US workshop explores role of US soy in non-ruminant diets 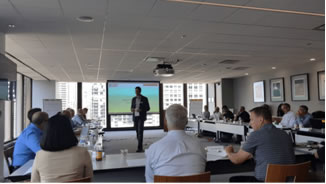 More than 40 US and international representatives from the animal nutrition industry, researchers, and academia took part in the ANWG workshop held on August 19 and 20 in Chicago, Illinois, the United States.

The workshop looked at soybean meal energy improvement and development of nutritional knowledge relevant to US soybean meal usage and improvements. Participants reviewed soy's nutritional value for feeding animals, anti-nutritive factors present and ways of eliminating them, and utilisation in animal feeds, as well as future challenges of using soy as a key source of protein in animal feeding.

The advantage of US soy's higher amino acids digestibility was also discussed in the context of antibiotic-free production around the world and the growing importance of animal health. It is widely known that animals fed with poorly digestible ingredients and diets are at risk of developing larger intestinal microbial populations, particularly in stressful environments.

In such conditions and in the absence of antibiotic growth promoters, there will be an increase in variability in animal performances. Based on the results of recent research conducted at Madrid University, Spain demonstrated the superiority of US soybean meal in amino acids digestibility compared to other origins, which should help nutritionists to formulate for optimum nutrition.

The ANWG meeting helped participants to better understand and agree how to position US soy as a long-term viable product versus competing products, according to the USSEC. The workshop also set key direction and priorities in soy research for the coming period.