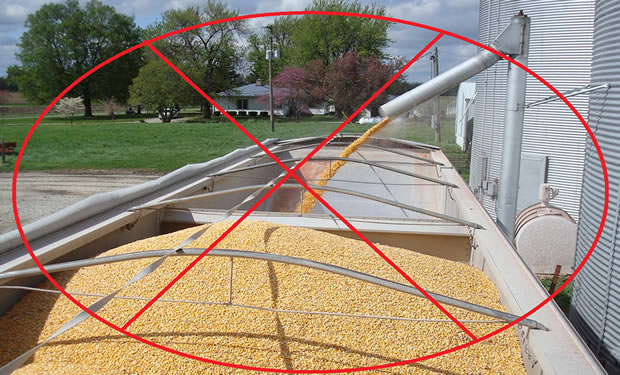 Although the USDA's final WASDE report of 2013 kept its US 355.3 million tonne corn harvest and 132.1 million tonne domestic corn feed demand estimates constant, higher ethanol output and mounting export volumes made it increase its projected 2013-14 corn exports and corn used in ethanol by 1.27 million tonnes respectively. That was partly counterbalanced by a 0.127 million tonne upward revision in Canadian corn import volumes (which are used for ethanol distilling) can also be used to boost America's domestic corn supplies.
China impacts domestic corn price, not world price
The overall impact was to add 2.41 million tonnes to corn, forcing it to bring its estimated US closing corn inventories down from 47.94 million tonnes to 45.53 million tonnes. The resulting 13.7% corn stocks-to-use ratio is on the low, but neutral side of America's normal inventory range. However, with large harvests expected in South America and the projected 2013-14 closing world corn stocks-to-use ratio at a comfortable 17.6%, the market remained stable.
But late December saw a widely misunderstood market upset. Citing the trace presence of banned GM corn in shipments, China turned away several US cargo ships carrying a cumulative 545,000 tonnes of corn. With GM corn present in only trace amounts, China did not fear the trace GM corn in the shipments as much as it worried the imports would exert downward pressure on their domestic corn price, which have a government-mandated floor of roughly US$9.22/bushel.
But the deflationary blow of this measure was counterbalanced by late December news while China was rejecting those corn shipments, the third week of December saw new export sales of 1.48 million tonnes, nearly double analysts' expectations of 750,000 tonnes. The higher pace of US corn exports, cancelled earlier shipments, higher ethanol demand and higher corn import volumes from Canada cancel each other out.
But while America's corn stocks-to-use ratio is more than double last year's level, it still is on the historically low side compared to the post World War II average. Therefore, until new, non-American corn hits the market, the cancellation of China's corn shipments, though disruptive of daily trade, does not materially impact corn's medium term outlook. Hence, China's cancellation of US corn imports was bullish for China's domestic corn price but it did not have a bearish impact on the world market.
But there is a limit to how many US corn import shipments China can cancel: Although it is not unusual for corn prices to sink in the post-harvest months, six weeks after the cyclical post-Chinese New Year lull in livestock production, the country's feed demand -and domestic corn prices -will both turn up. By the second quarter, corn imports will likely be required; not just to make up for the inventory drawdown that occurs over the first two quarters of any year, but to replace the unusually large proportion of Chinese corn which gets degraded by molds and mycotoxins.
But it should also be noted that China also rejected American DDGS shipments on account of GM corn contamination. With China's port inspectors now inspecting all DDGS imports for the presence of Syngenta's unapproved MIR 162 corn gene, the 450,000 tonnes of US DDGS which were to enter China's feed market during January and February will now not pass inspection before late March or early April.
Beware of soy's bullish deception
With less DDGS available in the first quarter, many analysts assume that more soymeal -and imported soy- will be required by China's livestock sector. -But we must warn you that such an assumption does not take into account how Chinese culture impacts seasonal feed demand.
On one hand, with 90% of the USDA's projected 2013-14 American soy export volume already ordered and 8 long months left in this marketing year, it looks like America's soy market has gotten to a bullish start. On the other hand, with CBOT reporting a huge buildup of soy put options on contracts that end in the first quarter of 2014, a lot of investors are betting that while many US soy export orders will be cancelled.
The reason China can confidently reject feed input imports, be they corn, soy or DDGS, is because by the time late 2013's import orders reach its feed mills, livestock inventories will have already crested and started their cyclical first quarter plunge, which stretches from the week before January 31st's Chinese New Year to approximately six weeks thereafter, in mid-March.
China knows full well that by then, cheaper Latin American corn and soy will become available.  This bloating of world corn and soy markets with South American supplies will coincide with the third and fourth month of the Federal Reserve Board's "tapering off" of monetary stimulus.
With corn and soy becoming more plentiful just as market liquidity starts drying up, the script for a feed crop price deflation, or at the very least, price stagnation, is being written. Moreover, soy's price has consistently traded 3.1 times higher than corn for several months now. Should this soy/corn price ratio be maintained, it will skew US crop planting intentions in favour of soy and away from corn.
Hence, China's feed demand is turning down, making its import cancellations irrelevant. When its feed demand undergoes its second quarter upturn, with more corn, more soy and less liquidity available, prices will have nowhere to go but down. Nothing short of a serious second quarter weather upset can shake this forecast.