The cost of pig meat production in Great Britain increased 8% to £1.37 (US$1.74) per kilogramme in 2017, in line with an increase in the costs of production across all sampled EU countries, according to the newly released "2017 Pig Cost of Production in Selected Countries" report of the UK levy body Agriculture & Horticulture Development Board (AHDB).

The average cost of production in the EU increased 7% to £1.36/kg in sterling terms compared with 2016.

The report noted that there was a difference of 8.5 pigs weaned per sow per year between the highest- and lowest-performing EU countries.

The lower numbers of pigs weaned per sow per year in Great Britain was still a major cause of the relatively high cost of production compared with many other EU countries, especially Denmark. This is an area that needs to be addressed by Great Britain, for it to be competitive with the rest of Europe, AHDB suggested.

"While our improvements have been driven by a combination of increased number of finished pigs at increasing carcase weights, the greatest challenge for our pig industry is maximising the number of pigs weaned per sow per year…, AHDB Pork's Lead Analyst Carol Davis said:

"We have a challenge competing like for like with some of our global competitors, therefore we need to look for more novel innovations to lower our cost of production. This may be using lower value land for outdoor production, or adopting modern technology to target attention on and selection of individual pigs."

The "2017 Pig Cost of Production in Selected Countries" report can be downloaded at: https://www.ahdb.org.uk/knowledge-library/2017-pig-cost-of-production-in-selected-countries. 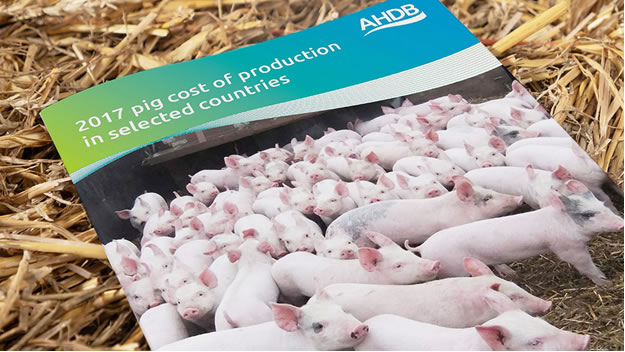