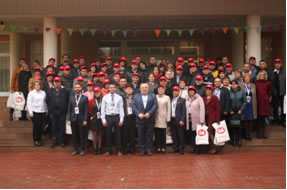 In October this year, more than 130 participants representing 80% of Russia's poultry industry took part in the Cobb Russia Annual Technical Seminar at the Yakhont Hotel in the Moscow region.

"We invited all of the regional chicken producers and many significant groups attended," said Konstantin Tishenkov, general director of Cobb Russia. "It was a very well organised meeting with a great range of topics. Our entire Cobb Russia team put in an exceptional effort to make the seminar such a success."

"This seminar is a good opportunity for middle and upper management levels to become familiar with the industry's latest technological developments, as well as to meet and exchange ideas with each other," Tishenkov added.

Jan Mascheck, director of Wimex Group, the largest European broiler hatching egg and day-old chick producer, said the sales growth of Cobb in the Russian market over the last few years reflects how producers across the world are benefiting from the Cobb500™ broiler.

Production costs are the key to profitability in such a competitive market, he said, and in areas of feed conversion, feed costs and meat yield, the Cobb500 appears to have a significant advantage.