Research results unveiled during the company's LifeStart symposium in the Netherlands in mid-October revealed that an increased focus on dietary needs during a calf's critical early life period can lead to "profound" metabolic changes, particularly in relation to energy metabolism and organ development. Symposium delegates were also told that LifeStart's impact continues well beyond the initial two-month feeding programme. 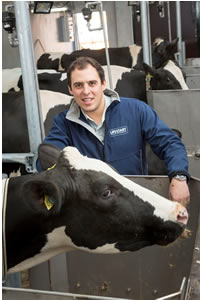 Trouw Nutrition researcher, Leonel Leal, illustrated the company's "lasting gain" argument by presenting early data from an on-going LifeStart study in which one batch of calves was fed 1.2 kg of milk replacer a day during its first 56 days, in comparison to another batch which was given a more conventional 0.6 kg/day.

"The 1.2kg/d batch, assessed one week before weaning at 49 days of age, showed significantly different metabolic profiles than the calves which were on the conventional diet," said Leal. "There is also clear evidence that the higher level LifeStart approach, applied pre-weaning, is inducing significant changes in metabolic profiles right through to 11 months of age."
The symposium, which drew delegates from 41 countries to Trouw Nutrition's calf and beef research facility in Sint Anthonis, also included presentations on the development of the digestive tract, nutritional strategies pre- and post-weaning and the role of early life nutrition in building immunity. This was all set against the underlying theme that the first 60 days of a calf's life is a "critical window of opportunity" which farmers need to understand better and exploit more effectively than they are doing at present.

"Early life nutrition is extremely important in preparing humans and animals alike for what they can expect to face later in life," said Prof. Dr. Leo den Hartog, Trouw Nutrition's R&D director. "In humans the early life period lasts for about three years while for calves it's the first eight weeks, in piglets it's the first five to six weeks and in chicken it's the first three days. If you don't feed correctly in those periods, whatever the species, you will never achieve the best results later in life." 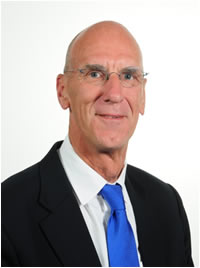 "The idea that better early nutrition has a marked impact on performance levels later in life has been around for a long time, we didn't know the mode of action required at farm level to deliver the best results," said den Hartog.

"That's why we launched the LifeStart Program, including setting up the studies from which we've now released our early findings. We have another two years to run on this work but the data delivered so far is already impressive, most notably the identification of the lasting impact of the early life focus.

At the end of the first 49 days feeding period, 47% of all the metabolites analysed (approx. 900 metabolites) were significantly different between

the two dietary treatments (1.2kg/day vs. 0.6kg/day). Although both batches of calves were then put on exactly the same diet from 56 days onwards, 3% of all metabolites were significantly different  when recorded one year after weaning. That's a significant lasting effect."

Pointing out that farmers in the future will be required to produce more animal protein while, at the same time, reducing the resources and emissions involved in agriculture, den Hartog said that knowing how to feed livestock in an optimal way will become increasingly important.

The symposium also addressed the current high variation in performance between farms in the Netherlands in relation to calf mortalities.

"Average calf mortality from 3 days to 3 months of age is 6-7%, although 44% of Dutch farms had no mortality during this period, according to figures gathered in the last quarter of 2015," said den Hartog. "There are huge opportunities for improvements to be made, therefore, as, on average, the productivity of farm animals is currently at 30-40% below their genetic potential. Even if we could halve that performance gap, which should be possible, we could save a lot of resources and emissions."

Persuading farmers to invest in early life nutrition with the promise of better health and performance returns showing through later is a challenge, however.

"Whenever you change a feeding system you need to understand exactly what you are doing, which is why our LifeStart work began with basic research, run in partnership with the two universities," said den Hartog. "We then had to validate the observed results, obtaining data from what can be achieved on commercial farms. Only then will farmers start to realise that investing in young animals pays off later on.

"It's always difficult for producers in that when they invest in the first period of dairy heifer development they feel they're just spending money. It's important to also show them they can expect to earn more money later on as a result."

Picking up on the same investment-and-return-challenge, but from a different perspective, Prof. Alex Bach of IRTA (research institute in Catalonia) told delegates it was definitely more cost-effective to give calves extra nutrients in early life, to boost growth rates, than to leave feeding increases until later.

"Every 100 grams of nutrients given to a calf in its first 60 days will deliver 60 grams of growth," he said. "Later in the development process you would need one kilo of feed to get 70 grams of bodyweight, making the process more expensive than the early life option.

In cash terms one kilo of calf bodyweight early in life costs 2.5 Euro while later on the cost rises to 2.8 Euro."

Prof. Bach also gave delegates a pretty sharp wakeup call with his comment that while milk production levels have doubled in the last 30 years, the industry is still falling behind rising consumer demand, with calf 'failures' at the heart of the problem.

"We have a horrible 17% new product failure rate in our industry," he said. "By new products, I mean calves, of which 17% don't make it from birth to lactation. That really is horrible. Imagine what would happen to Renault or Mercedes if they had a new product failure rate like that!"
Know more about Trouw Nutrition's LifeStart at:
http://www.lifestartscience.com/en/ruminants/