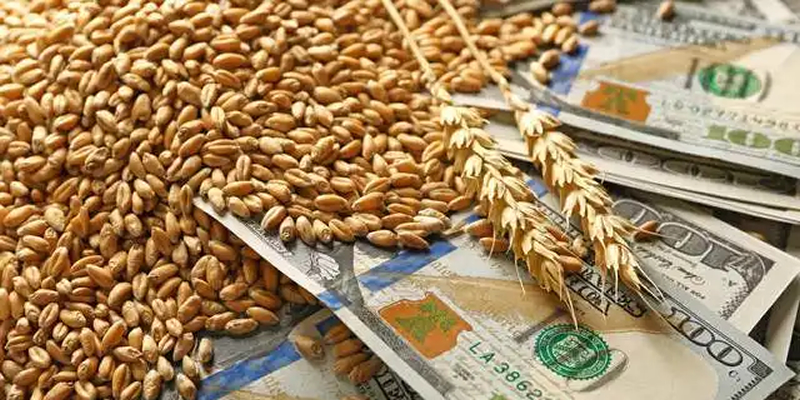 Wheat prices surged as Russia announced that it has suspended its participation in a safe-passage deal for Ukraine commodity exports, even though Ukrainian ships loaded with crops have set sail, as Moscow said shipments are riskier without its involvement, Bloomberg reported.

While shipping and insurance costs are likely to increase even if shipments continue, wheat prices shot up as traders concentrated on the unknowns and questions surrounding Russia's upcoming actions. Before the current agreement's November 19 renewal deadline, new deals for Ukrainian exports had already started to dry up. One of the biggest producers of wheat, corn, and vegetable oil in the world is Ukraine, and the July agreement to open three Black Sea ports has been crucial in easing the world food crisis.

Ukraine and its allies strongly condemned Russia's announcement that it would discontinue participation in the safe-passage agreement, which was mediated by Turkey and the UN, and US President Joe Biden warned that it would lead to an increase in starvation.

After discussions with all parties to the agreement, Turkey and Ukraine agreed to allow food-transporting vessels to continue leaving Ukraine, the UN said late on Sunday. Both inbound and outbound ships will continue to undergo inspections at the Istanbul coordination centre, and new ships are also expected to arrive in Ukrainian ports. The UN claimed that Russian delegates were informed.

Dmitry Peskov, a spokesman for the Kremlin, stated on Monday that the suspension of Russia's participation has made grain shipments from Ukrainian ports on the Black Sea "much riskier," but he would not elaborate on the conditions Moscow is putting forth for resuming participation. On the future of the pact, he claimed that diplomatic discussions with Turkey and the UN are currently taking place.

Ukraine had earlier said that Russia had attacked it with a large number of missiles after the Kremlin accused Kyiv of attacking its Black Sea fleet and cancelled a grain export agreement.

Ismini Palla, a UN spokeswoman for the Black Sea Grain Initiative, said the ships are leaving Ukraine on the grounds that Russia has only temporarily suspended its participation in carrying out the deal but is still a signatory to the agreement. In accordance with the initiative's guidelines, all parties consented to refrain from launching attacks against civilian and commercial vessels.

Especially in light of senior Russian officials' repeated criticism of the agreement and their suggestion that any extension would necessitate difficult negotiations, the grain-corridor agreement needed to be renewed. The growing backlog of ships awaiting inspection as required by the agreement has also slowed exports; Ukrainian President Volodymyr Zelenskiy, said some ships have been waiting for three weeks.

Michael Magdovitz, senior commodity analyst at Rabobank, said vessel and insurance costs to Ukraine are expected to increase. Matt Ammermann, commodity risk manager at StoneX, said the number of new deals coming out of the nation had already started to decline because traders were reluctant to take the chance of missing the deal's deadline.

Russia, which exports the most wheat globally, has the potential to make up some of the lost revenue. However, it will be important to monitor how the most recent developments affect shipping costs throughout the entire Black Sea region, Ammermann said.

As the war raged on, insurers and ship owners weighed the risks of transporting cargo through the Black Sea, and the grain-corridor deal was met with obstacles and scepticism.

There is still a long way to go even though Ukraine has shipped more than 9 million tonnes of cargo since the corridor opened, including more than 4 million tonnes just this month. Farmers are currently reaping a new harvest while also planting wheat and barley that will be harvested the following year. Silos were already overflowing with last year's crops when seaborne exports resumed.

Following drone attacks on its naval fleet on Saturday, Russia withdrew from the agreement, claiming without proof that one of the drones may have originated from a grain ship taking part in the Black Sea initiative. Ukraine vehemently refuted the charges.

The UN predicted late Sunday that four ships would arrive and twelve would depart through the Ukraine corridor on Monday. The deal will be discussed with his Russian counterpart Monday evening, the Turkish defence minister said.

Andriy Kupchenko, head of analytics at APK-Inform, said the grain corridor is a powerful channel for the export of Ukrainian agricultural products, and the closure of this channel is critical, both for the domestic market and for the global market.