Main causes of changes in liver coloration in poultry

Main causes of changes in liver coloration in poultry

In many poultry markets around the world where chicken viscera are commonly sold in supermarkets, the appearance of the liver is very important for marketing purposes. Customers have a tendency to associate the health status of the birds with the color of the livers displayed in the shelves in stores. If the organ looks pale, yellow or congested, it is generally assumed that something went wrong in the farm and that the animal got sick before being slaughtered. In our case, we frequently visit slaughterhouses to identify the origin of these changes.

Anatomically, the main structural unit that conforms the liver are microscopic cells called hepatocytes. When hepatocytes are loaded with fat or pigments, as a consequence of some of the elements that we are going to describe in this article, some changes in color will be observed. The main factors involved with coloration changes in young and adult commercial birds are the following: physiological, nutritional, ingestion of toxic substances, and/or management-related practices before slaughtering.

During the first week of life, young chickens and turkeys normally have large amounts of fat and pigments (carotenoids) deposited in the liver as a result of the mobilization of the yolk content through the intestines. At this stage, it is normal to detect fat vacuoles (microscopic fat deposits) inside the hepatocytes. The yellow color present at birth can last several days, while the fat/pigments are mobilized from the liver to other parts of the body. Usually, after approximately seven days of age, the liver of a normal bird will show a mahogany-brown coloration.

In adult hens, the amount of fat in the liver increases before the point of lay because of the effect of estrogens, hormones present in higher levels once maturity is reached. Usually, most laying hens in a flock will show a pale brown or yellowish liver because a lot of fat and pigments are transported from the liver to the oviduct to form the yolk of the eggs (picture 1). Histopathology is a very important tool that can be used to establish a differential diagnosis when livers appear yellow or pale. It will allow the differentiation between the microscopic damage produced by physiological changes or intoxication with mycotoxins such as aflatoxin (AFLA), T-2 toxin (T2) and/or fumonisin (FUM). 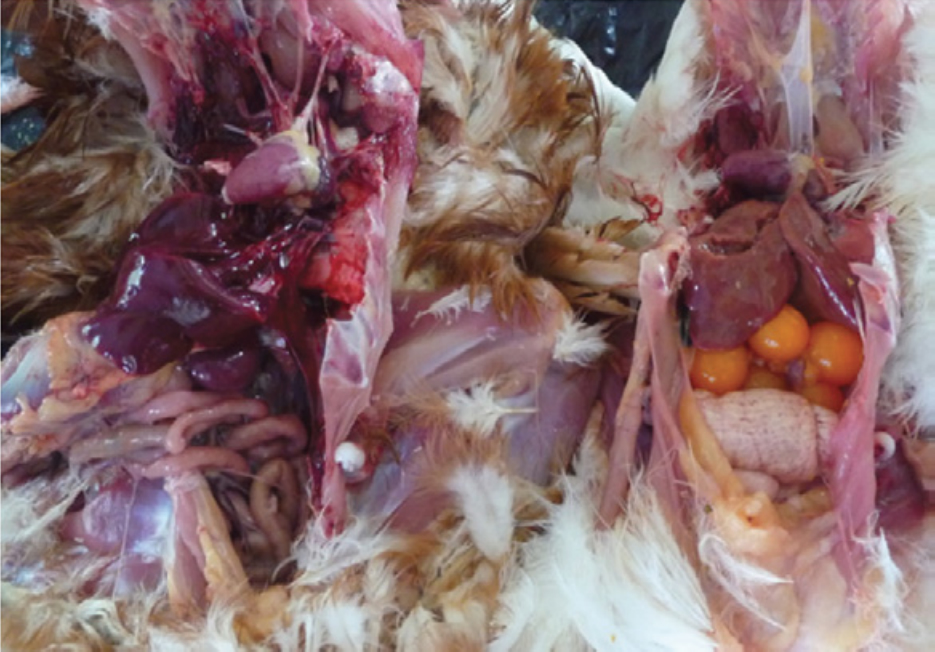 Picture 1.  Normal liver (yellowish, pale) in a laying hen to the right and a dark brown liver of an out of production hen to the left.

Gross lesions include the presence of pale, blotchy and enlarged livers and kidneys with some mortality, usually below 10%. Microscopically, fat infiltration is widespread in different organs. It has been mainly reported in broilers and pullets (layer-type) during the first 4 weeks of life. However older flocks can show the condition.

This syndrome is characterized by yellowish, enlarged livers engorged with fat. The presence of hemorrhage in the abdominal cavity is typical but not always present. This syndrome is a metabolic disorder of hens as a consequence of a nutritional imbalance (energy/protein). Feeding low protein-high energy diets or a ration containing an amino acid imbalance or deficiency, can be responsible for the syndrome. It has been well established that feeds with low levels of lipotropic factors, such as choline, methionine and vitamin B12, can result in fat infiltration of the liver. Microscopically, the presence of vacuoles inside the hepatocytes of laying hens is normal. Hepatocellular fatty vacuolation (microscopic holes or blank spaces in the liver) or degeneration of hepatocytes refers to the excessive accumulation of globules of triglycerides and other lipid metabolites within the cytoplasm. Hepatocytes overloaded with lipids will produce necrosis. In commercial conditions, around 45 weeks of age, healthy flocks will include some hens affected by FLHS. This doesn't mean that the whole flock is showing the syndrome. The pale and yellow color of the liver, while characteristic, is not always specific to FLHS, since normal layers that are fed appreciable quantities of yellow corn or high levels of xanthophyll tend to show this coloration. Frequently, we are asked how to differentiate FLKS from an intoxication with mycotoxins. In the latter case, hens show a yellow liver with petechial hemorrhages without excessive abdominal fat deposits (picture 2). If the syndrome is the result of a metabolic disorder, the abdomen will contain thicker pads of fat in the cavity. This is just a clinical observation that is not necessarily always present in field cases. 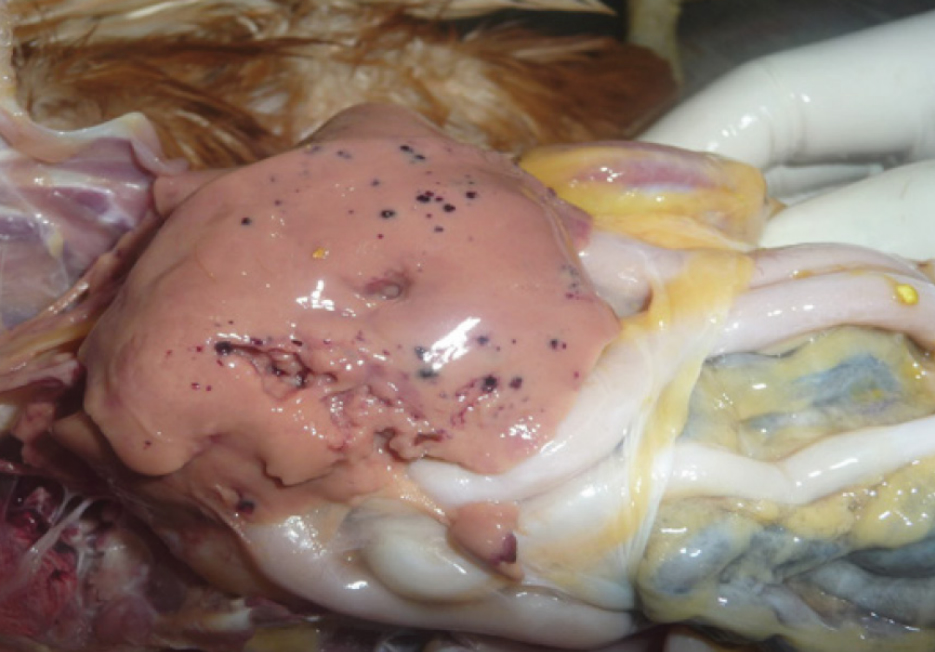 Picture 2.  Liver of a 46-week-old brown layer fed a diet expearimentally contaminated with 3 ppm of aflatoxin for 41 days. Notice the presence of petechial hemorrhages in the surface of the liver and the lack of fat deposits in the abdominal cavity.

Toxins such as mycotoxins, heavy metals and some poisonous plants can have a serious effect on the physiological performance of the liver. AFLA, one of the most toxic mycotoxins identified in nature, can cause fatty vacuolation and hepatocyte necrosis. Also, bile duct epithelial hyperplasia and fibrosis can be detected. It is important to point out that AFLA will affect the mitochondrial and protein synthesis capacity of the liver, which means that the organ will not be able to manufacture critical substances normally secreted by the body. Mycotoxins such as T2 can also damage the hepatocytes causing hemorrhage and necrosis. The presence of pale bile content (bilis) is associated with AFLA because of a reduction in amylase, lipase and biliary salts production by the liver. The final result is the presence of excessive levels of fat in feces (steatorrhea), which is difficult to detect grossly because chicken excrete urine and feces together through the cloaca. The bile also contains amylase, which aids in the digestion of carbohydrates as well as activation of the pancreatic lipase. Regarding the effect of FUM in the liver, we must emphasize that even though the performance (gain weight, feed conversion, etc.) of the flock could be affected, this toxin does not cause distinctive macroscopic changes in the liver, even when 100 ppm of FUM was added experimentally to the diet in a scientific trial. Macroscopically (gross appearance), only certain degree of paleness has been reported. The damage to the liver is established by measuring the concentration of metabolites (biomarkers) of sphingolipids (sphinganine/sphingosine) in the blood and a reduction in the concentration of protein in the blood. Microscopically, some scientific papers have reported hyperplasia of the bile ducts, as is reported in cases of aflatoxicosis.

This is a factor that is more important and common in broilers because of the traditional management practices followed in this type of birds. Generally, the access to feed is interrupted for approximately 12 hours before broilers are slaughtered with the objective of reducing fecal excretion. This to avoid cross-contamination during transportation and the possibility of fecal contamination of the carcass during automated evisceration in the slaughterhouse. One of the consequences of fasting is the presence of changes in the color of the liver. Scientific reports have shown that full-fed broilers have lighter liver colors because of higher lipid content. Broilers fasted for 12 hours show darker livers because of lower levels of fat inside the organ. Other reports talk about the importance of deposits of glycogen in the liver and its effect of these element in the coloration of the liver is somewhat controversial. Glycogen is a very large form of glucose that can be broken down to yield glucose molecules when the bird needs it.

The gross appearance of the liver depends on the amount and distribution of blood inside the organ. When a chicken is bled before euthanasia by cutting the blood vessel located in the neck, jugular vein, the organ will look paler because there is less blood deposited inside the organ. On the contrary, if the chicken is not bled, the liver's appearance will be darker. These details make it more difficult to determine if the changes in color are the result of ante-mortem congestion or hyperemia. Once the livers are taken out of the abdomen and mixed with ice, you should notice that they look paler than when kept at room temperature.

In conclusion, there are many factors that must be taken into consideration when evaluating the cause of pale or yellow livers in broilers, pullets or hens. In many cases determining the etiologies of these changes are critical to maintain a high performance in commercial flocks.

Article made possible through the contribution of Manuel Contreras and Agrimprove
Video >
Technical Paper >
Early nutrition programming (in ovo and post-hatch feeding) as a strategy to modulate gut health of poultry
Healthy gastrointestinal tract (GIT) is crucial for optimum performance, better feed efficiency, and overall health of poultry. In the past, antibiotic growth promoters (AGP) were ...
What is the impact of diet on nutritional diarrhoea associated with gut microbiota in weaning piglets: A system review
Weaning is sudden and stressful and one of the most challenging periods in a pig's life. Newly weaned pigs are usually stressed by nutritional, psychological, environmental, ph ...
Feeding of brewers' yeast derivatives in calves enables excellent start in life
Due to their immature immune system calves are very susceptible to intestinal and respiratory diseases in the first weeks of life. Challenges, e.g. adverse climate conditions or so ...