Aflatoxins (AF) are a group of mycotoxins produced by Aspergillus molds. Aflatoxins can be produced both in the field while the crop is under growth as well as during harvesting, storage and transport of raw materials and animal feeds. Aflatoxin B1 (AFB1) is the most well-known and researched mycotoxin due to its carcinogenic effects (Figure 1). It is also the most common aflatoxin detected in various raw materials and animal feeds.

Figure 1.  Structure of aflatoxin B1 and M1

Among all the mycotoxins, AFB1 is the most problematic to food safety due to the bioconversion of aflatoxin B1 to aflatoxin M1 (AFM1, Figure 1) in liver and then the excretion into milk. Aflatoxin M1 can cause liver cancer in animals and humans and hence regulated in most countries. Although dairy animals can degrade most of the mycotoxins in the rumen, the degradation of AFB1 is minimal. On top of this AFM1 is as toxic as AFB1 to dairy animals.

Impact of aflatoxins in dairy animals

Dairy animals develop clear signs after the consumption of AF at higher concentrations and early indicators may include reduced milk production, photosensitization and, most importantly, reduced immune responses, including reduced responses to vaccination. Some of the acute, subacute and chronic effects of AFs are indicared in Table 1.

Aflatoxin in milk, cheese and yoghurt

According to the European regulatory authorities, AFM1 levels in milk for human consumption cannot exceed 0.05 parts per billion (ppb) which means complete feedstuffs are limited to 5ppb when used in dairy diets. FDA (US) regulations are less restrictive with an AFM1 maximum level of 0.5ppb in milk and 20ppb in dairy feed. Any milk that contains AFM1 above the regulatory limit is considered unfit for human consumption and should be discarded.

Despite mitigation measures, AF contamination continues to affect the dairy industry and cattle producers. In this regard, the amount of AFM1 in dairy milk may represent at least 1–2% of the ingested AFB1; however, several factors can affect this percentage, and high-yielding dairy cows can have AFM1 levels in milk that are even above 6% of ingested AFB1 (Frazzoli et al., 2016). For example, model calculations showed that vulnerable high-yield cows given feed that was within the EU limits for AFB1 might produce milk with AFM1 levels above the EU limit. Therefore, people who consume milk or dairy products from high-yielding cows might be exposed to harmful levels of AFM1.

The presence of AFM1 in the milk may also lead to AFM1 contamination in yoghurt and cheese. Yoghurt may compromise its nutritional quality by the presence of AFM1. Starter culture is a key factor for the fermentation quality in a yoghurt-making process. AFM1 was observed to negatively affect Lactobacillus bulgaricus and Streptococcus thermophiles, both of which are the main yoghurt starter culture.  Additionally, AFM1 is stable in the refrigerated storage of yogurt, meaning consumers are always exposed to the existing AFM1 which originates in the contaminated milk.

Even though cheese is an ideal substrate for mold to grow, cheese is not an ideal substrate for AFM1 production. AFM1 presence in cheese is mainly due to its residue in the contaminated milk. AFM1 presence varies among different types of cheeses, usually along with a reduction of AFM1 concentration during cheese manufacture processes. This reduction varies between 15% and 65% due to different factors, e.g. cheese type, processing technology, water loss during processing, original level of AFM1 in milk and even the analytical methods applied. Under certain storage conditions, this AFM1 reduction can be fully recovered in cheese. AFM1 itself is not eliminated by any cheese manufacture processes.

The economic impact of aflatoxins in the dairy industry is highly significant. An integrated approach including a proactive monitoring action plan for forages and grains and farm management can prevent such economic losses. The most used mitigation techniques are the selection of seed varieties that have Aspergillus mold resistance, and practicing crop rotations with plants that are not susceptible to Aspergillus spp. These methods can reduce the number of infectious spores in the soil. The application of chemical agents to animal feed before ensiling can also prevent fungal growth.

Sequestering agents, such as hydrated sodium calcium aluminosilicate (HSCAS) or bentonite clays, may be added to the diet to reduce the overall impact of AF on cattle health. HSCAS is a naturally occurring and heat-processed montmorillonite and bentonite is produced from the weathering of volcanic ash and predominantly consists of smectite clay. The smectite group of clays, which includes montmorillonite, is characterized by a 2:1 layered structure and swelling capacity. These agents, or adsorbents, can limit the bioavailability of AF through ion exchange, and thereby decrease the levels of AF in dairy milk (Gallo et al., 2020).

If you find yourself with contaminated feed, here are five steps that you can take to protect not only the health of your animals, but also the safety of your milk and human health.

·  Work with your milk company, nutritionist and feed supplier – having a positive result for AFM1 in milk is a very frustrating experience but can be solved rapidly with an integrated and consistent team approach. Analyze and detect AFB1 in the cereals and feed as well as AFM1 in the milk allowing for a better determination of the source and early diagnosis of the risk.

·  Understand the level of contamination in milk - The primary step you can take to protect your milk supply and start to define your action plan is to monitor aflatoxin levels in milk. A dairy cow secretes about 1% to up to 6% of the aflatoxin consumed in the feed into the milk. As aflatoxin M1 in milk is quite stable, the level in milk will help you to back calculate the levels of total aflatoxin in the feed.

·  Contribution of feedstuffs – Monitoring of grains is very critical as this fraction of the diet contributes the most to the total AFB1 intake. Both silages and corn grain can harbor aflatoxin, but don't forget to include by-products and other purchased feedstuffs which were originated in heat-stressed areas or are stored for longer periods of time after the analyses. (Ex: Some corn by-products as corn distiller grains and gluten feed can contain up to 3 times the level of aflatoxin in the original corn raising the total aflatoxin levels in the total diet).

·  Take action - Since AFB1 levels in feed of less than 20ppb (5ppb in EU)  is needed to control AFM1 in milk, controlling AFB1 in feed is very critical. Appropriate actions need to be taken in this regard;

-  Use alternative clean forages and raw materials - This can be accomplished with alternative available forages and grains, such as alfalfa hay/silage, wheat, barley, commercial protein supplements which are tested negative for aflatoxin. Make sure you work with your nutritionist to maintain energy and protein balance to meet the cow's maintenance and production requirements.

-  Use a proven mycotoxin binder – Supportive strategies as the use of a mycotoxin binding product, should be added to the feed to alleviate the effects of mycotoxins to the animals and to reduce the transfer of aflatoxin M1 to the milk. If aflatoxins are the only issue, a smectite-based clay has been proven to be highly effective in reducing the transfer of aflatoxin M1 into milk. If the feed contains other mycotoxins, it is recommended to use a broad spectrum toxin binder without compromising aflatoxin binding ability.

A Recent Study on Aflatoxin M1 Management in Milk

Overall, the addition of AFB1 reduced the DM intake, but the groups had no significant differences in milk yields. Measurement of AFM1 in milk indicated a "plateau" period, from day 4 to day 10 of the intoxication period, when the AFM1 level exceeded the guidelines of the European Union. The commercial smectite clay reduced milk AFM1 concentration by 64.8% and reduced the carry-over by 47.0% (Figure 2). The CTR-0 and TRT groups had similar carry-over levels of AFM1, although the absolute concentrations differed. The groups had no significant differences in plasma biomarkers. These results indicate that the commercially available smectite clay tested here was effective in adsorbing AFB1 in the gastro-intestinal tracts of cows, thus reducing the excretion of AFM1 into dairy milk. 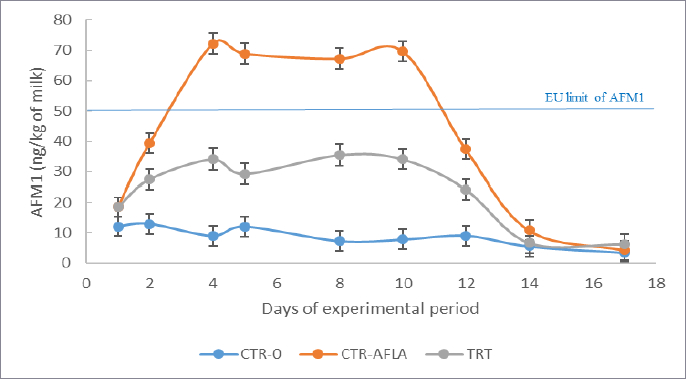 Figure 2.  Effects of Toxo-MX in lowering AFM1 M1 in milk of Holstein cows. The "plateau" (steady state) period was from day 4 to day 10.

Article made possible through the contribution of Swamy, H.V.L.N., van Kuijk, S. and G. Wang, Trouw Nutrition, The Netherlands