Is the EU losing its importance as a supplier of pork and offal to the Philippines? This seems to be the case as shipments from the EU during the first half were down by 15% to 23,000 tonnes as per data from the Philippine Statistics Authority and as reported by AHDB Pork.

The downturn came even as total imports of pork into the Philippines , which is a growing market for pig meat products, were up by 7% (+3,200 tonnes) in the first six months.

In the second quarter alone, the decline in EU shipments to the Southeast Asian country was even greater at 32%, reflecting displacement by Canadian pork. This meant the EU's market share fell from over 66% in 2015 to under 50% for this year so far, the pork division of the UK levy body Agriculture & Horticulture Development Board said.

Average import prices were higher in the first half of 2018, rising by 6% in Philippine pesos. However, in euro terms—as the peso has declined against the euro—this was a decline of 8%. According to AHDB Pork, this meant the value of EU pork exports to the Philippines decreased by €9 million (US$10.34 million) year-on-year to €31 million ($35.6 million).

The EU also lost share in the even more important pig offal market in the Philippines. While the country's offal imports were up by 26% overall (+23,000 tonnes) in the first half, EU shipments were up by only 23% (+16,200 tonnes), which meant that its share dropped back to 80%.

"This is two percentage points below a year earlier, although still above 2016 levels", AHDB Pork said.

As with pork, average import prices of offal were higher in Philippine terms but lower from a European perspective. The value of this trade to the EU increased 14% to reach €78.2 million ($89.84 million) during the first six months of the year. 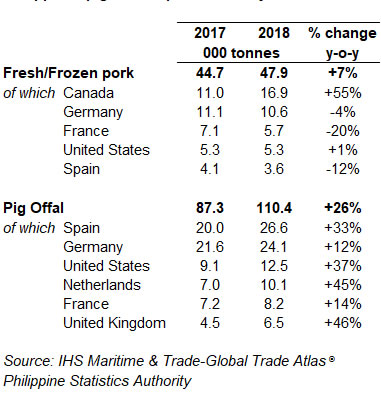