eNewsletter
September 23, 2014
Palm to create an oilseed feed bonanza?
Helped along by export tax cuts, palm oil is undercutting soy oil, bruising the latter's exporter crushing margins and threatening to bring protein meal prices down another notch.
by Eric J. BROOKS
An eFeedLink Exclusive Commentary
Having already fallen below US$3.30/bushel, corn entered the deflationary downtrend first and is approaching its market bottom. On the other hand, the oilseed complex increasingly looks set to drop another 10% or more, with soy possibly falling near US$8.00/bushel for some time -enough to discourage South American planting intentions, at least for the second season ('sahfrinha') Brazilian plantings. That is because livestock farms look set to benefit from an oversupply of palm oil.
Bumper palm, soy crops lead to export tax cuts
After an early 2014 southeast Asian drought broke in March and neither El Nino nor its accompanying dry spell upset ASEAN palm oil production as widely feared, a problematic oversupply situation emerged, complete with a downstream complication: Indonesia's palm oil refinery capacity is up nearly 50% in two years, from 30.7 million tonnes in 2012 to at least 45 million tonnes by the end of this year. 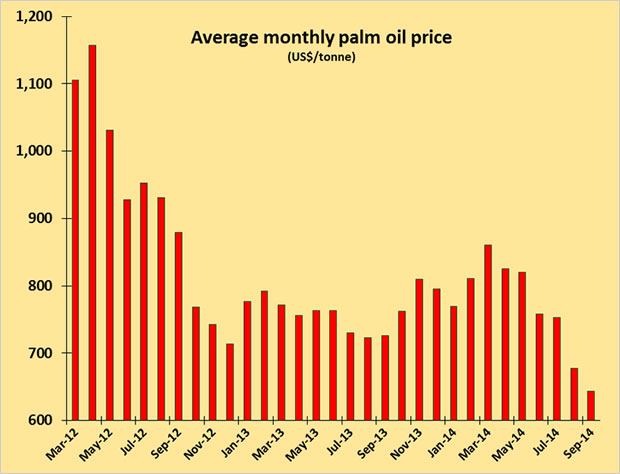 With palm supplying 62%of the world's vegetable oil needs, the last thing the commodity needed was competition from a silo-busting record US harvest and falling CBOT soy. The latter was trading near US$14.00/bushel in April and fell by over a third, to US$9.25/bushel by late September.
Palm oil similarly fell 28%, from RM2,910/tonne (US$911/tonne) in mid-March to RM2,091/tonne (US$643/tonne) in mid-September. The large soy crop meant that palm's feed fundamentals also fared badly, with palm oil kernels falling in price by a similar amount.
Other oilseeds and their meals also followed suit, with rapeseed, cottonseed, soy and their meal and oils all falling roughly 25% to 30% over this time -but it now looks like a new round of deflation is in the offing for all of them. 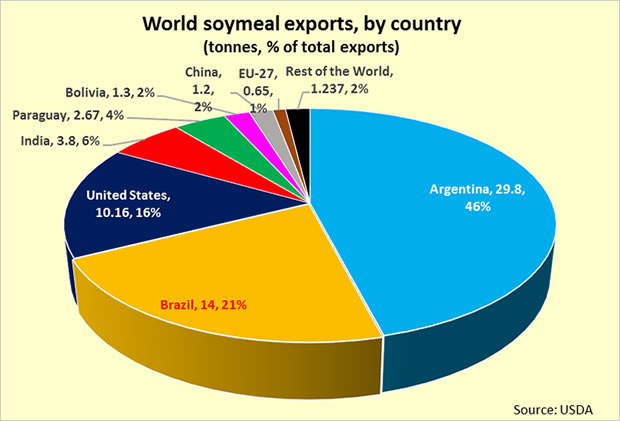 Disturbed by the emerging world vegetable oil glut, late August saw Malaysia slash its palm oil export tax and exports immediately responded. Shipment volumes rose 30% in the first week of September compared to the same period in August. The country's exports to China doubled over this time and observers expect India to take advantage of the situation, but will probably after Indonesia responds to Malaysia's move.
To keep its own exports competitive, Indonesia also intends to cut taxes in early October: It usually stops taxing palm oil exports when its price drops below US$750/tonne, and palm is trading well below this price at this time.
Despite their competiveness-driven export tax cuts, Southeast Asian palm producers actually have very little to fear from each other. Given that palm oil is currently more than US$105/tonne cheaper than Argentine soybean oil, Malaysian and Indonesian palm oil are more likely to steal market share from soy oil sunflower oil than from each other.
Palm deflating Latin crushing margins, soymeal exports
Consequently, these market moves are expected to slash soy crushing margins, especially in major soymeal exporting countries. Exporting a USDA estimated 29.8 million tonnes and 14.0 million tonnes of soymeal in 2015 respectively, Brazil and Argentina make up roughly 66% of world soymeal exports, with the US a distant third at 10.16 million tonnes. More importantly, the US only exports 25% of its soymeal production, compared to 96% for Argentina and 49% for Brazil.
Consequently, while US soy crushers will have lower soymeal and soy oil prices partly offset by falling soybean costs, Latin American crushing returns will be hit more severely by palm's market gains in the vegetable oil export market.
Depending on whether you are a livestock farmer or a protein meal seller, these circumstances translate into more blessings or woe. With Latin America's more export-oriented soy crushing margins expected to take a dent, its soy crushing volumes may fall below forecasts, making a for potentially larger than expected South American soya bean inventories. Provided South America's growing weather is co-operative, that could push CBOT soy close to US$8/bushel.
With cottonseed and rapeseed markets also in oversupply situations, it could create a bonanza for livestock farms seeking inexpensive protein meals. South America is the only part of the world with substantial unused soy growing land but until soya beans rise above US$9/bushel, it would not be economical to bring additional acres into production. Smart livestock farmers and integrators will know this. Expect them to snap up as much soybeans, rapeseed, cottonseed, palm kernels and their meals as they can if palm causes soy's price to sag over the next few months.