Summary: Phytate is the main storage form of phosphorus in all grains, which represent the basis of most plant-based diets used in animal production. To improve phosphorus availability and tackle phytates antinutritional effects, phytases have been increasingly used in animal feeds over the past thirty years. Effective phytases are currently available in the market, but there is still room for improvement.

Phosphorus plays a key role in metabolism and physiological processes, such as bone development and maintenance, energy utilisation, protein synthesis, and efficient feed utilisation. Because monogastric animals lack phytases, which are enzymes that break down phytate, these started being added to animal feeds to maximize the bioavailability of digestible phosphorus. After the first commercial phytase extracted from fungi entered the market in 1991, phytases became widely used in animal nutrition. Later on, microbial phytases replaced fungal phytases. This new generation of microbial phytases became the top choice for the animal feed industry due to their increased activity, proteolytic resistance, and catalytic efficiency.

Phytate is not hydrolysed in the phytase-free monogastric gut, thus keeping the natural sources of phosphorous available in feeds unabsorbed. To avoid phosphorus deficiency, inorganic phosphate is added to diets. However, this represents a financial burden to producers as phosphate supplementation is generally provided through calcium phosphate, one of the most expensive nutrients in feeds. Moreover, phytate has been shown to reduce animal growth performance. The antinutritional effects of phytate are linked to its ability to bind with protein and calcium and inhibit the activity of digestive enzymes, such as pepsin leading to an increase in endogenous losses and shifting energy away from growth. Phytate also reduces nutrient digestibility within the small intestine, and impairs the proper absorption of several minerals, such as calcium, magnesium, iron, and zinc.

The phytate issue began to be tackled with the establishment of phytase supplementation. Phytases break down the phytate available, thus capitalizing on a source of phosphorus that otherwise would be unused, reducing the need for supplementing diets with phosphate. But the benefits of phytases go beyond releasing phosphorus: they also have a significant role in reducing the negative impact of inorganic phosphorous excretion to the environment. The excess amount of phosphorous in phytate is often excreted in manure, which is a source of environmental pollution. Ultimately, phytases represent a win-win situation for both nutritional and environmental phosphorus-related issues, which motivated the development of an array of different enzymatic options that enhance the nutritive value of plant-based animal feeds.

An ideal phytase should be active in the low-pH environment of the stomach to begin phytate hydrolysis as soon as possible. It should also resist high temperatures during the pelleting process, and should have a high specific activity at physiological temperatures. The commercial phytases currently available perform differently in the laboratory, and thus have different benefits on animal performance. The currently marketed enzyme with the highest bioefficacy and activity at low pH is a Buttiauxella phytase that acts twice as fast as its direct competitors to ensure that most of the phytate is hydrolysed in the early stages of digestion, performed in gut sections where pH is considerably lower than in subsequent sections. Enzymes with a superior pH profile will thus hydrolyse phytate in the upper part of the digestive tract, as quickly as possible to effectively reduce the antinutritional effect of phytate. Pelleting, a process widely used in feed production where high temperature and pressure are used, also impairs the stability of added feed enzymes and creates a major concern for feed manufacturers. However, the phytase market continues to develop and test novel enzymes and formulations in an effort to find new, better-fitted enzymes that deal with the challenges faced during feed production and are tailored for swine optimal nutrition.

Better does not have to be the enemy of good

The above mentioned high bioefficacious phytase was further improved into the new Axtra® PHY GOLD. Its performance in vitro followed by in vivo trials validated how it excels at replacing phosphate supplementation in animal feeds and also, for example, improving growth and digestive performance in pigs.

Phytate in vitro trials were run with five different phytases and assessed enzymatic performance over a range of pH, phosphorus release, and harsh pelleting conditions. Widening the enzyme's pH ranges ensures a better performance in very acidic environments such as the upper digestive tract, thus ensuring a faster phosphorus release into the digestive system. The recently developed phytase showed a superior pH profile when compared to competitors (Figure 1), as well as higher thermostability when exposed to high pelleting temperatures, which is vital to avoid a reduction in the amount of available enzyme introduced in feed formulation. Superior phosphorus release results were also recorded when compared to four phytases currently available in the market. 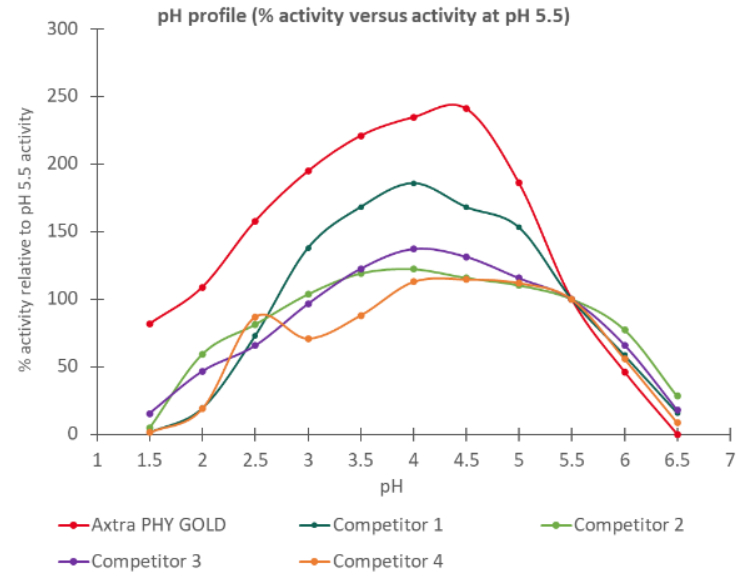 In vivo studies in sows and piglets fed a corn-based diet showed that the new phytase enzyme can completely replace all inorganic phosphorus supplementation in piglet diets while maintaining FCR and growth performance levels, as compared to the positive control group. Piglet's final body weight was also higher with the new enzyme, as validated in a trial where the phytases were supplemented at 250, 500 or 1,000 FTU/kg[1] (Figure 2). 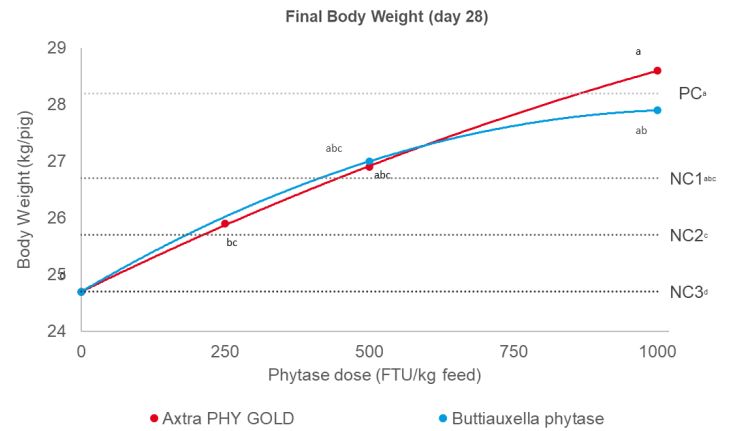 Figure 2 – Effect of increasing phytase doses from 0 to 1,000 FTU/kg on the final body weight of piglets.

Phosphorus digestibility is a key indicator of how successful a phytase is in making phosphorus availabile to the animal. In a trial where sows were fed diets supplemented with phytase at 500 FTU/kg, the new phytase registered a significant improved total tract phosphorus digestibility by 9.6% compared to Buttiauxella phytase. The recently developed phytase thus shows a high phosphorus release rate, which makes it available for absorption during the digestive process.

A new phytase with a handful of golden opportunities

Given its superior bioefficacy compared to other phytases, Axtra® PHY GOLD further elevated the highest place on the phytase podium. The new product displayed superior thermostability, enabled total removal of inorganic phosphate from plant-based diets, improved swine performance, and resulted in a better environmental footprint. It also proved to be especially important for pre-mixers that have no control over their final customer's pelleting conditions. Because even great enzyme performers can still be improved and have their abilities maximised, enzyme tailoring remains a field worth continuing to explore.