Vinh Hoan signs agreement with PHARMAQ on vaccination of pangasius

PHARMAQ, a Zoetis company, has entered into a partnership agreement with Vietnam's leading pangasius producer Vinh Hoan Corp., which involves large-scale vaccination of pangasius with ALPHA JECT Panga 2, a PHARMAQ vaccine that protects against disease caused by the bacteria Edwardsiella Ictaluri and Aeromonas Hydrophila.

"PHARMAQ has been present in Vietnam for more than ten years, and we see this agreement as an important milestone for the introduction of fish vaccines in Asian aquaculture," said Morten Nordstad, president of PHARMAQ, who signed the agreement with Mrs. Truong Thi Le Khanh, chairwoman of Vinh Hoan, at the VIETFISH Exhibition in Ho Chi Minh City held on Aug. 22-24.

Nordstad explained that vaccines "are important tools for prevention of fish disease, and they help increase the sustainability of fish farming".

Vinh Hoan said the large-scale adoption of vaccines is a major milestone for the Vietnamese pangasius industry, adding that the use of efficacious vaccines can reduce or replace the use of antibiotics in the treatment of disease.

"Our goal is to offer healthy and safe food without environmental and economic trade-offs, and the use of vaccines is essential to reach this objective", said Ms Vi Tam, CEO of Vinh Hoan.

PHARMAQ, which is based in Norway, is the global leader in vaccines and innovation for aquaculture and part of US firm Zoetis, the world leader in animal health. 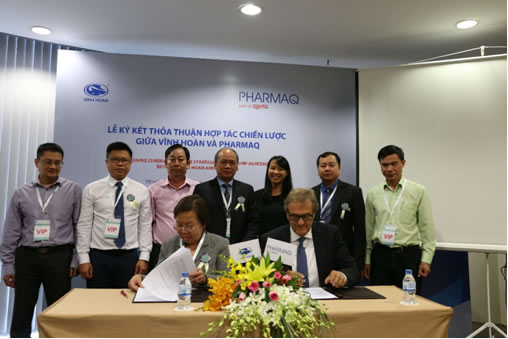 Mrs. Khanh Truong, chairwoman of Vinh Hoan Corp., and Mr. Morten Nordstad,
president of PHARMAQ sign the partnership agreement.   VINH HOAN PHOTO
Video >
Technical Paper >
Main causes of changes in liver coloration in poultry
In many poultry markets around the world where chicken viscera are commonly sold in supermarkets, the appearance of the liver is very important for marketing purposes. Customers ha ...
Fungisorb - complex sorbent neutralizer of toxins
To prevent the development of mycotoxicosis in animals, it is advisable to use mycotoxin binders. Russian manufacturer "Sibbiopharm" Ltd. offers a complex mineral-organic mycotoxin ...
Leaky gut and mycotoxins aflatoxin B1 does not increase gut permeability in broiler chickens
Previous studies conducted in our laboratory have demonstrated that intestinal barrier function can be adversely affected by diet ingredients or feed restriction, resulting in incr ...