Pork exports to China grew 6% or 2,700 tonnes in June, following months of decline, and exports to Japan picked up,too, by 14% or 3,800 tonnes compared with a year earlier.

Japan is a premium market, and average export prices to this country are typically over twice those in China.

EU exports to South Korea also grew, by 3% or 600 tonnes, and rising volumes to a number of smaller markets (including Ukraine, Vietnam and Angola) supported the overall performance as well.

June exportsto the US, however, fell year-on-yearby 1,100 tonnes, as well as tothe Philippines by 1,500 tonnes and Hong Kong by 3,300 tonnes. Deliveries to the Ivory Coast, while a much smaller market, also declined by 1,400 tonnes compared with June 2017.

In the first half of the year, EU fresh and frozen pork exports were broadly stable on the year at just over 1 million tonnes. Exports to China and Hong Kong combined were 10% lower in the six months through June, at 376,000 tonnes.

However, EU exporters were relatively successful in expanding markets in Japan, South Korea and the US. Global conditions weighed on prices, and the value of EU pork exports in the first halffell 8% year-on-year.

Offal exports in the first half fell slightly by 4%to 610,000 tonnes. Again, prices have been lower, together contributing to a 19% fall in overall value at €707 million. The decline in volume terms was almost entirely driven by falling shipments to Hong Kong.

China remained the most important destination with its share of EU exports increasing to 57%, as direct trade increased 4% year-on-year between January and June.

Exports to Japan also fell almost 50% (-9,200 tonnes) in the first half. Japan has been turning to North America for its offal supplies in recent months in what is a very price sensitive market.

The pork division of the UK levy body Agriculture & Horticulture Development Board noted that the EU has been finding a home for exports in growing markets like West Africa, South Korea and the Philippines. 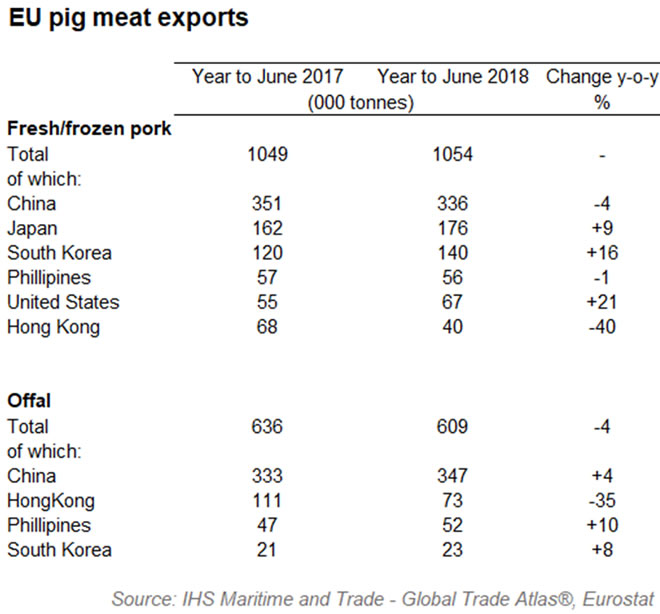