As described in Part I and Part II, good gut status starts from a clean and safe feed that is well controlled for microbial and oxidative deterioration, including inhibition of mould growth during storage, elimination of pathogens such as Salmonella in feed and water, prevention of oxidative deterioration in fat-rich raw materials and feeds, alleviation of mycotoxin contamination risks, especially those harmful to gut functions – T-2 toxin and deoxynivalenol, throughout the feed production cycle. In addition, a well-balanced feed between digestible and indigestible nutrients could help animals improve gut status by positively influencing the microbiota thanks to the probiotic and prebiotic effect from exo-enzymes: shifting the microbiota population towards beneficial bacteria, decreasing intestinal inflammation, and increasing the short chain fatty acid produced in the cecum, mainly the acetic and butyric acids in the digesta.

With the good foundation mentioned above, gut health could be further supported by various other feed additives, such as probiotics, precision-delivered butyrate, phytogenics, and essential oils, etc. Nowadays, with the progress of post-AGP era and more severe disease challenges, applying nutritional strategies that promote a healthier gut and enhanced immune status is of utmost importance, on top of good farm management practices.

In this article as step 3 of Adisseo holistic gut health program, we will explain how to further sustain animal resilience by acting on the three lines of defense: more beneficial microbiota, strengthened mucosal barrier function and reduced intestinal inflammation, which in turn result in a better animal performance and profitability for the producers.

We have demonstrated in Part II, a good multi-enzyme complex, such as Rovabio Advance, could significantly change microbiota composition in the cecum favoring beneficial bacteria. On the other hand, a good probiotic, with proven activity in the gut after germination, could also influence bacteria population via production of various metabolites.

Alterion®, a unique Bacillus subtilis probiotic from Adisseo, is the only probiotic available in the market where germination has been demonstrated and visualized inside birds. To verify the germination at in vivo conditions, broiler chicks were either fed a control or a treatment diet to which dual-labelled Alterion® reporter spores were added. Samples of the ileal contents were analyzed and processed via InCell Analyzer to check fluorescence. The predominant red colour in the Alterion® group indicates that most spores have germinated (Figure 1). 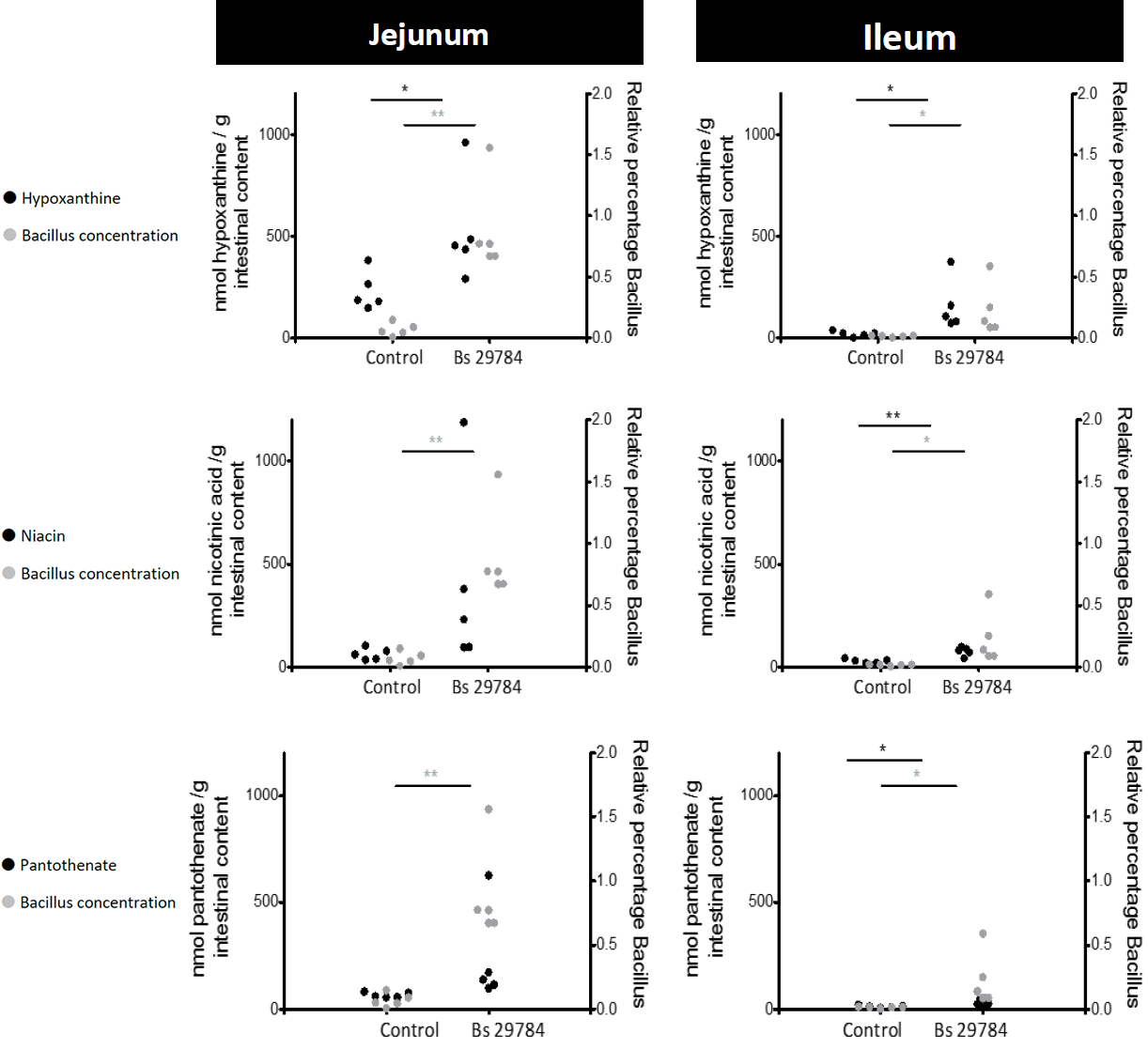 Further in a 42-day broiler trial at Southern Poultry Research, Inc (Athens, GA, USA) in collaboration with Dr Greg F. Mathis., at the cecal level (Figure 3), five genera (out of 116) were observed at a significantly higher relative abundance in Alterion® treatment group, mainly from the Firmicutes phylum including Ruminococcus. These bacteria are known to breakdown polysaccharides to oligosaccharides, assisting the digestion of cereals and vegetable proteins in poultry diets.

Figure 3:  Effect of Alterion® on the abundance of different taxonomic groups of the gut microbiota - from cecal samples of 42-day-old broilers 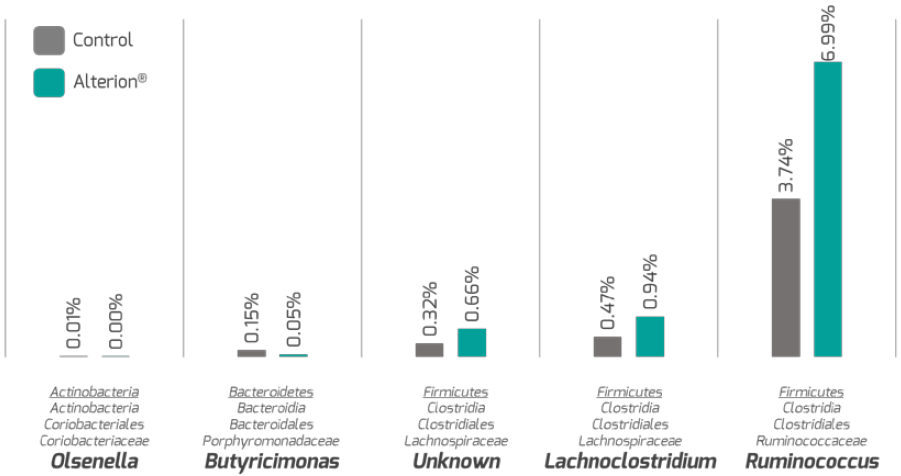 In addition, increased relative abundance of Lachnoclostridium was also observed. These bacteria degrade oligosaccharides and produce short chain fatty acids (SCFAs) – butyrate. It is well known that as a very important microbial metabolite, butyrate represents the main source of energy for enterocytes, cells from gut wall, and a very potent anti-inflammatory compound at the same time. Of special importance, when butyrate is precisely delivered in the hint gut, it can trigger the secretion of antimicrobial Host Defense Peptides (HDP's) to decrease inflammation and down regulate Salmonella Pathogenicity Island 1 (SPI1) genes, which are needed for host colonization and invasion.

Therefore, when reducing Salmonella load in the final animal products is a concern, on top of Salmonella inhibiting products such as Salmo-Nil® and Evacide® S liquid that work directly in the feed and drinking water, Adimix® Precision, is another important pillar to complete the program by increasing butyrate concentrations in the upper-, mid- and especially in the hind gut. Compared to other butyrate products, its superior performance was proven by Salmonella infection experiments in poultry (van Immerseel et al. 2005; Onrust et al. 2020) and in swine (Walia et al. 2016; Lynch et al. 2017), thanks to its precision delivery technology.

The integrity and robustness of the intestinal barrier is essential for efficient nutrients absorption, innate immune system stimulation and prevention of pathogens and toxins from entering the blood stream, therefore contributing to the optimal bird health and performance.

In the same study reported above, significantly longer intestinal microvilli (+18% increased length in the ileum and +17% in the cecum) was also observed in Alterion® fed group, suggesting its positive impact on gut morphology. In addition, direct influence of Alterion® on the intestinal barrier integrity was demonstrated by an in vitro model (Caco-2 monolayer cells in Transwell System) and trans-epithelial electrical resistance (TEER, voltage between the apical and basolateral side) measurements. The higher the TEER, the better the integrity. When a pro-inflammatory cytokine (TNF-α) was introduced, as expected, TEER decreased and D-Mannitol flux increased, suggesting the integrity of the barrier was compromised. Alterion® was able to restore both parameters to levels similar to non-stimulated cells (Figure 4). Further in vitro evidence explained the improvement in TEER by Alterion®, by the increased expression of tight junction proteins – ZO-1, claudin-1 and occluding (Rhayat et al., 2017).

Inflammatory responses cause a significant amount of energy, which would otherwise be used for growth. As the industry is moving away from AGPs due to concerns over antibiotics resistance, alternative solutions need to be proposed and anti-inflammatory property is one of the key evaluation requirements.

The same in vitro model (the Caco-2 cells) can be used to compare direct anti-inflammation effect from commercial probiotic products, benchmarked by epigallocatechin gallate (EGCG) known as a strong anti-inflammatory compound. By exposing the Caco-2 cells to interleukin 1 beta (IL-1 beta), the mycotoxin deoxynivalenol (DON) and flagellin (Fla), production of interleukin 8 (IL-8) was measured as a marker of acute inflammation.

Interestingly, Bs A and Bs B exaggerated the effect of DON on IL-8 production, implying an even worse damage to the gut from DON. Whereas, Alterion® (Bs 29784) successfully reduced IL-8 production compared to DON-treated control and other inflammatory conditions (Figure 5). All these results further illustrated the uniqueness of Bacillus strain in Alterion®.

Further research unveiled the mechanism of Alterion® in the inflammation control pathway – through inhibition of IkB degradation, thus preventing NF-κB translocation, and subsequently controlling the expression of pro-inflammatory compounds such as IL-8 and iNOS enzyme (Rhayat et al. 2019).

Figure 5.  Effect of Alterion® (Bs 29784) and other commercial probiotic strains (Bs A and Bs B) on IL-8 release in standard and challenging conditions 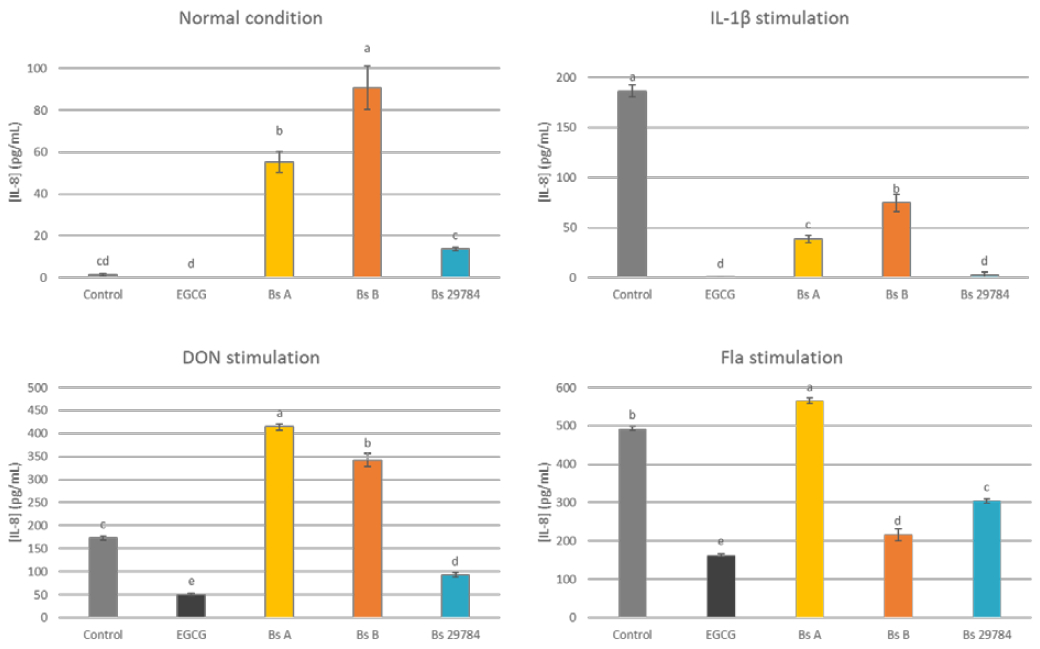 We have reviewed all key nutritional strategies in Adisseo's 3-step holistic gut health management program – clean and safe feed, with improved overall digestibility via PNE service and exogenous enzymes, and combinations of unique probiotic and precision-delivered butyrate that sustain animal resilience at farm level from the three lines of defence.

Along the journey, we are confident that such holistic approach will ultimately bring more profits to producers: e.g. feed cost saving from precision formulation, safer meat/egg products that meet more stringent export requirements, healthier chicken feet for those who love to eat, cleaner eggs that could support transition to cage-free production and demand from fast food services and consumers who care about animal welfare, AGP-free or no-antibiotic-ever chickens that answer consumers' concern over antibiotic resistance, etc. With implementation of all these nutritional strategies together with good management practices, the animal production industry will embrace a more profitable and sustainable future.

Video >
Technical Paper >
Reinforcing calves immunity and improving gut microbiota balance to safeguard health and performance
The digestive tract of calves, as other young ruminants, is particularly sensitive to challenges. Indeed, during the first months of life, their digestive tract undergoes significa ...
Weaning management of beef calves with implications for animal health and welfare
Weaning is a necessary husbandry practice in which nutritional, social, physical and psychological stressors are imposed on the beef calf causing alterations in behavioural and phy ...
Current challenges in young animal nutrition
The nutrition of young animals is essential. Why? At this stage of life, they are very susceptible. Their gut health, robustness, and resilience are still immature, going together ...