Although the USDA boosted its estimated corn crop yield to a record high 167.5 bushels/acre it surprised everyone with its new-found conservatism. With the upward revision in yields, this year's record harvest size was upped 1.2% from the previous 352.1 million tonnes to 356.4 million tonnes. 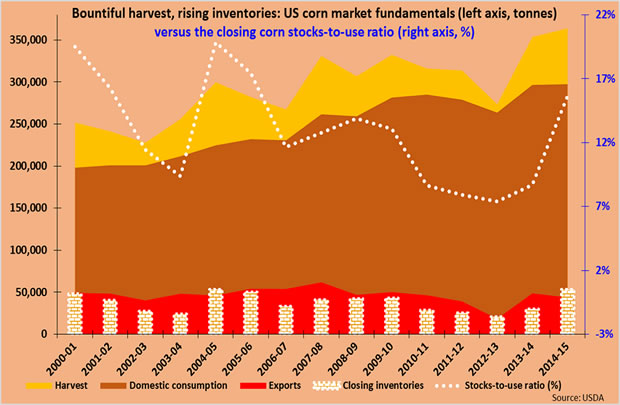 Partly due to this low-balling of USDA corn yield estimates, partly due to political tension in leading exporter Ukraine, corn staged a strong, but short-lived recovery. After the release of August's WASDE report, CBOT corn quickly zoomed from slightly over US$3.50/bushel to US$3.78/bushel within days, before slumping back to slightly over US$3.60/bushel.
Alongside the unexpectedly low USDA corn yield estimate, more credible numbers also boosted market confidence. With wheat currently trading at a 40% to 50% price premium to corn, there is very little scope for additional feed wheat substitution in place of the latter.
In addition, cheaper corn made both ethanol and livestock production more profitable, thereby stimulating their respective expansions. The USDA's reflected this reality, boosting its corn feed demand up by 1.27 million tonnes and both its corn export and ethanol demand numbers by 0.64 million tonnes each respectively. In a late August Farm Radio Journal interview, Gulke Group founder Gerry Gulke noted that with corn selling at its lowest level since 2010, "We're going to be feeding more animals, we may be exporting just as much, and we're going to be making more ethanol."
Moreover, after trimming its 2014-15 opening inventory estimate by 1.65 million tonnes, closing 2014-15 inventories of 45.9 million tonnes were practically unchanged from the previous month's 45.8 million tonnes. With many forecasters expecting closing stocks to exceed 50 million tonnes, it had the effect of stabilising the market.
Deflationary pressure building up
But corn's late summer firmness may be temporary at best. Germany's Commerzbank reflected the market consensus, stating that, "many observers therefore expect the US department of agriculture to upwardly revise its yield estimates for the US corn and soybean crops again."
Nevertheless, barring a catastrophic weather event, Gulke believes it is a matter of time before the harvest's supply increase overtakes rising livestock and ethanol making demand. He expects that by the late third quarter, it will be obvious that, "We're going to have a big solid crop; there will be plenty of corn to go around for everybody."
Similarly, after touring Midwestern corn fields, Australia's Macquarie bank observed dry weather in northern parts of the Midwest like Minnesota only partly offsetting "unbelievably good" yields in major eastern corn belt states such as Illinois and Indiana.
At 170.3bushels/acre and an implied 362.4 million tonne harvest, Macquarie's yield estimate is one of the more conservative private forecasts. By comparison, using current USDA estimates of corn planted area, Lanworth's estimate of 174.8bushels/acre and implied 371.9 million tonne harvest represented the average of private forecasts, which ranged as high as 180 bushels/acre.
At the time of this article's publication, ongoing good weather and crop reports implied that corn yields would average around 175bushels/acre. Against the bearish implications of this abundant harvest, there is only one supply tightening factor: Hail storms in eastern Nebraska, Iowa and western Minnesota appear to have irreparably damaged some farm fields, forcing some farmers to abandon this year's crop.
This could reduce corn planted area below USDA estimates, though not enough to materially impact either the final crop or the market trend. According to Macquarie, data from America's Farm Service Agency (which tracks farm insurance payouts and fields abandoned due to crop losses) implies that only 90.5 million acres of corn remains planted, from the USDA's estimated 91.625 million acres. US Commodities is even more conservative, estimating that the remaining corn planted acreage totals 90.1 million acres.
If we take US Commodities more conservative corn acreage estimate and multiply it by an average, market consensus crop yield of 175 bushels/acre, we get a corn harvest of approximately 364 million tonnes. This is not as high as the 372 million tonnes implied by combining average private sector crop yield estimates with the USDA's official acreage numbers. Even so, with exports falling from 48.8 million tonnes last year to 43.8 million tonnes this year, the bearish trend does not lose any momentum.
Such a harvest would push closing 2014-15 inventories from the estimated 45.9 million tonnes to approximately 53.5 million tonnes, well over the market critical 50 million tonne threshold. 2014-15's corn stocks-to-use ratio would also rise, from the current USDA estimate of 13.5% to 15.7%. This is a serious market shift from 2012-13, when the stocks to use ratio closed at 7.4%, or from 2013-14, when it was 8.7%
Furthermore, barring unexpected weather events, the harvest, inventories and stocks-to-use ratio could all come in above these estimates.
Even the USDA's more conservative forecast leaves world corn inventories up 36% in two years, from 138 million tonnes in 2012-13 to 188 million tonnes in 2014-15. Hence, barring any unexpected weather event or geopolitical upsets in Ukraine, corn appears headed towards US$3.50/bushel.