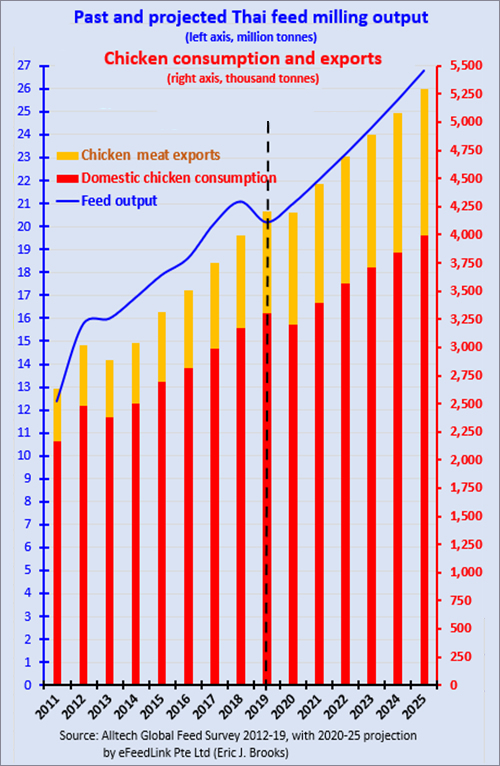 Most Southeast nations are nominally self-sufficient in meat but heavily dependent on imports of financial capital and technology. But even here, ASEAN is lucky: Neighboring Thailand's technologically advanced, highly integrated feed sector is well capitalized and experienced growing meat in Southeast Asia's unique conditions. Maure and advanced as they may be, Thai feed mills are export-driven enough to keep expanding output just as rapidly as their less-developed Southeast Asian neighbors
In global agribusiness, Thailand stands out by exporting feed mill financing and technology with the same aplomb it supplies world meat, seafood, and dairy products. Third-ranked in broiler meat exports after Brazil and America, Thailand will supply up to a million tonnes of frozen and processed chicken this year. It is also the world's fifth-largest seafood exporter, a leading exporter of pet foods, and an important supplier of dairy products to neighboring ASEAN nations.
Thailand mass imported feed milling, livestock farming, and meat processing technology decades before other ASEAN nations did. Over time, it developed a strong in-house understanding of the processes technologies behind feed milling, animal farm productivity, and meat processing.
While multinationals like America's Cargill and China's New Hope Group have milling and crushing facilities, Thai feed milling is highly integrated and enjoys a high level of domestic ownership. Homegrown conglomerates like CP and Betagro long outgrew Thailand's relatively mature market. They control a rising number of vertically integrated feed milling, animal farming, and meat processing facilities throughout Southeast Asia and China, more recently expanding into India and Eastern Europe
In 2019, its export-powered broiler sector accounted for 46% of feed output (9.25 million tonnes), followed by its large but domestically oriented swine (28%, 5.6 million tonnes) and layer sectors (16%, 3.2 million). Its export-oriented pet food and dairy sectors each account for a million tonnes of output and 5% of output respectively.
After the EU and Japan lifted an eight-year ban on its frozen chicken in the early 2010s, feed production enjoyed an export-driven boom. Led by rising broiler production, feed milling expanded 7.9% annually from 2011 through 2018, with output rising from 12.4 million to 21.1 million tonnes. With swine accounting for a large proportion of protein production, ASF caused feed output to fall 5% to 20 million tonnes in 2019.
Going forward, Thailand faces challenges but is also promised both a bright future and an important role. No one knows how quickly its swine sector will recover from ASF, but hogs have the greatest scope for consolidation and productivity improvement of any Thai protein line.
While fully recovered from last decade's bird flu woes, it has failed to bring EMS, EHP, and other chronic shrimp diseases under control for eight years. While its exports of whitefish, tuna, and other crustaceans continue to flourish, it badly would like to re-ignite its shrimp sector, which once led the world in exports.
On the other hand, Thai owned feed mills in neighboring ASEAN nations successfully manage integrated shrimp, pork, and poultry raising facilities in these nations. These are flourishing as much as its chicken meat exports to Japan and Europe.
Once COVID-19 passes, its domestic meat lines' 2.5% longterm expansion will be complemented by export demand rising two to three times faster. This should allow Thai feed output to expand 5% annually, reaching 25.6 million tonnes by 2025 – roughly equal to the volume of feed that will be produced by Vietnam and Indonesia by that time.
In conclusion, once the economic damage from ASF and COVID-19 passes, the fast growth and dynamic potential of Southeast Asian agribusiness will be increasingly actualized by deep-pocketed Thai agribusiness. From Indonesia to the Philippines, Cambodia to Myanmar, Southeast Asia's growing food abundance will owe much to Made-in-Thailand agribusiness financing, technology, and farm management techniques.