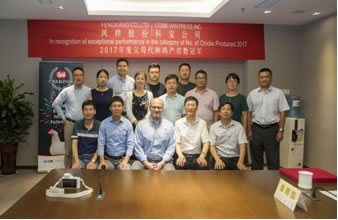 "This performance could not have happened if we did not have quality parent stock supply from Cobb China. I would like to thank our breeder and hatchery teams for their outstanding work flock after flock," Wang said.

"It takes attention to detail to make everything right to achieve this exceptional performance. The two companies are setting new standards for our industry in China and beyond and I congratulate them for a job well done."