ABSTRACT - The objective of this study was to evaluate a growth model applied to adjust nutritional programs for growing and finishing pigs, in a commercial production context. The phase I (calibration) was conducted in a commercial pig production unit. The data were collected from a nutritional program, a feed program, and an animal profile. In experimental phase II, these data were entered in the InraPorc® model for simulations and to propose adjustments to the commercial nutritional program. Afterwards, the conventional nutritional program (CNP) and the adjusted nutritional program (ANP) were compared with InraPorc® simulation. Animal profile was collected by weighing 30% of pigs per stall and monitoring their feed intake in each stage. Four hundred and thirty-two pigs with an average initial body weight of 21.9 kg were used in a completely randomized design. There were no differences between treatments, the pig performance was affected by temperature conditions, and the fat thickness was 8% higher for CNP than ANP. In conclusion, the model has advantages to adjust growing and finishing pig nutrition programs and improve environmental and economic aspects.

Precision nutrition is a relevant concept in livestock production that uses different tools and management processes aiming to reduce losses, increase the product quality (Nääs, 2011; Pomar et al., 2009), reduce uncertainties in decisions, and optimize available resources (Mollo et al., 2009). The dynamic use of nutrients and the animal response in different production scenarios require a nutrient supply according to the diversity and purposes of production systems, aiming to improve efficiency (Pomar et al., 2009).

The definition of pig nutritional programs in commercial production is guided by recommendations, in which differences between production systems consider a generic form (Rostagno et al., 2005; Rostagno et al., 2011), generating situations of over- or undernutrition. The objective of this study was to evaluate a growth model applied to adjust nutritional programs for growing and finishing pigs, in a commercial production context.

This study was conducted in accordance with ethical standards, in a commercial production unit in two experimental phases.

During the phase I, from November 2011 to January 2012, the data were collected to calibrate the InraPorc® model to estimate the nutritional requirements. The pigs were a mixed group of 432 animals (barrows and gilts), from an industrial crossbreeding between AGPIC 337 males and Camborough 25 females from Agroceres PIC. Pigs were housed in a conventional shed with 16 stalls and 27 animals each, receiving water and feed ad libitum, using commercial company nutritional programs and nutritional composition calculated according to food composition tables (CNP) of Rostagno et al. (2011). The collected data were production data [age (days), feed intake (kg), and body weight (kg)] from a sampling of 30% of animals per stall. Pigs and feed were weighted at the end of each phase and daily gain, feed intake, feed conversion, and daily gain were calculated. Also, average, maximum, and minimum daily temperatures were registered.

In the experimental phase II, between March and June of 2012, we compared two nutritional programs: the conventional commercial nutrition program (CNP) and the adjusted nutritional program using the InraPorc® model (ANP), applying the animal profile from experimental phase I (Table 1). The 432 animals were a mixed group (barrows and gilts) with the same crossbreeding used in phase I. The pigs received water and feed ad libitum. Production data [age (days), feed intake (kg), and body weight (kg)] were collected from a sampling of 30% of animals per stall. Pigs and feed were weighted at the end of each phase to calculate daily gain, feed intake, feed conversion, and daily gain. Average, maximum, and minimum temperatures were registered daily. 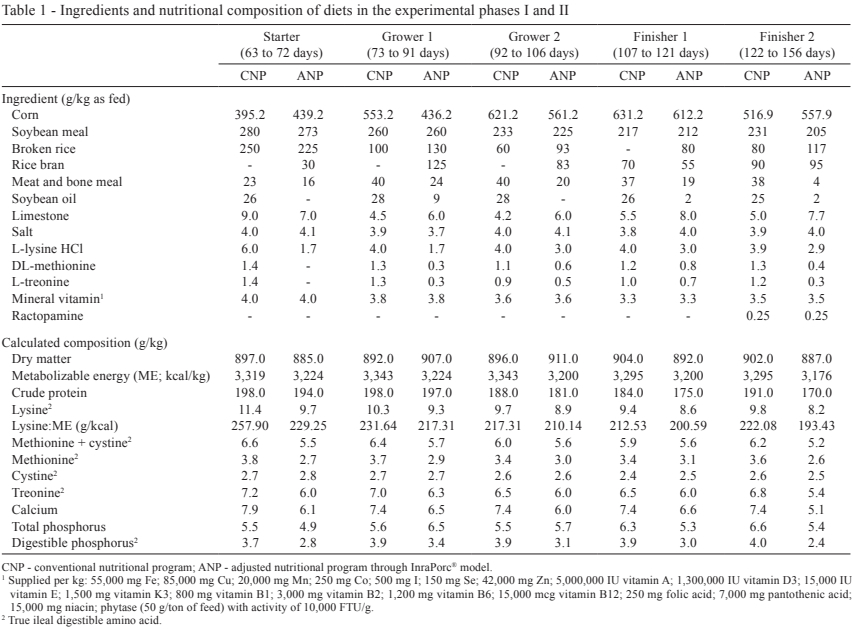 At the end of the experimental phases I and II, the animals were fasted for 10 h before being transported. Eight pigs were selected randomly per pen before the transport and identified for carcass evaluations. The animals were stunned electrically and bled. After slaughter and evisceration, the hot carcass weight was obtained and the carcass was cooled at 2 °C for 24 h, to obtain cold carcass weight. After this period, carcasses were weighed again to obtain cold carcass weight. Carcass length was measured on left half carcass, from the cranial edge of the pubis symphysis to the cranioventral edge of the atlas. The fat thickness was measured, in the same half carcass, perpendicular to the midline at the last rib. Carcass dressing percentage was estimated by the following equation: CY (%) = [(CCW/BWf) × 100], in which CY = carcass yield, CCW = cold carcass weight (kg), and BWf = final body weight (kg).

The statistical procedure was the MIXED model of SAS (Statistical Analysis System, version 9.0) with fixed effects of nutritional programs and feeding stages (except for carcass traits). A structure selection test was conducted using Bayesian information criterion to determine the best model. Whenever differences were observed, means between nutritional programs and feeding stages were compared using the LSMEANS procedure. Nutritional program × feeding stage interaction was decomposed when significant at the 5% probability level. The estimated values of pig performance obtained by the model were compared with the observed means to evaluate the model accuracy and predict the performance with the t test at the 5% probability level, in which insignificant differences represented adequate model accuracy.

No differences were found (P>0.05) (Table 2) among treatments for the performance variables.

Different temperatures were observed during the experimental phases I and II, which can have influence on the performance of CNP and ANP (Table 3).

The pig performances were similar between the models ANP and CNP (Table 4); however, the model had an adequate accuracy to estimate average body weight in growth stage 1 (grower 1) (P>0.05). 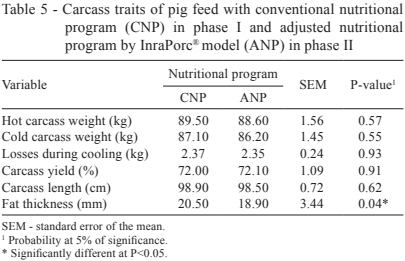 The nutritional programs did not influence (P>0.05) the carcass analysis, except for the fat thickness of the pigs fed ANP, which was 1.6 mm lower (P<0.05) as compared with treatment CNP (Table 5).

No differences between treatments agree with other researchers who used the InraPorc® model as a tool to adjust nutritional programs (Quiniou et al., 2009; Rossi et al., 2013).

Differences between the observed values and the values estimated by the model for body weight and body weight gain is explained by the fact that average daily feed intake has significant differences in finisher 1 and finisher 2 stages (P<0.01). The variation in feed intake can be attributed to the different environmental conditions between the experimental phases I and II. High environmental temperatures reduce voluntary feed intake in pigs during heat stress (Quiniou et al., 2001; Huynh et al., 2005; Kiefer et al., 2010; Batista et al., 2011) because the intake mechanisms are regulated for the short and long-term processes, which influence the partition of energy between maintenance and deposition (Hauschild et al., 2010; Batista et al., 2011; Hauschild et al., 2012; Rossi et al., 2013; Warpechowski et al., 2014). The InraPorc® deterministic model characterizes the pig in thermal comfort, in heat stress, or under other factors that influence the voluntary feed intake (Van Milgen et al., 2008; Hauschild et al., 2012; Rossi et al., 2013), but does not consider environmental effects directly. However, if the animal profile is adjusted in specific climatic conditions, its requirements and the nutritional adjustment are more accurate.

The use of a precision tool, such as the InraPorc® model, can alter the feed formulation, improving environmental and economic aspects. Further studies related to the response of pigs to temperature, in similar production systems to this study, are needed to improve the ability and accuracy of growth models. This requires establishing a methodology to enter the animal profile information to be used in the parameterization of the growth model in studied situations.

Article made possible through the contribution of D. Klein et al.