In an ideal world, a laying hen produces an egg a day per housed hen across the entire laying cycle. But with commercial production pressures, this can prove impossible, so we try to get as close as possible to achieving that performance. However, there are many variables which stand in the way of achieving it. Apart from the fact that even high-producing hens may skip a day periodically, older hens produce less with certain stressors impacting overall production. Disease status, heat stress and negative nutritional interactions can all affect egg production performance.  Suboptimal conditions not only impact egg numbers, but egg quality as well, with an increase in the number of cracked eggs or second grade eggs negatively affecting overall farm profitability.

There are many ways that trace minerals have an interaction with the quality of eggshells. Zinc, copper, and manganese are the three most important trace minerals, as they have both catalytic and structural properties. Zinc catalyses carbonic anhydrase, which is needed to deposit calcium carbonate in the shell matrix, Copper is required for the synthesis of collagen found in eggshell membranes and manganese helps to deposit proteins in the eggshell matrix. Supplementation of these trace minerals can improve eggshell breaking strength and decrease the percentage of broken eggs. The bird also needs more trace mineral to support immune function when there is high disease pressure, placing its immune system under pressure.  It is important to consider that the trace mineral requirements of a bird changes over time. Laying hens need more support at certain stressful periods in the laying cycle, especially during early lay until peak production and again in late lay. In early lay the bird has to adjust to producing a larger number of eggs, sometimes resulting in worse eggshell quality. In late lay the egg number is reduced and again, egg quality may drop. This happens for a number of different reasons, such as declining gut health and ability to absorb nutrients, as well as the fact that the birds need to mobilize calcium from the bone to form eggs. Research shows that with the aging hen, as egg size increases, eggshell thickness and mass can decrease by around 10%, resulting in more cracked eggs.

Adapting to the changing needs

In modern-day production it is essential to supplement trace minerals in feed in order to meet the birds’ requirements. This is why Trouw Nutrition has carried out extensive trial work focusing on the chemistry of trace mineral sources. They highlight the importance of helping the bird as efficiently as possible, supplementing trace minerals to match the birds requirement, thereby optimising input, to prevent excess output in faeces which can be harmful to the environment. It’s important to avoid undersupply, which can occur during a ‘stressful event’ such as the onset of lay, or a disease challenge when there will be an increase in the trace mineral requirement. However, oversupply can lead to toxicity and environmental waste, showing the need to optimise supply.

In daily practice, many producers utilise cheaper, more commoditised trace mineral sources, such as sulphates and oxides. However, these sources are extremely reactive in feed and can have a negative impact on feed quality, offering minimal bio-availability. Alternative sources such as Hydroxy trace minerals are absorbed most efficiently compared to the common inorganic sources such as sulphates, which can easily solubilse in the feed and the GIT, binding to dietary antagonists, rendering them unavailable for absorption in the small intestine. These insoluble complexes are excreted in the faeces resulting in wasted product, as well as higher excretion into the environment. A superior source of zinc, copper and manganese can further improve egg production and reduce the number of cracked eggs (Fig 1, Fig 2). A highly bio-available trace mineral source can also mitigate the effects of heat stress on performance, for example, in Fig. 3 and 4, a regression analysis was carried out on egg production and temperature with both Hydroxy Trace mineral source IntelliBond, and inorganic sulphates. It was found that as temperature increased, overall egg production reduced, however this correlation was much weaker with IntelliBond, compared to the inorganic sulphate – indicting that IntelliBond can help mitigate the negative impact on laying performance of heat stress. The key is to utilise an improved trace mineral source to improve bio-availability, thereby optimising trace mineral levels in feed to match the birds’ requirements. This level may increase in times of stress throughout the production cycle but has a clear economic upside when the performance benefits of switching sources are taken into account. 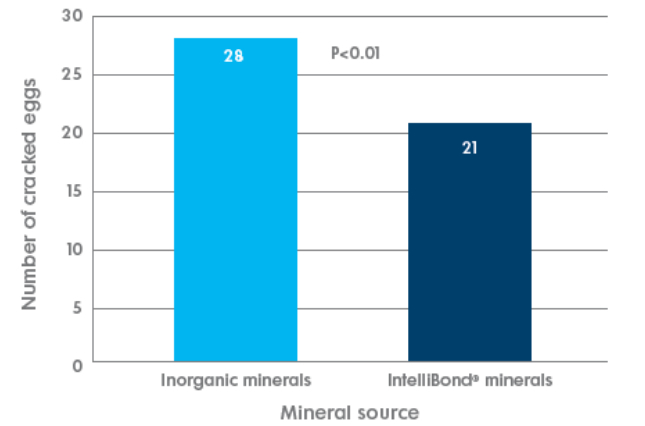