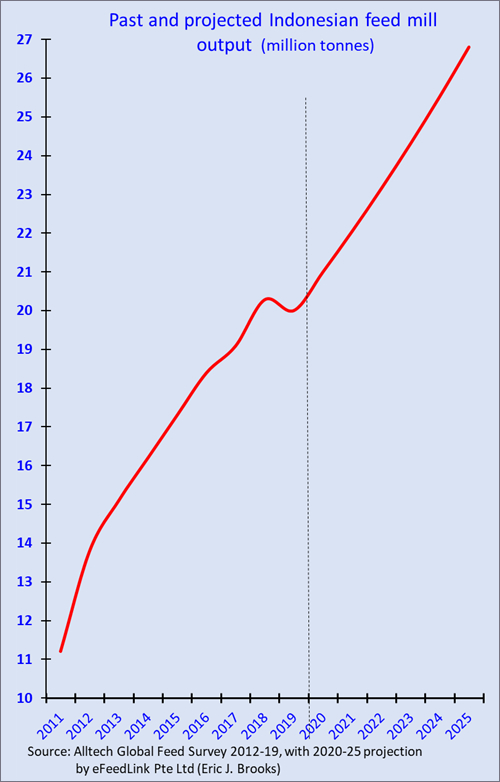 Containing 40% of ASEAN's population, Indonesia has nearly three times more people than Vietnam but producing almost the same volume of feed (20 million tonnes in 2019). With its 84 mills producing the same volume of feed as Vietnam 221, Indonesia's feed sector is more advanced in its consolidation.
With a  280 million population, it is the largest of Southeast Asia's underdeveloped, fast-growing markets. From 2011 through 2018, output expanded 7.8% annually from 12.4 million tonnes in that year to over 20.3 million tonnes.
Indonesia has 10kg of per capita meat consumption of which 8kg is poultry, compared to over 30kg in Vietnam, Thailand and Philippines, 47kg in Malaysia, or 62kg in Singapore. This, however, is partly offset by Indonesia's 33kg per capita seafood consumption, of which a rising proportion (11kg) comes from aquaculture. The low level of meat consumption and Indonesia's large population does ensure that both this country and Southeast Asia have decades of rapid feed and livestock growth ahead of them.
Based on Alltech Global Feed Survey data, from 2011 through 2018 inclusive, Indonesian feed output expanded at a 7.8% rate. The  proportion of feed accounted for by poultry has fallen from over 80% in the late 2000s to around 68% today. This is due to the exceptionally rapid growth of its aquaculture and dairy sectors.
With a US$3,900 per capita GDP, feed production is mostly accounted for by broilers (35.5%, 7.1 million tonnes) and layers (32%, 6.4 million). Aquaculture (9.5%. 1.9 million), swine (12%, 2.4 million) dairy (8.5%, 1.7 million) and beef cattle (2.5%, 0.5 million) account for most of the rest.
On the other hand, with per capita pork consumption at 1kg (and mostly done by tourists or Indonesia's Chinese community), Indonesian agribusiness is immune to the serious recessions and animal health problems ASF caused in neighboring Asian countries.
The greatest demand downturn did not occur in its large but domestically centered poultry sector but in its export-driven aquaculture industry, where COVID-19 caused both the price and demand for lines such as shrimp and tilapia fell steeply. But with aquaculture a tenth of overall feed output, its downturn will not be enough to cause a fall in overall feed demand.
While 2020's COVID 19-dented output is staying flat, feed production is thereafter expected to grow at a CAGR of 5%, totaling around 26.8 million tonnes by 2025. Highly populated but land poor, it is increasingly dependent on imports of feed grains and protein meals, though the situation is made complex by government restrictions.
This is problematic: Since 2011, feed output has risen 79% but corn output by less than 35%. Moreover, domestic feed corn quality is suboptimal but imports are strictly controlled and only allowed for industrial, non-feed uses. To get around the resulting domestic feed grain deficit, feed wheat imports jumped from 0.15 million tonnes in 2011 to approximately 2 million tonnes. Soymeal imports have shown similar explosive growth, from 2.5 million tonnes in 2010 to approximately 4.8 million tonnes today.
Going forward, Indonesia has to make a cruel choice between protecting corn farmers cultivating a crop unsuited to equatorial weather, or maximizing meat making efficiency via the liberalization of feed grain imports. Improving the quality and quantity of feed grain imports could enable feed demand to grow above its projected 5% rate; thereby ensuring greater gains in meat production and consumption too.