With many confusing claims regarding supplementation of trace minerals, nutritionists can struggle to understand which amount and form is best.

Trace minerals such as Zn, Cu, Mn, Fe, I, Co and Se are essential for supporting animals' profitability, productivity, and well-being. Correctly feeding trace minerals is an evolving science, which has advanced considerably since oxide-based trace minerals were first introduced in the early 20th century. Since then, new categories of trace minerals have been developed along with many claims about how mineral supplementation can affect animal performance and producers' bottom line.

Inorganic trace mineral sources such as Sulphates and oxides are inexpensive. However, the metal contained within their structures has very low bioavailability. Also, research has defined several negative side effects of these sources on feed quality. Due to their high solubility/reactivity both within the feed and in the animal's digestive tract. When these highly soluble sulphates come in contact with moisture in the diet, their metals are easily released. The freed metals can bind with antagonists (phytate, AA, Ca, P, etc.) in the feed before they reach the point of absorption. Once the trace metal binds with an antagonist, both the trace metal and the nutrient are no longer available to the animal. These factors make it difficult for nutritionists to determine the correct amount of trace minerals to include in diets.

To compensate for these challenges, organic-based trace minerals were introduced (in the early 1970s). Typically, these products are characterised by their improved stability, resulting in more metal being delivered to the point of absorption. On the negative side, these products have low metal potencies and are significantly more expensive than market alternatives. 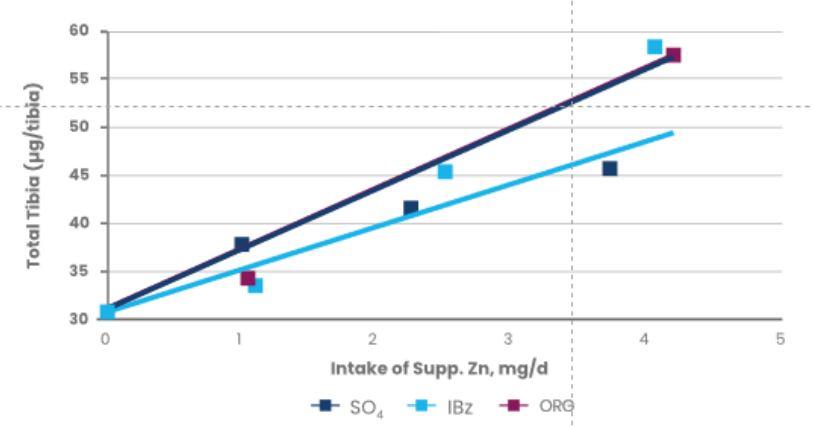 Fig. 1  A comparison of bioavailability of Sulphate, IntelliBond and Organic sources of trace mineral.

Beyond a trace mineral's bioavailability, nutritionists must ensure that the mineral is accurately and consistently delivered to livestock. Given the many steps involved in adding ingredients to an animal's diet, this can be a challenge, as the cumulative total of trace minerals in a tonne of complete feed is typically less than 0.5 kg (0.05%). A precision trace mineral nutrition programme involves selecting an optimal level of the most bioavailable source of trace minerals, and accurate weighing, ensuring that a homogenous blend of the right ingredients is available for the animal.

The benefits of Synergy

For decades, Trouw Nutrition has focused on developing, validating and implementing precision trace mineral nutrition programmes that support animal efficacy and profitability. Trouw Nutrition is now introducing IntelliOpt. IntelliOpt is an innovative species-specific trace mineral solution which uses both organic (Zn, Cu, Mn, Fe, Se) and hydroxy (Zn, Cu, Mn) trace mineral sources together in a synergistic blend with other essential trace minerals (Co, I) to consistently deliver high metal bioavailability at a cost-effective price.  A key advantage of this solution is the combination of both hydroxy (Selko IntelliBond) and organic (Selko Optimin) trace mineral sources in one convenient package to further improve animal performance during periods of high productivity and/or challenge. The synergy lies in the complimentary release profiles, allowing animals to absorb more trace minerals throughout their intestinal tract.

A meta-analysis of four trials showed that a combination of 70 ppm of zinc from IntelliBond, and 10 ppm of zinc from Optimin significantly improved final body weight and FCR of broilers, demonstrating the clear advantage of combining both sources (Figure 2). Additionally, when the full IntelliOpt concept was applied, a significant (P<0.05) improvement in feed conversion ratio was observed, compared to sulphate sources. Giving a 3.5 X return on investment. This indicates that overall profitability of a broiler flock can be optimised, by investing in a higher quality trace mineral programme. 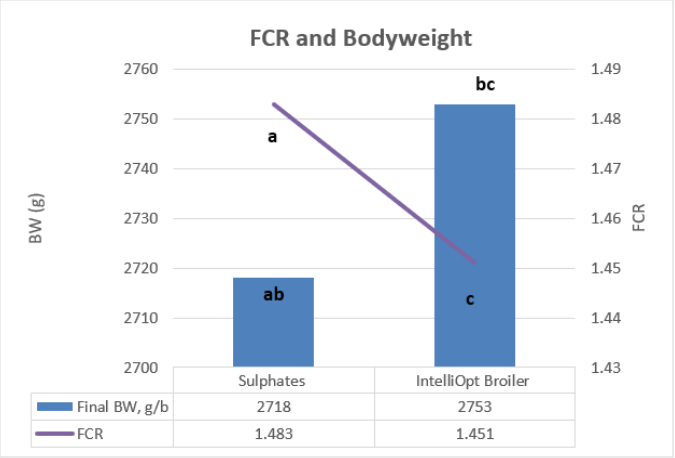 The need to match animal requirements with research validated products and programmes is becoming more important. Achieving this objective using a precision trace mineral nutrition programme such as IntelliOpt is a proven solution that can result in improved animal productivity, well-being and environmental compliance.