There is growing interest among nutritionists in feeding reduced protein diets to broiler chickens. Although nearly a century of research has been conducted providing biochemical insights on the impact of reduced protein diets for broilers, practical limitation still exists. The present review was written to provide insights on further reducing dietary protein in broilers. To construct this review, eighty-nine peer reviewed manuscripts in the area of amino acid nutrition in poultry were critiqued. Hence, nutritional research areas of low protein diets, threonine, glycine, valine, isoleucine, leucine, phenylalanine, histidine, and glutamine have been assessed and combined in this text, thus providing concepts into reduced protein diets for broilers. In addition, linkages between the cited work and least cost formation ingredient and nutrient matrix considerations are provided. In conclusion, practical applications in feeding reduced protein diets to broilers are advancing, but more work is warranted.
Background
Investigations in reducing dietary crude protein (CP) in chickens began in the early 1940's, which commenced nearly a century of exploration in this area of poultry nutrition research. Advances have been made, but many of the hurdles identified in the 1940's vex poultry nutrition researchers today. Most notably, in the early 1940's research was carried out in chickens fed various diets substituted with ingredients differing in protein and energy content, and it was established that diets with increased protein resulted in chickens having over two fold lower body fat content [1]. In addition to the former effect on carcass composition, low CP-amino acid fortified diet research in the early 1940's failed to produce birds with equal performance to higher CP fed control birds that consumed less feed grade amino acids [2]. Decades thereafter ensuing industrial growth of broiler production, low CP-amino acid research continued, but it was widely accepted in practice that the dietary inclusion of amino acids beyond the sulfur containing amino acids and lysine would not economically sustain production in practice [3–5]. Towards the end of the twentieth century, adoption of the third feed grade amino acid, i.e., Lthreonine (Thr), was aided by advances in ideal protein formulation tools and the expression of amino acids in dietary formulation on a digestible basis [6]. At present, L-valine (Val), the fourth limiting amino in most broiler diets devoid of meat meals, is being used in practice. Further, the approach of U.S. nutritionists on the use of feed grade amino acids in least cost poultry diets from 1950 to present has been reviewed [7] and is summarized in Table 1. Indeed, formulation adoption of a synthetic methionine source with crystalline lysine, threonine, valine, isoleucine, and arginine can allow for over a 50% reduction in soybean meal and over a 20% reduction in crude protein in a broiler grower diet based on corn, soybean meal, meat and bone meal, and distillers grains.

Production of poultry (e.g., primarily broilers) from the Food and Agriculture Organization of the United Nations 2005/2007 estimate to the 2050 projection will more than double from 82 to 181 million tons of poultry products [8]. In order to provide to the future need for poultry consumption, the bulk of the relative increase in poultry production will occur in developing countries with specific reference to those in Sub-Saharan Africa, North Africa/Near East, South Asia, and East Asia [8]. The former regions are more self-sufficient in cereals than that of oilseeds, deeming the need to broaden practical knowledge for feeding poultry low CP-feed grade amino acid fortified diets to satisfy future food security.
Utilization of the ideal protein concept allows for precision feeding of poultry, but a keen understanding of the birds' dietary lysine need over time is warranted. However, additional amino acids must be continuously assessed as their minimums can vary based on dietary protein status, bird strain, bird environment, and company production objectives to satisfy economics [9]. As such, this review will provide an assessment of key amino acid considerations in the low CP puzzle and future research considerations which have been summarized in Table 2. 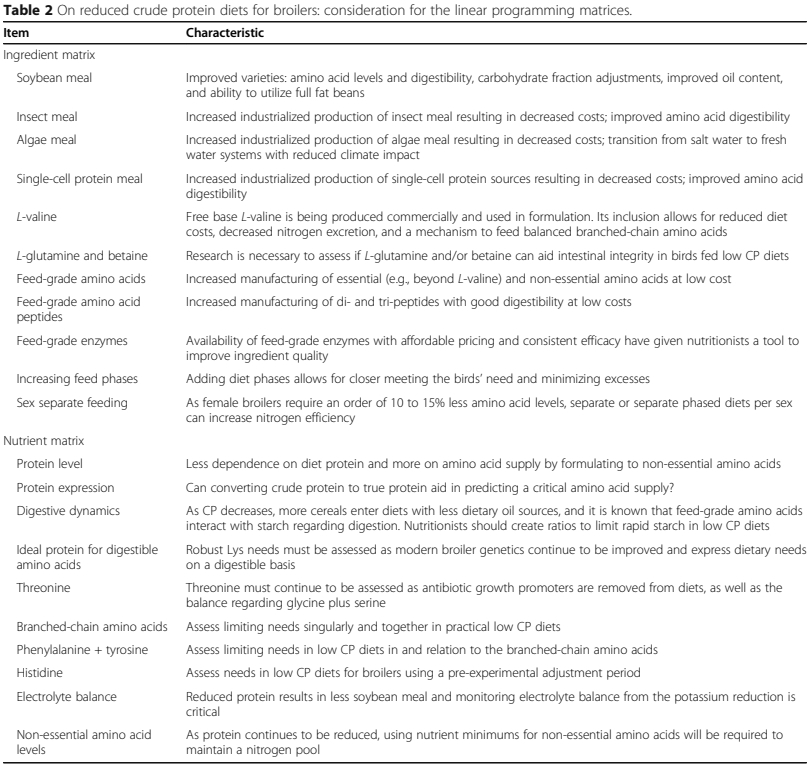 Article made possible through the contribution of M. Kidd et al., University of Arkansas System