Login
Subscribe
August 5, 2020
Vietnamese feed and livestock rising: Vietnam is now a top importer of feed crops, Southeast Asia's leading meat producer and red meat eater
An eFeedLink Hot Topic
By Eric J. Brooks
Vietnam has the distinction of having the fastest-growing feed sector of any large world agribusiness market. From approximately 2.9 million tonnes in 2001, feed production totaled 8.9 million tonnes by 2011 and an Alltech Global Feed Survey estimated 19.6 million tonnes by 2018 before ASF took its toll.
Over these two decades, per capita chicken jumped from 3.7kg to 11; pork consumption per capita from 12.9kg –that's 30% more pork than the 23kg per capita far wealthier Singaporeans or Americans eat. It produces as much meat as more advanced Thailand or Indonesia, which has three times as many people. 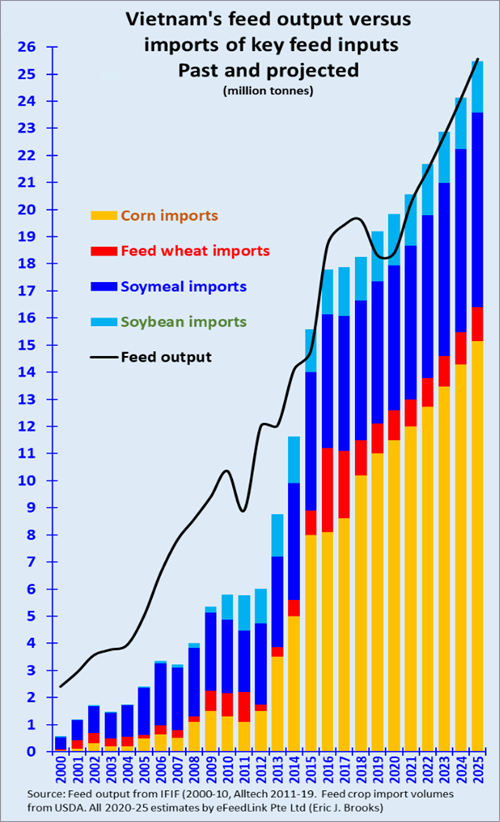 Ten years ago, we predicted that Vietnam could one day overtake Japan and South Korea to become the world's second-largest soymeal importer and a top corn importer –and that day has arrived. Not only did Vietnam overtake Japan and South Korea in soymeal imports: so did Indonesia, Philippines, and Thailand –and all the above (Vietnam included) are also top importers of raw beans too.
Along with being the world's top soymeal importer, Vietnam also went from exporting corn 15 years ago to account for 11.5 million of the over 18 million tonnes of corn Southeast Asia will import this year. That makes it the world's fourth-largest corn importing nation, behind only Mexico (18mt), Japan (16mt), and South Korea (11.8mt).
Much like China, Vietnam was one of the first nations whose economy had completely recovered from the lockdown, which in Vietnam's case ended in late April.
With protein demand still buoyant, another 5.5% contraction in pork production (to 2.225 million tonnes) will be offset by higher feed consumption by broiler, layer, dairy, cattle and aquaculture producers, keeping feed output flat near 18.3 million tonnes.
As the graph shows, this will be the third time in twenty years that Vietnam's rapid feed output is taking a pause, but growth will soon resume. We forecast a 10% recovery in 2021 feed output.
Thereafter, the 2001-18 11.8% annual expansion will decelerate to average growth of 6% into 2025, by which time Vietnam's feed output will be approximately 25.7 million tonnes.
With Vietnam's feed output poised to rise by over 1.2 to 1.5 million tonnes annually after 2020, its demand for feed grain and protein meals exceeds domestic growing and crushing capacity.
Feed grain wise, Vietnam's flat 4.5 to 5.5 million tonnes annual corn harvest cannot meet the current USDA estimated 14.4 million tonnes of feed grain demand. From now through 2025, Vietnamese feed grain demand will rise by over 900,000 tonnes annually.
Most of this will come from additional imports of corn (which totaled 11.5 million tonnes this marketing year), with alternative imported inputs such as feed wheat, DDGS, and possibly sorghum making up the rest. Vietnam's corn imports could total 15 million tonnes by 2025, second only to Japan (16 million tonnes) and Mexico (18 million tonnes) among top world corn importers.
Protein-wise, from 2013 through 2018 (when ASF broke out), Vietnam's feed output and soymeal demand increased by 63% and 65% respectively. Approximately a million tonnes of soymeal is supplied by two crushing facilities, which have a combined 1.5 million tonnes annual capacity (and import up to 1.8 million tonnes of beans annually).
Unless existing crushing facilities are expanded or new ones built, Vietnam's feed demand will push up the current 5.3 million tonne soymeal import volume to approximately 7.2 million tonnes by 2025. Even if Vietnam invests in new crushing facilities, soymeal import growth will level off but those of beans will rise again.
Either way, it will remain the world's top soymeal importer and overtake Japan as the world's second-largest corn importer by 2030. By then its pre-ASF 30kg per capita pork consumption will have risen to around 35kg.