Despite tapping the Chinese market after the effective closure of the Russian market, Brazil exported less pork in the first six months than it did during the same period last year.

In the six months through June, China accounted for over 30% of Brazil's pork exports, compared with 9% in the same period last year, after its purchase of Brazilian pork almost trebled year-on-year (+46,000 tonnes).

It will be recalled in on Dec. 1, 2017, Russia started to impose a ban on Brazilian pig meat and beef over concerns that the meat contained muscle-growth stimulant ractopamine. Ractopamine is banned for use in pork production in Russia, China and the EU. It is, however, used in some countries including the US and Canada as feed additive to promote leanness in meat of food animals.

Increased exports to Hong Kong, which grew 26% (+11,000 tonnes) and to South American neighbours including Argentina, Uruguay and Chile, which together imported an additional 9,700 tonnes from Brazil, were not enough to offset the combination of the loss of the Russian market and increased domestic production, reports AHDB Pork.

According to the pork division of the UK levy body Agriculture and Horticulture Development Board, the global market is currently well-supplied, and Brazilian exporters have so far struggled to diversify the number of international markets to which they have access.

For now, AHDB Pork said, Brazil may have to continue to look to its domestic market to support production levels. "The domestic pig price has fallen by nearly 20% since the beginning of the year, which should be boosting demand". 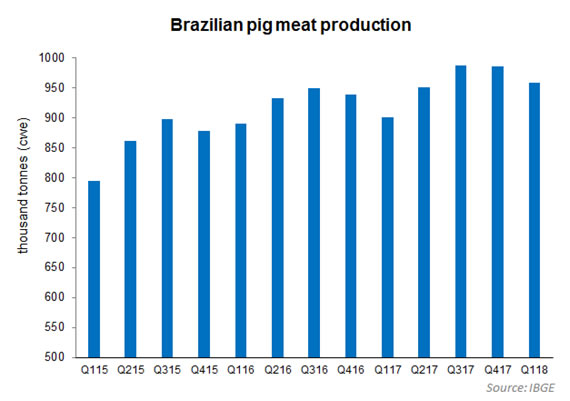