eNewsletter
June 30, 2015
Pricey soy, cheap Yankee chicken and the dilemma of Indian poultry
India's broiler sector is having a good year, but faces many challenges ahead.
By Eric J. BROOKS
An eFeedLink Hot Topic 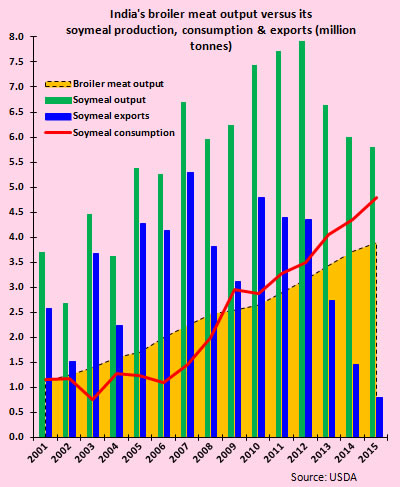 India's poultry farms are enjoying a profitable year but wondering for how long the good news can last. After pausing in 2009 and the first part of 2010, the industry enjoyed four consecutive years of strong annual output growth, ranging from 8.0% to 9.5%.
For now inflated production costs have been offset by an even larger rise in chicken meat prices. At first, gross margins, which were approximately 0% a year ago and ended Q4 2014 at 11%, initially slumped to barely 2% in early March, when broiler prices hit their yearly nadir.
Shortly after prices bottomed out, a cyclical second quarter rise in chicken demand coincided with Maharashtra state's ban on eating beef, which helped boost chicken consumption. With low early year profits holding back output, consumption jumped ahead of supplies. As a result, by the end of the second quarter, gross margins had risen to 22%, after which they usually slump into the late third quarter or early fourth quarter.
Dwindling soy supplies = rising feed costs
Prices are at their highest level since early 2013, but there is a cost to expensive poultry: First, with chicken getting expensive and income growth tapering off, broiler production will decelerate, from 2014's 8.0% rise to 3.725 million tonnes, to a smaller 4.7% rise to 3.90 million tonnes this year. Second, Q2 2015 gross margins would have been near record levels where it not for India's incredibly expensive soymeal, which costs approximately US$200/tonne or 55% more than the world price.
Refusing to undertake mass imports of either soybeans or meal, Indian broilers are outgrowing their domestic feed supply. In the ten years from 2005 through 2015 inclusive, chicken meat production will have doubled but with industry consolidation changing poultry diets from farm scraps to high quality feed materials, soymeal consumption quadrupled over this same time.
With feed demand outpacing domestic harvests, from early 2013 through the start of this year, world soy prices fell 40% while those in India increased by 42%. Although shortages were alleviated by keeping soymeal formerly exported for domestic consumption, this necessitated Indian soymeal costing as much as it would in Southeast Asian ports. India's GM-free soymeal also became heavily desired by EU farmers, which further jacked up its domestic price.
From being traditionally 20% cheaper than the world price, by early 2014, a 55% spread opened between India's soymeal cost and its international price. Although both Indian and CBOT soymeal costs have fallen steeply over the past two years, local soy's 55% premium over its international price has stayed roughly constant.
It means that while broiler farms could break even around INR30/kg (US$0.47/kg) ten years ago, even with broiler meat now selling at an average of INR85/kg (US$1.40/kg), Rabobank's Q2 Poultry Quarterly estimates that a price fall below INR70/kg (US$1.09/kg) would tip most farms into a net loss position. That could happen in the third quarter, which is traditionally a time of declining poultry prices.
American imports on the horizon
But while high soymeal costs are threatening margins over the next quarter, a much larger issue looms over the next eighteen months: In 2012, America took India to the World Trade Organization (WTO), alleging that US poultry meat was unfairly banned from India's market.
After the WTO decided in America's favour, India appealed the decision. However, in early June, the WTO announced that India had lost its appeal. India must now open up to US poultry meat within 12 to 18 months -or face trade bans amounting up to US$300 million of its own exports annually. It has already made clear that it will take 18 months, meaning that American chicken legs, drumsticks and wings will likely to appear in Indian supermarkets in early 2017. 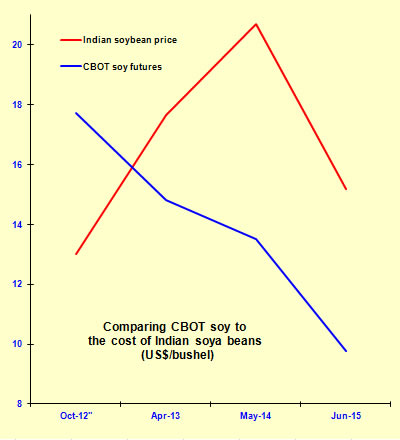 From a purely economic perspective, the WTO ruling makes sense: Whereas America has surplus chicken legs unwanted by domestic consumers, they highly desired and in short supply within India, where bonier parts are preferred.
Furthermore, cheaper US chicken parts would provide cost relief for Indian consumers, whose poultry consumption growth is being held back by historically high prices. Without additional levies, US drum sticks will cost INR18/kg (US$0.28/kg), versus INR50/kg (US$0.78/kt) for their Indian competition. Even with a 100% tariff industry spokesmen anticipate expect to be levied, they will greatly undercut the cost of local supplies.
On one hand, in an interview with thepoultrysite.com, Amit Saraogi, chairman of the Compound Feed Manufacturers Association (CLFMA) of India warns that with chicken legs accounting for 40% of India's US$9.37 billion market, "The domestic poultry industry will be destroyed."
On the other hand, not everyone in the industry is as fearful or concerned. G.B. Sundararajan, managing director of Suguna Foods counters that, "The market is mature enough to compete with the US companies." He explained that it, "Will take ten years to impact [the industry]. This will open the cost competitiveness in the sector and there is no need for us to worry."
But Suguna only sells whole chickens and not individual parts like legs -and not all Indian producers are in the same advantageous position. US imports would drive smaller chicken parts suppliers out of business. That would in turn speed up consolidation, which would clearly be to the advantage of large scale, whole chicken suppliers like Suguna. -Even so, if cheap imports accelerate a consumption shift away from whole birds to parts (as usually occurs with modernization), even whole chicken suppliers like Suguna could be impacted.
In truth, both sides of the argument have angles that neither side is admitting. First of all, for cultural reasons, US chicken legs can never completely drive out their local Indian competition. Ajay Deshpande, co-owner of the Pune-based Siddhivinayak Breeding Farm, points out that while Indians clearly prefer freshly slaughtered chicken meat, boney US parts would be frozen for many months before reaching supermarket shelves.
That is not the only cultural barrier imports would face. Ravinder Reddy, technical director at Hyderabad's SR Hatcheries states that, "Indian consumers prefer to eat tender chicken, so we sell the birds when they weigh about 2 kg." With US birds weighing in the 4kg to 5kg range, their longer maturity time would make them be perceived as, "coarse meat." Consequently, like Hanwoo beef in South Korea or native chicken breeds in China, imported US parts would capture the market's low end, mostly supplying discount supermarkets, hotels and institutions.
Import soy or import chicken?
Alongside such cultural safeguards, much can be done to make Indian poultry far more cost competitive than it currently is. For example, the CLFMA states that the Philippine poultry sector was devastated by cheap US imports -but they fail to mention that until Manila's policymakers boosted local corn prices above its international cost, local chicken had no problem competing against imports. Just like in Philippines, over half the cost difference between US and Indian chicken is due to the latter's extremely high soymeal cost.
With India gradually losing its self-sufficiency in soy and its government blocking soy imports, the resulting feed cost inflation is straining both farmers' bottom lines and consumers' wallets. In an era of free trade, India can either liberalise soy imports and profoundly lower its poultry sector's production costs -or it can protect domestic soy growers and watch chicken imports devastate its broiler sector. The latter outcome could derail its booming poultry sector's rapid growth.
Ideally, soy import liberalization should be rolled out simultaneously with incentives designed to boost poultry rearing efficiency, import better broiler breeds or restructure farm management. Should the resulting one-third reduction in soymeal costs coincide with rising productivity, it could close today's large cost spread between Indian chicken and its US imports.
For now, clock is now ticking;and India's government has less than eighteen months to do what is best for the long term health of its poultry sector.