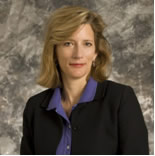 Thompson led Cargill Value Added Meats to exceptional achievements over the past three-and-a-half years, such as the successful integration of an acquisition and earning the Cargill Chairman's Award for High Performance.

Prior to joining Cargill, Thompson held a number of marketing and developmental roles with consulting firms and educational institutions.

Thompson holds a bachelor's degree from Harvard University in Cambridge, Massachusetts, and an MBA from Columbia University in New York City.

Her replacement to lead Cargill Value Added Meats will be announced at a later date.