EU pork export volume up, value down in April

Exports to China, the EU's largest destination for pork, increased 8% to 51,500 tonnes in April compared with year-earlier levels. The price per tonne for shipments to China declined 18% compared with April 2017, and so resulted in the overall value of these exports falling by 11%. Meanwhile, the value of exports to Hong Kong declined by almost a third, with volumes falling 23% year-on-year alongside lower export prices.

Exports to Japan and South Korea increased 19% (+4,700 tonnes) and 25% (+4,500 tonnes) respectively, with value also rising overall, albeit more modestly. Shipments to the Philippines, however, declined 5% (-2,800 tonnes), with the value of this trade almost halved.

As per the pork division of the UK levy body Agriculture & Horticulture Development Board, volume shipments to the US increased 35% to almost 11,000 tonnes. However, this only translated into a 6% growth in value, reflecting significant price cuts. 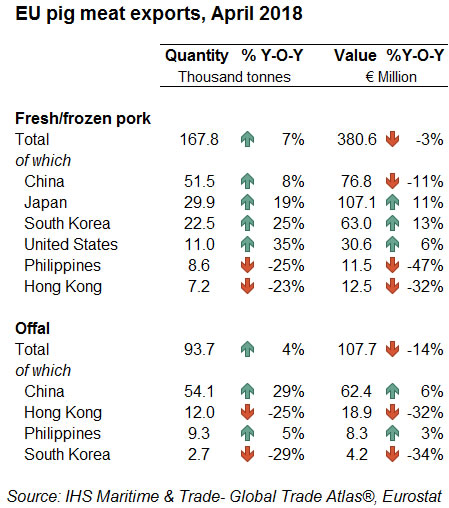