Not only in human food, but also in animal feed the interest in vegetable ingredients is increasing. Whereas nutritionists typically acknowledge animal protein as being a highly digestible and a quality feed ingredient, this is questionable. Food safety and sustainability make plant-based protein emerge. Not to mention vegetable proteins can be highly digestible and help to promote gut health, which is of crucial importance in young animal nutrition.

Why are food safety and quality of animal origin ingredients sometimes questioned? Animal products are sensitive for contamination with bacteria, viruses, heavy metals, antibiotics and other toxins. For example the risk of toxic biogenic amines in animal proteins and the possible fat oxidation in fishmeal. Over the years public and political concern has grown extensively about safety of feeds with animal origin. Not only because of the regular incidents of entero-bacterial infections with Salmonella. But more recent the concern about the spread of African Swine Fever. At the moment, in some parts of the world, the use of animal products is being discouraged or even banned in the context of the virus' emergence. In addition animal-based feed ingredients show a wide variety in nutrient level, negatively impacting technical farm results. Today's technology is such that vegetable protein sources can be processed into high quality, consistent ingredients for piglets and young poultry. A fine grinding process for example, eliminates the negative effects of Anti-Nutritional Factors (ANF), such as TIA and β-conglycinine, reassuring digestibility and a build-up for ANF tolerance beneficial for later life.

Because of these reasons animal protein sources are gradually disappearing in young animal diet formulations. In the past, fishmeal inclusion rates were considered optimal at around 10% for piglet and young poultry feeds. Nowadays, however, most premium piglet feeds may contain only 5% of fishmeal and broiler pre-starter feeds containing any fishmeal are rare, especially when using high-quality products. It is projected that by 2025, fishmeal will be an exception in livestock diets. A similar tendency is probable for other animal protein.

How does animal and plant protein digestibility compare to each other? Plant-based proteins are not only safer, often they are a cheaper, more price and available stable alternative. Vegetable proteins are generally digested not as easily as animal proteins. However when processed correctly this can be improved and even reversed. Young animals have trouble breaking down protein, due to their immature gastrointestinal tract where enzyme excretion and digestion is not fully up to speed yet. To guarantee the animal's performance, growth and feed efficiency, the protein level and amino acid composition and an optimal digestibility is important. The percentage of Standardised Ileal Digestibility (SID) represents how efficient an animal can use amino acids; close to 100% is more efficient. The higher the protein and amino acid digestibility, the more is used for growth.

Undigested protein is used in the hind gut as a substrate for microbiota and is transformed into amines and urea. This leads to a shift in the microbiota that is favourable for harmful bacteria such as E. coli and Clostridia, causing diarrhoea or other sickness. Additionally young animals are prone to a low feed intake, especially during stressful periods such as weaning. Due to a lack of enteral nutrition, the animal's intestinal villi are shortened. Which limits the absorption of nutrients in the intestinal wall, and also results in a possible malfunction of the immune system. Known as the leaky gut syndrome, see figure 1. A damaged intestinal wall causes unwanted substances and bacteria to cross the intestinal barrier more easily and thereby triggers inflammatory reactions. In short, particular for young animals high digestibility is desired, therefor plant-based proteins could be of high interest and help to promote their gut health. 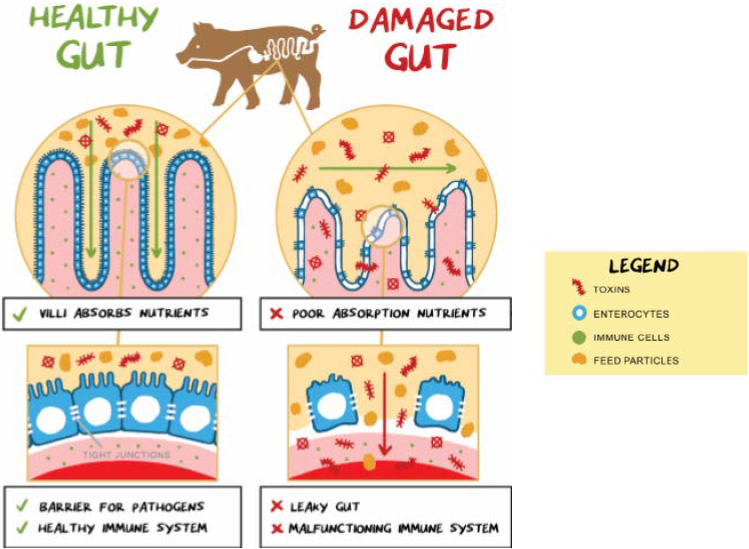 In recent years, numerous in-vitro lab digestibility tests have been performed on JPC 56 and FMR Ω 3, showing average protein digestibility levels of 97%. Where in-vitro results are considered as a best estimate, in-vivo testing provides the most accurate and ultimate testing of digestibility. Recently, an extensive research by Prof Dr Hans Stein at the University of Illinois, United States, was performed in cannulated weaning pigs to analyse in-vivo digestibility of these protein concentrates in comparison with steam-dried Peruvian fishmeal. 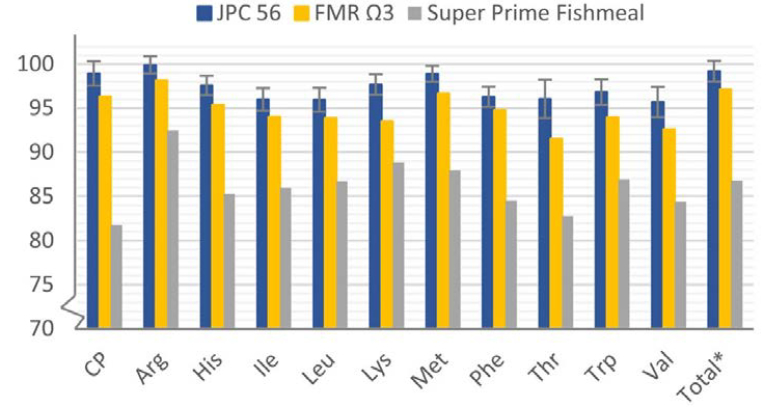 The results show an excellent in-vivo protein digestibility of Joosten Protein Concentrates, which confirms historical in-vitro data. SID of CP is 99.0% and 96.3% for JPC 56 and FMR Ω 3 respectively, compared with 81.8% SID of CP for Super Prime Peruvian fishmeal (P<0.001), see Figure 2. The SID of crude protein and all indispensable amino acids are greater (P < 0.05) in JPC 56 and FMR Ω 3 than in fishmeal. The values for SID of amino acids in fishmeal were intermediate between values published for North American fishmeal and European fishmeal. The SID values of crude protein for Joosten Protein Concentrates are higher compared to other available protein concentrates, see Table 1.

Article made possible through the contribution of Joosten
Video >
Technical Paper >
A cross-sectional study of antimicrobial usage on commercial broiler and layer chicken farms in Bangladesh
Commercial poultry production is growing rapidly in Bangladesh to address the increasing demand for poultry meat and eggs. Challenges faced by producers include the occurrence of p ...
Gut health - the key to good performance
Perhaps as a farmer or feed compounder you believe that you know exactly what constitutes 'gut health'. Yet defining gut health isn't easy. A healthy gut must be health ...
Say no to antibiotics with glycerides - part 1: 'monoglycerides'
Worldwide, nutritionists and researchers are working on the development of high quality animal feed without growth-promoting antibiotics (AMGPs). Despite the fact that this effort ...