eNewsletter
June 12, 2015
A bad time to be growing oilseeds
Why soy has a much longer bear market path to travel than corn.
By Eric J. BROOKS
An eFeedLink Exclusive Commentary 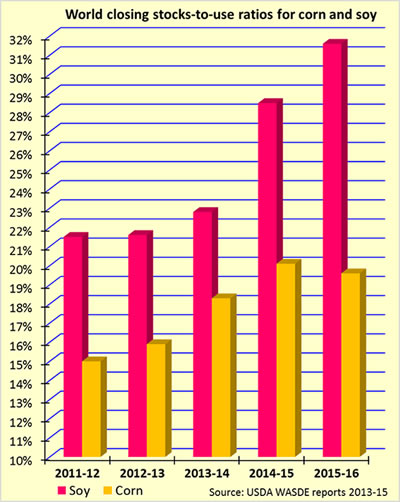 Although corn remains in an oversupply situation, soy is even further away from reaching the end of its bear market. At 990 million tonnes, world corn production is projected to fall 1% and return to the same level it was at two years ago. 2015-16 world soy harvests are projected to flatten out and fall a mere 0.3% from 2015-15 levels. Unfortunately, that will still be 34.4 million tonnes or 12.1% more than the quantity of beans grown just two years ago.
Similarly, whereas falling planted acreage has started to correct the imbalance between corn supply and demand, this is not the case with soy. World corn reserves went up 12.9%, from 174.5 million tonnes two years to 197.0 million tonnes in 2014-15, but are projected to fall 0.9%, to 191.95 million tonnes in 2015-16.
Clearly, corn supplies have at the very least, levelled out. In fact, if planted area or weather fall below expectations, world corn inventories could fall by a small, but materially significant amount.
While that's hardly a great improvement, it is far better than the situation soy finds itself in. From 2013-14 through to the end of the marketing year ending this August 31st, America's record harvest jacked up world inventories a whopping 20.9 million tonnes or 33.3%, from 62.8 million tonnes  to 83.7 million tonnes.
Going forward, amid topped out corn supplies, 2015-16 soy inventories are projected to jump yet another 14.9%, to 96.2 million tonnes. –But even these bloated estimates may turn out to be too low: With El Nino conditions expected to predominate over the second half of 2015, the resulting moist South American growing weather may push soy yields in Brazil and Argentina to higher than expected levels later in the year.
Whereas corn's 2015-16 closing world stocks-to-use ratio is falling slightly, from a USDA estimated 20.1% in 2014-15 to 19.6% in the upcoming marketing year, soya bean world stocks to use ratio is rising even further, from 28.5% in the current marketing year to 31.6% in 2015-16.
Soya beans are also being dragged down by the oil component of the soy complex. The latter has lost market share to palm oil, amid news about soaring Malaysian exports rising. With Malaysia's palm oil inventories rising at the same time as exports, palm oil cannot rise in value and will continue to transfer deflationary pressure to soy beans and soymeal.
Burdened by a significantly larger global oversupply than corn and facing more intense competition from other oilseeds than corn does from substitute feed grains, soy appears to have nowhere to go but down.