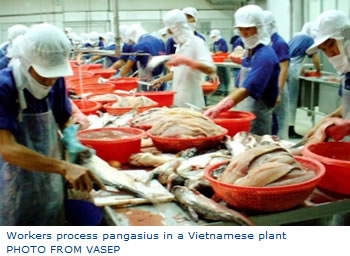 Vietnam pangasius exporters generated US$507.54 million in revenues during the first four months, up 5.2% from last year. In April alone, the value is at an estimated $142.08 million, up 13% compared with the same month in 2015.

The January-April figures signaled the recovery of pangasius consumption in the global market, especially in large markets. In early and late 2015, pangasius sales posted negative growths, as import prices slumped. However, in the first four months of this year, pangasius import prices in some markets rebounded.

Notably, the shipments to China-Hong Kong witnessed a year-on-year significant increase. This market took up 13.3% of total export value, displacing the Asean from its third-place position among the biggest importers last year. Asean ranked fourth during the first four months, accounting for 8.7% of total exports. This goes without saying that pangasius exports to Asean countries are on a downtrend.

Pangasius export turnover to Asean region in January-April reached $44.03 million, down 3.3% year-on-year. Of the Asean countries, Thailand remained as the leading importer of Vietnamese pangasius, valued at $15.87 million, followed by Singapore and the Philippines, valued at $11.17 million and $9.41 million, respectively.

During the period under review, the US remained as the largest importer of Vietnamese pangasius valued at $115.16 million (accounting for 22.7% of total export value), up 7.2% from the same period last year. The US particularly increased its imports of fresh pangasius fillets.

In mid-March, the price of Vietnamese raw pangasius soared after it had stayed stable. This was driven by drops in the country's pangasius farming area and production, especially in some key provinces. Pangasius price is now up to VND22,000 (98 US cents) per kilo.

Source: Vietnam Association of Seafood Exporters and Producers
Video >
Technical Paper >
Intestinal development with glycerides of butyric acid
Butyric acid focuses on intestinal development and gut health. The short-chain fatty acid is an energy source, but more importantly it has antibacterial properties and is therefore ...
Effects of dietary tributyrin on intestinal mucosa development, mitochondrial function and AMTK-mTOR pathway in weaned pigs
Piglets are often subjected to nutritional, physiological and immunological stresses during the weaning process. It has been determined that weaning can quickly lead to the intesti ...
Effects of tributyrin supplementation on growth performance, insulin, blood metabolites and gut microbiota in weaned piglets
In animal farming, alternatives to antibiotics are required due to the increase of antimicrobial resistance. In this contest, tributyrin showed the ability to promote gut health, t ...