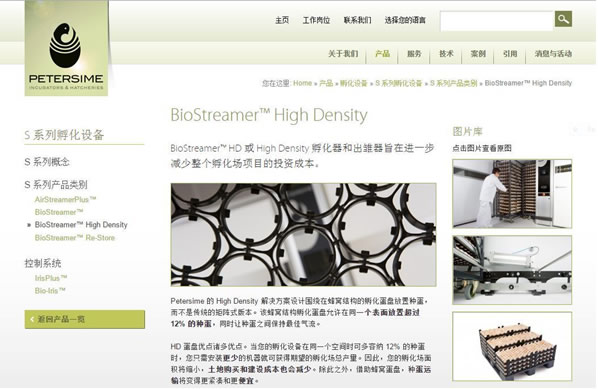 Petersime has launched the Chinese version of its website, as part of its continuing effort to expand their reach and support to their international customers.

Enabling customers to consult their website in Chinese will provide them a wider and more convenient spread of Petersime product information, service and training offerings, and news.

Kurt Haeck, Manager Service Department, says, "Striving for unlimited service towards customers on a worldwide scale is a challenge every day. Achieving the highest standards of technical knowledge and support for our customers requires a lot of training. It is crucial, however, to make that top notch support available and accessible to all of regional markets, in different time zones and in many languages. We think global, but certainly act local as well!"

The demand for poultry meat continues to rise and is expected to become the number one meat in Asia, with China being one of the main markets. Mandarin Chinese is the most widely spoken language in this most populated country in the world. With China having such a large market potential, Petersime strives to address their customers in the best way possible.

The direct link to the Chinese website can be accessed here: http://www.petersime.com/zh-TW/