Triggering disease - endotoxins in animal production should not be underestimated

Triggering disease - endotoxins in animal production should not be underestimated

Bad health status of the animals in stressful situations or an aggravation of the disease after antibiotic treatment? The answer might be endotoxins.

Endotoxins, together with exotoxins, are bacterial toxins. In contrast to exotoxins, which are actively secreted by living bacteria, endotoxins (name "endotoxin" greek; endo = inside; toxin = poison) are components of the outer cell membrane of gram-negative bacteria such as Escherichia coli, Salmonella, Shigella, and cyanobacteria (blue-green algae). They are only released in case of

Figure 1: the location of endotoxins within the bacterial cell (Alexander and Rietschel, 2001) 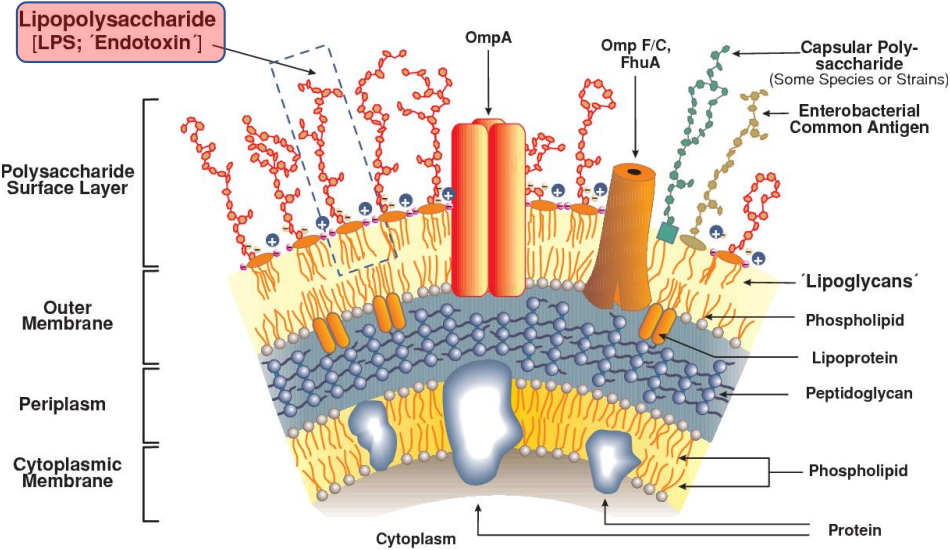 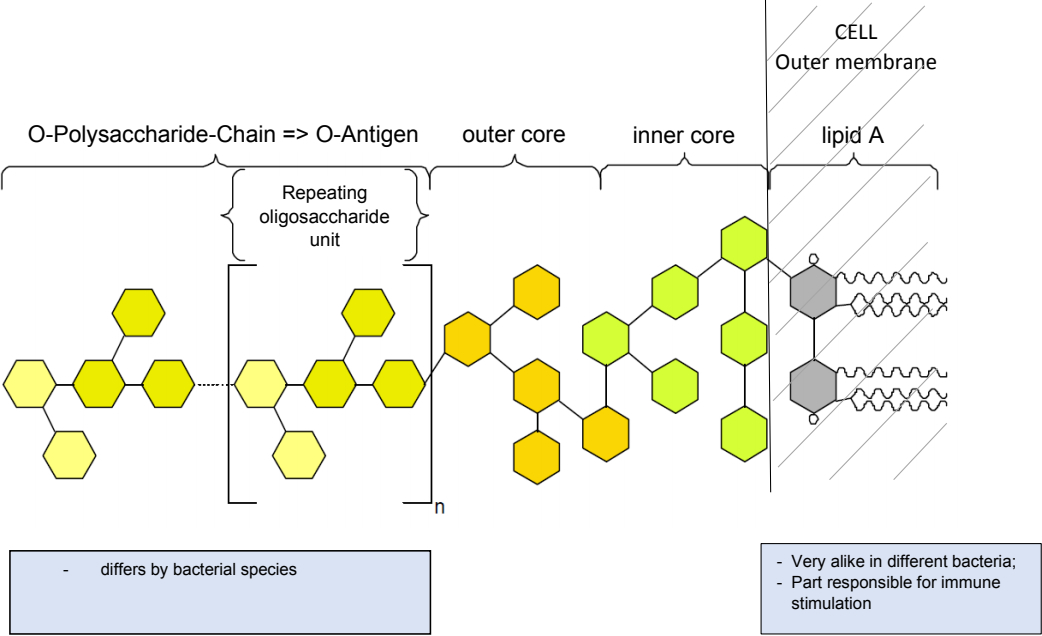 Endotoxins belong to the so-called pyrogen-agents (they provoke fever), activating several immunocompetent cells' signaling pathways. Early contact with endotoxins leads to activation and maturation of the acquired immune system. Braun-Fahrländer and co-workers (2002) found that children exposed to endotoxins had fewer problems with hay fever, atopic asthma, and atopic sensitization. This might be an explanation that in human populations, after the elevation of the hygiene standards, an increase of allergies could be observed.

Reasons for increased exposure of the organism to endotoxins

Endotoxins usually occur in the gut, as the microflora also contains gram-negative bacteria. The precondition for endotoxins to be harmful is their presence in the bloodstream. In the bloodstream, low levels of endotoxins can still be handled by the immune defense, higher levels can get critical. An increase of endotoxins in the organism results from higher input and/or lower clearance or detoxification rate

Higher input of endotoxins into the organism

Stress situations such as parturition, surgeries, injuries can lead to ischemia in the intestinal tract and translocation of endotoxins into the organism (Krüger, 1997). Other stress situations in animal production, such as high temperatures and high stocking densities, contribute to higher endotoxin levels in the bloodstream. Stress leads to a higher metabolic demand for water, sodium, and energy-rich substances. For a higher availability of these substances, the intestinal barrier's permeability is increased, possibly leading to a higher translocation of bacteria and their toxins into the bloodstream.

-  Higher levels of endotoxins in pigs in an experimental study suffering from stress due to loading and transport, elevated temperatures (Seidler (1998) cited in Wilken (2003)).

If endotoxins, due to continuous stress, consistently get into the bloodstream, they can be stored in the adipose tissue. The SR-B1 (Scavenger receptor B1, a membrane receptor belonging to the group of pattern recognition receptors) binds to lipids and the lipopolysaccharides, probably promoting the incorporation of LPS in chylomicrons. Transferred from the chylomicrons to other lipoproteins, the LPS finally arrives in the adipose tissue (Hersoug et al., 2016). The mobilization of energy by lipolysis e.g., during the beginning of lactation, for example, leads to a re-input of endotoxins into the bloodstream.

3.  Damage of the gut barrier

In normal conditions, due to bacterial activity, endotoxins are present in the gut. Damage of the gut barrier allows translocation of these endotoxins (and bacteria)  into the bloodstream

High yielder cows e.g., are fed diets rich in starch, to provide enough energy for milk production and maintenance with a low content of fiber, this often leads to subclinical or clinical acidosis. When gram-negative bacteria in the rumen are killed by the low pH, their lipopolysaccharides are released.

In a study with humans as representors of the monogastric species, Deopurkar and co-workers gave three different drinks (glucose – 100% carbohydrate, orange juice – 92% carbohydrate, and cream - 100% fat) to healthy participants. Only the cream drink increased the level of lipopolysaccharides in the plasma.

Infectious diseases like mastitis, metritis, and other infections caused by gram-bacteria such as E. coli, Salmonella, etc. can be regarded as sources of endotoxin release.

During the post-partum period, the organism is in a catabolic phase, and lipolysis is remarkably increased for energy generation due to milk production. Increased lipolysis leads, as mentioned before, to a release of endotoxins out of the adipose tissue but also fatty degeneration of the liver. A fatty degenerated liver cannot bring the same performance in endotoxin clearance than a normal liver (Andersen, 2003; Andersen et al., 1996; Harte et al., 2010; Wilken, 2003).  In a study conducted by Andersen and co-workers (1996), they couldn't achieve complete clearance of endotoxins in cows with fatty livers. The occurrence of hepatic lipidoses increases after parturition (Reid and Roberts, 1993; Wilken, 2003).

Also, other diseases of the liver influence endotoxin clearance in the liver. Hanslin and co-workers (2019) found an impaired endotoxin elimination in pigs with pre-existing systemic inflammatory response syndrome.

Figure 4: Relation between lipid metabolism and endotoxin metabolism (according to Fürll, 2000, cited in Wilken, 2003)

Endotoxins, on the one hand, can positively stimulate the immune system when occurring in small amounts (Sampath, 2018). According to McAleer and Vella (2008), lipopolysaccharides are used as natural adjuvants to strengthen immune reaction in case of vaccination by influencing CD4 T cell responses. On the other hand, they are involved in the development of severe issues like MMA-Complex (Pig Progress) or a septic shock (Sampath, 2018).

MMA in sows is a multi-factorial disease appearing shortly after farrowing (12 hours to three days), which is caused by different factors (pathogens such as E. coli, Klebsiella spps., Staph. spps. and Mycoplasma spps., but also stress, diet). MMA is also known as puerperal syndrome, puerperal septicemia, milk fever, or toxemia. The last name suggests that one of the factors intervening in the disease is bacterial endotoxins. During the perinatal phase, massive catabolism of fat takes place to support lactation. The sows often suffer from obstipation leading to higher permeability of the intestinal wall, with bacteria, respectively endotoxins being transferred into the bloodstream. Another "source" of endotoxins can be the udder, as the prevalence of gram-negative bacteria in the mammary glands is remarkable (Morkoc et al., 1983).

The endotoxins can lead to an endocrine dysfunction: ↑ Cortisol, ↓ PGF2α, ↓Prolactin, ↓ Oxytocin. MMA stands for:

- Mastitis, a bacterial infection of the udder.

Mastitis can be provoked from two sides: on the one hand, endotoxemia leads to an elevation of cytokines (IL1, 6, TNFα). Lower Ca- and K-levels cause teat sphincter to be less functional, facilitating the entry of environmental pathogens into the udder and resulting in mastitis. On the other hand,  due to farrowing stress, Cortisol concentrations get higher. The resulting immunosuppression enables E. coli to proliferate in the udder.

- Metritis, an infection of the uterus with vulvar discharges:

It leads to reduced contractions and, therefore, to prolonged and/or complicated farrowing or dead piglets. Metritis can be promoted by stress causing a decrease in oxytocin and prostaglandin F2α secretion. Morkoc and co-workers (1983) didn't find a relation between metritis and endotoxins.

- Agalactia, a reduction or total loss of milk production:

In many cases, agalactia is not detected until the nursing litter shows signs of hunger and/or weight loss. At worst, the mortality rate in piglets increases. Probably, milk deficiency is caused by lower levels of the hormones involved in lactation. Prolactin levels e.g., may be dramatically reduced by small volumes of endotoxin (Smith and Wagner, 1984). The levels of oxytocin are often half those in normal sows (Pig Progress, 2020)

A septic shock can be the response to the release of a high amount of endotoxins.

In the case of an infection with gram-negative bacteria, the animals are treated with (often bactericidal) antibiotics. Also, the immune system is eliminating the bacteria. Due to bacterial death, endotoxins are massively released. When not bound, they activate the immune system including macrophages, monocytes, and endothelial cells. Consequently, high amounts of cellular mediators like TNFα, Interleukin 1 (IL-1), IL-6, and leukotrienes are released. High levels of pro-inflammatory cytokines activate the complement and coagulation cascade. In some animals, then the production of prostaglandins and leukotrienes is stimulated, implicating high fever, decreased blood pressure, generation of thrombi in the blood, collapse, damaging several organs, and lethal (endotoxic) shock.

Endotoxic shock only occurs to a few susceptible animals, although the whole herd may have been immune-stimulated. A more severe problem is the decrease in the normally strong piglets' performance, deviating resources from production to the immune system because of the endotoxemia.

Lipopolysaccharides lead to an augmented release of prostaglandins, which influence gastrointestinal functions. Together with leukotrienes and pro-inflammatory mediators within the mucosa, they reduce intestinal absorption (Munck et al., 1988; Chiossone et al., 1990) but also initiate a pro-secretory state in the intestine. Liang and co-workers (2005) observed a dose-dependent accumulation of abundant fluid in the small intestine resulting in increased diarrheagenic activity and a decreased gastrointestinal motility in rats.

Acting against gram- bacteria can result in an even more severe issue – the endotoxemia. Endotoxins, besides having a direct negative impact on the organism, also contribute to some diseases. Supporting gut health by different approaches, including the binding of toxins, helps to keep animals healthy.

Article made possible through the contribution of EW Nutrition