Russia's imports of fresh and frozen pork rose by a hefty 59% to 50,200 tonnes during the first quarter compared with the same period last year, which showed that it continued to rely on foreign product to fill demand.

Volumes, however, were still less than the levels before the retaliatory 2014 food trade ban on the US, EU and other countries that had imposed trade sanctions following Russia's support of the rebels in Ukraine.

Based on data from the Federal Customs Service of Russia, the growth in imports was largely driven by increasing shipments from Brazil, which were up 86% on 2015. This growth was helped by the embargo against Ukrainian pork in place since January, according to the pork division of the UK's Agriculture & Horticulture Development Board.

With the devaluation of the real, Brazilian pork has become increasingly price-competitive, with its average unit price cheaper by 24% than in the same quarter in 2015.

According to AHDB Pork, the rise in imports may, however, be only temporary due to increasing domestic pork production and falling consumption of the meat, thus the possibility of oversupply.

Russian export levels have also been almost 7 times greater in the first quarter than in the same period last year as the government has heavily subsidised pig production investment projects, aiming for self-sufficient by 2020. 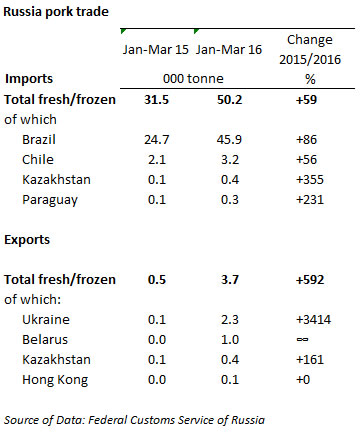