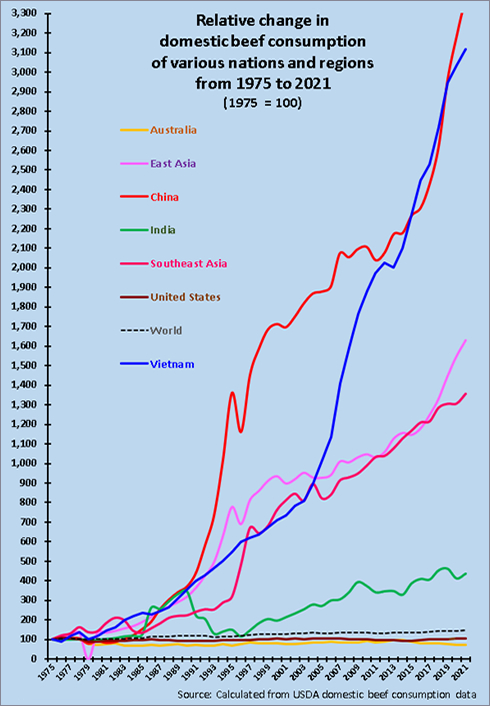 Beef exporters have been blessed with a country called China, but face a day of reckoning. On one hand, this nation's unquenchable red meat consumption has blessed them with record profitable export prices and record-high import demand. On the other hand, without China buying a third of world beef imports, the world market for red meat would collapse overnight. Once China rebuilds its hog herds, will it even need the 3.1 million tonnes of beef it now imports yearly?
In reality, the problem is not with China but with beef's spectacular incompetence at marketing itself, especially in western countries. In the western agribusiness echo chamber, decision-makers tell each other that beef is too expensive, too wasteful of resources, too unhealthy to ever account for the large proportion of protein consumption it once did –and they have created a self-fulfilling prophecy.
Anyone who looks at macro statistics and ignores detail will not notice what truly ails the beef cattle exporters: Superficially, world per capita beef consumption fell from 10.3kg in 1975 to 8.7kg in 2000 and 7.8kg in 2021. But one digs deeper, one finds that common beliefs about beef marketing are dead wrong.
First among these is the notion that falling per capita beef consumption is "inevitable". From 41kg in 1975, annual US per capita beef consumption fell to 25kg in 2020. The British went from eating 33.2kg of beef per person annually in 1975 to 20kg today. German annual per capita beef consumption fell from 24.1kg in 1975 to 14.6kg today. Australian beef consumption per capita fell by the most, from 69kg in 1976 to under 19kg in 2020.
First, the large 40% to 60% in US, Canadian, European, and Australian beef consumption did not mean these countries eat less meat. Even after this steep fall in beef consumption, America, Australia, and Canada continue to have the highest per capita meat consumption levels in the world. All these nations and western Europe are eating more meat per capita than in 1975 –but beef went from over 50% of US meat consumption in 1975 to 25% in 2020. From barely a tenth of all meat eaten by Americans in the early 1900s, poultry meat now makes up almost 50%.

But don't let dreary western meat statistics fool you: Falling per capita beef consumption is not inevitable! From under 1kg in 1980, China's per capita beef jumped to 2.5kg in 1995, 4.6kg by 2010, 8kg in 2021, and should total over 12kg by 2030. From 4kg per capita in 1980, Hong Kong's per capita beef consumption will exceed 50kg this year. Similarly, from under 1.5kg in 1970 to 8.5kg in 2000, South Koreans will eat 12kg of beef per capita in 2021.
Interestingly, despite beef's reputation as a "rich man's protein", there's no real relationship between beef consumption and disposable income. With a US$65,000 per capita GDP and 26kg per capita beef consumption, Americans 50% less beef than the people of Argentina (US$9,912), Uruguay (US$21,000), and Hong Kong (US$49,000), all of whom consume 50kg to 54kg of beef annually. With ground beef accounting for approximately 60% of US consumption, Americans do not merely eat less beef than a nation with 67% lower income much cheaper (at purchasing power parity): They eat less expensive lower quality cuts than Argentines too.
The real question is not "Why is China importing so much beef with a per capita GDP below US$10,000?" Beef farmers should be asking themselves, "Why did wealthy westerners suddenly stop eating so much beef? Is there anything we can do to change this?"
Beef is a victim of a brutal, fifty-year negative marketing campaign. Westerners reduced their beef consumption because it supposedly causes cancer and heart disease. The fact that cattle contribute to greenhouse gas emissions (mainly methane) was also used in negative campaigns against beef.
First, the "lipid hypotheses" that saturated fat found in red meat causes heart disease was never proven. Second, newer scientific research points to man-made trans-fatty acids causing heart disease –not the saturated fat found in beef. Similarly, studies showing a link between red meat and cancer were found to use processed meats that contained carcinogenic additives.
Third, while westerners assume non-meat substitutes are "healthy", vegetarian non-meat "steaks" and "burgers" contain significantly less total protein and inferior amino acid profiles compared to real beef. This means plant-based beef substitutes could have serious negative impacts on human health.
Fourth, scientists at the University of California have recently found that by including a particular red algae in feed rations, greenhouse gas emissions of beef cattle and dairy cattle can be reduced by 82% and 50% respectively.
Why aren't western beef marketers aggressively leveraging these scientific facts? Especially since they were published in scientific journals over a decade ago! Why haven't they started re-imagining beef as the healthy protein that it really is? We need a new generation of agribusiness marketers who will defend beef with both science –and audacity.