EU pig slaughterings up 7% in January

EU pig slaughterings in January totalled 23.3 million head, up 7% from the same month last year (there was an extra working day in January this year, however), the latest figures from Eurostat showed, according to AHDB Pork. Even on a per-working-day basis, slaughterings were 2% higher than year-earlier levels.

Carcase weights were also heavier year-on-year, which pushed overall pig meat production 9% higher than year-earlier levels at 2.19 million tonnes. This supports reports of ample supplies on the EU market in the new year, according to the pork division of the UK levy body Agriculture & Horticulture Development Board.

AHDB Pork noted that the higher supply level was not met by increased demand, and hence EU pig prices declined by €6 (US$7.16)/100kg during the month.

Spain was the highest contributor to the rise in EU slaughterings, with throughputs 11% higher than January 2017 at 5 million head.

The German kill rose 7% on year-earlier levels, and Polish throughputs were up 13%. However, slaughterings in Denmark and the Netherlands remained stable on the year, limiting the overall growth in throughputs. This likely reflects high live pig exports from these countries, according to AHDB Pork. 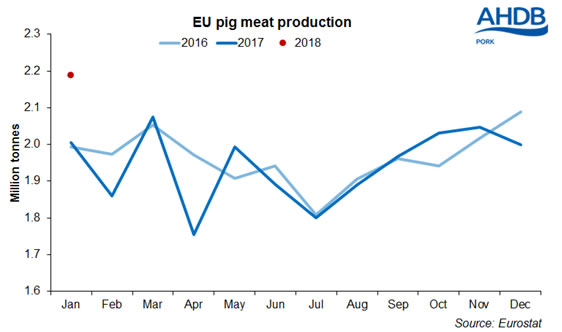