The Russian ban continues to bug Brazilian pork exports as figures showed a 16% decline during the first quarter.

The overall decline was tempered by the strong growth in shipments to China and Hong Kong, which registered an 80% year-on-year growth, at 70,400 tonnes. Pork exports to these destinations accounted for over half of the overall traded volume during the quarter. This is twice the market share of the previous year. Brazil previously accounted for over 40% of Brazil's pork export volumes.

Export growth to China and Hong Kong is likely to continue, especially given the ongoing trade dispute between China and the US. "If the 25% import tariff on US pork remains in place, there is scope for other suppliers to increase their market share. However, competing on the Chinese market may still prove difficult, as Chinese domestic pork prices are currently very low, and EU pork will also be aiming to maintain or grow market share", says AHDB Pork.

Overall, though, export growth to alternative destinations is expected to be unable to fully compensate for the loss of the Russian market throughout 2018, the pork division of the UK levy body Agriculture & Horticulture Development Board adds.

It notes that even the latest USDA forecasts anticipate Brazilian pork exports this year to be down 20% on 2017 levels.

Meanwhile, Brazilian pig prices dropped by over 20% in the first three months compared with year-earlier levels, and this is attributed to the loss of exports to Russia, which has resulted in higher supplies on the domestic market.

"While improved economic conditions may boost consumer demand, and absorb some of the additional domestic supplies, prices are likely to remain at a lower level. This, coupled to higher feed costs, means Brazilian producers are seeming to face a challenging year ahead", AHDB Pork said. 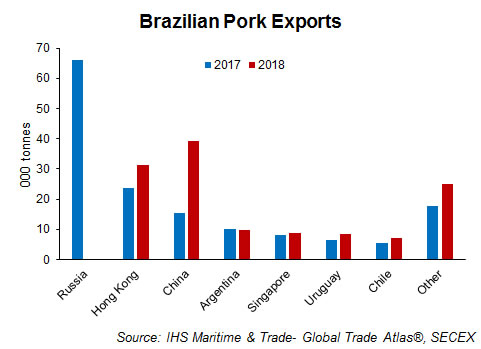