The numerator represents the total amount of antimicrobials administered in milligrams (mg) of active substance, which was applied to a certain group of animals in a defined period (denominator). The DDDA's used in this study originated from a consensus DDDA list, which was previously developed by Postma et al. [21]. All antimicrobial products licenced until December 2013 were classified according to the WHO Anatomical Therapeutic Chemical (ATCvet) system. The days at risk for each age category were defined as the time period a pig could receive an antimicrobial treatment. For breeding animals, it was set to 365 days, for suckling, weaned and fattening pigs the rearing periods of the individual herds were used. Combined TI's were calculated for breeding pigs (TI breeding pigs: sows, gilts and boars) and for pigs from birth till slaughter (TI 200days: suckling, weaned and fattening pigs). The period at risk for pigs from birth till slaughter was standardised to a 200 days period to correct for differences in ages at slaughter between herds. For the calculation of the TI 200 days, the sum of the TI suckling pigs, weaned pigs and fattening pigs was divided with the number of days for the actual rearing period and finally multiplied with 200. Thus, the comparison of AMU between the herds was facilitated. To enhance comparability uniform weights for the age categories (in kilogrammes) were applied; 2 kg for suckling pigs, 7 kg for weaned pigs, 35kg for fattening pigs, 60kg for gilts and 220kg for sows. Because of the different activity spectrum, the beta-lactams were evaluated separately in two groups: aminopenicillines and benzylpenicillines. Furthermore, graphs on the proportion of the used antimicrobial classes per age group and administration route were prepared to visualize the results.
Quantification of the biosecurity status
For assessing the biosecurity status of a herd in a standardised way, the already validated risk-based biosecurity quantification tool "Biocheck.UGent™" was used [20]. This tool calculates a score for external, internal and overall biosecurity and thus allows a comparison of the biosecurity status of herds. Both parts are divided into six subcategories, each consisting of two to 13 mainly dichotomous and trichotomous questions. For external biosecurity these are: 1. purchasing policy (e.g. pigs from same supplier, health status documented, quarantine period), 2. removing animals, manure, carcasses, 3. supply fodder, water, equipment, 4. access check (e.g. availability of hygiene lock, strict separation of dirty and clean area in hygiene lock), 5. vermin, bird control, 6. location, environment (e.g. herd located in an area with high density of pigs [average pig density at municipality level>300 pigs/km 2 ], spotting of wild boars). For internal biosecurity, these subcategories are: 1. management diseases (e.g. availability of hospital pens), 2. farrowing, suckling period (e.g. frequency of cross-fostering of suckling pigs, frequency of manipulating [vaccination, castration] suckling pigs), 3. nursery period (e.g. all-in/all-out-management, mixing of different age groups), 4. fattening period, 5. compartmentalizing, working lines, equipment and 6. cleaning, disinfection. In the system every answer has a specific weight, depending on its importance in disease prevention. In case of absence of a biosecurity measure the score will be zero whereas in the presence of specific measures a score from 0.5 to ten is given (see detailed information on the scoring system in the supplementary files by Laanen et al. [20]). The weights of the questions were subsequently defined in a score for each subcategory, for the internal and external biosecurity and a total score, consisting of both internal and external scores, each ranging from zero (total absence of any biosecurity measure) to 100 (perfect biosecurity).
Statistical analysis
Data on herd characteristics (e.g. management, technical parameters), biosecurity status, disease incidence and AMU were first managed using Excel 2010® (Microsoft Corporation). The results were analysed using descriptive statistics in SPSS Statistics (IBM SPSS 22.0, USA). For continuous variables the mean, median, minimum and maximum value and standard deviation were assessed. If continuous variables were not normally distributed a logarithmic or square root transformation was performed. In order to identify differences between low and high AMU, farms below the median TI 200days (group 1) and above the median 200days (group 2) were compared in terms of biosecurity scores using an independent sample t-Test with a significance level of 5% (p<0.05). The threshold value used to define low versus high TI 200days was the median TI 200days of all participating farms (n=60).To identify possible associations between AMU, herd characteristics, technical parameters and biosecurity status, the focus was laid on two specific predictor variables (outcome variables), namely the TI breeding pigs and the TI 200days. The variables (risk factors), which might influence AMU or were being influenced by AMU, were then tested using univariable and subsequently multivariable linear regression models. The variables with p<0.2 in the univariable model were retained for the multivariable model. To avoid multicollinearity, correlation between retained variables was assessed by means of the Pearson's two-way-correlation coefficient and if the coefficient was >0.6, only the best fitting variable was included in the multivariable model. The model was built by means of a manual stepwise backward selection procedure. During the modelling process confounding effects were evaluated by reviewing changes in parameter estimates. Additionally, residuals of the model were visually tested for homoscedasticity. All interaction between significant (p<0.05) variables in the final model were tested.
Results
Herd characteristics
The median number of sows was 300 (range 100–1510) (Table 1). The median weaning age was 25.2 days (range 19.3–32.6days) and the median number of weaned pigs per sow per year was 26.9 (range 21.1–32.2). A median of 107 breeding pigs (sows) per employee (range 50–450) was calculated. Most of the farms had a batch farrowing system of three-weeks (28/60), followed by one-week (16/60), two-weeks (10/60), four-weeks (5/60) and five-weeks (1/60). 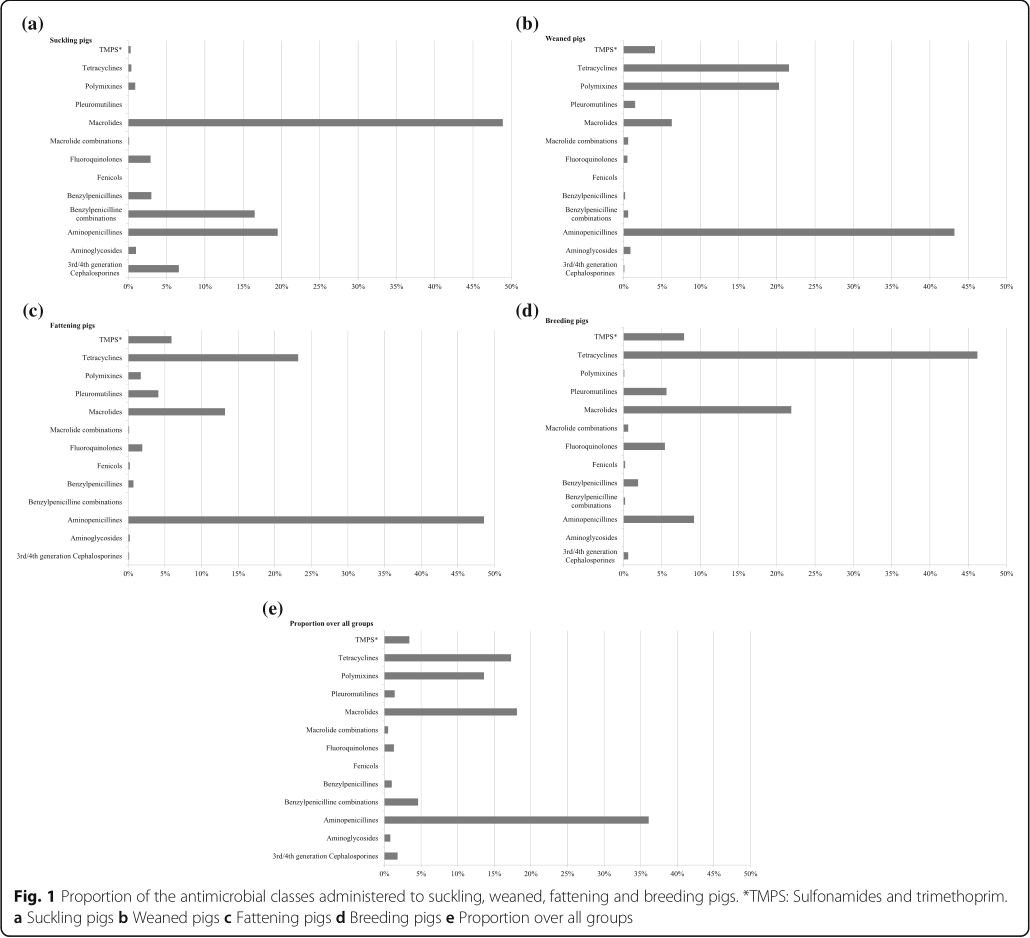 Risk factors associated to a higher antimicrobial usage
Due to a right skewedness a LOG (logarithmic) transformation of the TI breeding pigs and the number of sows was needed to fit into the regression models. For the outcome variable TI 200 days a square root transformation was performed.
Farms belonging to the group 1 (below the median TI 200 days) scored significantly better for some biosecurity practices: in the external biosecurity they had better biosecurity practices on personnel and visitors (access check: p<0.01) and were located in a more favorable region (location and environment: p<0.01) with a for example lower pig density (i.e. average pig density at municipality level>300 pigs/km 2 ). In the internal biosecurity group 1 scored significantly better in cleaning and disinfection (p<0.01) (Table 4). Moreover, the TI 200days was significantly higher in larger herds (p=0.02) (herd size expressed as the number of breeding pigs per herd) (Table 5). A lower TI 200days was associated with a higher score for external biosecurity (p=0.06). Regarding the treatment incidence of breeding pigs, two factors showing a significant effect (p<0.05) on the TI breeding pigs were retained in the multivariable model. The number of weaned pigs per sow per year (p=0.03) and the internal biosecurity (p=0.02) were positively associated with a higher treatment incidence in the breeding sows (Table 5). Herds with a higher AMU in the breeding pigs weaned more pigs per sow per year and scored better in the internal biosecurity (adjusted r 2 =0.17). 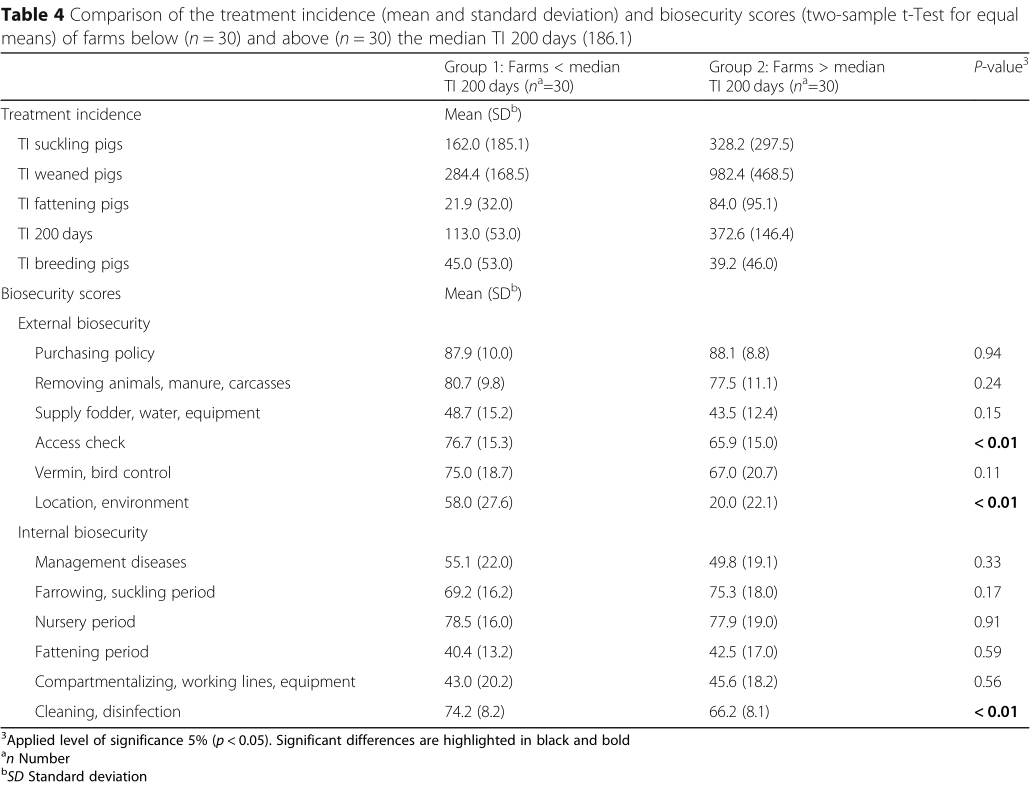 Discussion
Study design
The objective of the study was to describe the AMU in pig herds and to identify herd management and biosecurity characteristics influencing this usage. To identify risk factors associated with a higher AMU in the pig sector, our field study focussed on farrow-to-finish farms. It has to be pointed out, that in observational studies of this type (cross-sectional) the levels of usage might be subject to selection bias. The participation depended on voluntary basis and maybe these farmers were in general more interested and hence representing the better performing herds. Moreover, we have to consider, that the obtained associations are the results of a cross-sectional study, not allowing to make direct causal conclusions. The data and information collected was reviewed and checked using visual inspection and documentation to minimize recall bias.
The average herd size (number of breeding pigs) in our sampled herds was 396 (median 300) sows per herd. Nationally the average number of breeding pigs (sow, gilts and boars) per farm is 145 [22]. This suggested that our sample population represented the larger herds. Most of the herds were located in Niedersachsen and Nordrhein-Westfalen where the average pig density is >179 pigs/km 2 and>209 pigs/km 2 respectively which is above the national average (75 pigs/km 2 ) [24]. These criteria (volunteer farmers, herd size and pig density) resulted in a possible participation bias. On the other hand, the participating herds were located in regions where the majority of the German pig production takes place, suggesting that the results gave a good insight of the associations between pig production, biosecurity and AMU in German farrow-to-finish farms.
Antimicrobial usage and disease incidence
To be able to compare the differences in the AMU in an objective manner a standardised approach was needed. To interpret the amount of consumed antimicrobials it is not sufficient to rely on data on purchased antimicrobials in kilogram [14, 17]. The provision of AMU data via pharmacies or other central dispensary locations is not suitable for Germany. Due to the legal compliance the application and dispensing records provided by the farmer or veterinarian yielded reliable data on the AMU on herd level [23]. Commercial in-feed medication was not recorded and applied in the participating farms. Only very few feed mills have the manufacturing authorisation to produce commercial in-feed medication [25]. The production is complex and cost-intensive and accordingly this method to apply antimicrobials in Germany is almost obsolete [25]. Several studies investigated different methods for the quantification of antimicrobial consumption [16, 26, 27]. In this study the treatment incidence based on a DDDA which is also proposed by the ESVAC consortium was applied [16, 21, 28]. The method allows the comparison between farms, regions and countries and is based on the dose and weight of the pharmacologically active ingredient. The DDDAs used in this study were developed to quantify the amount of antimicrobials administered to the pigs. The most transparent method to establish a consensus DDDA was to take the mean of all authorized products with the same active ingredient and administration route [21]. Most of the treatments were used in the youngest animals, the suckling and weaned pigs. Particularly in these age groups a large between-farm variance has been identified. These differences of the amount of antimicrobials used in suckling and weaned pigs were also described in other countries, including Belgium and France [16–18]. Furthermore, it was suggested, that this variance between the farms was related to differences of disease incidence, management factors, biosecurity measures and socioeconomic factors, like farmers' and veterinarians' attitude [29–31]. 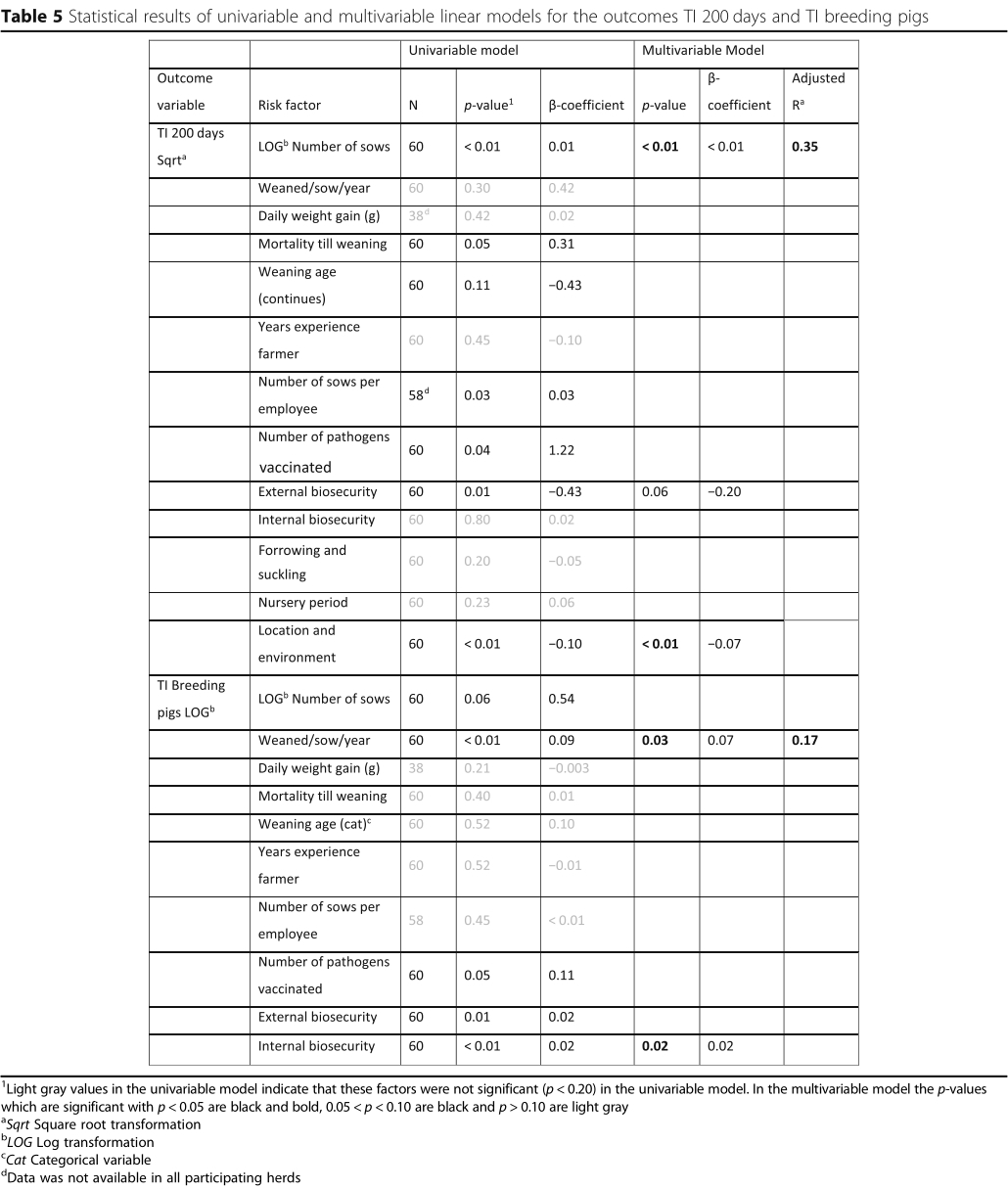 Article made possible through the contribution of S. Raasch et al.