3D approach to mycotoxin risk management in livestock and poultry

3D approach to mycotoxin risk management in livestock and poultry

Livestock and poultry feeds and its raw materials are susceptible to fungal/mold colonization. Major plant-based animal feed raw materials around the world include maize, wheat, broken rice, millets, soybean meal, sunflower meal, rapeseed meal, rice bran, wheat bran, and DDGS. Due to the shortage of conventional raw materials, many by-products are used in feed today at different levels of inclusion. Such by-products unfortunately have proven to contain higher concentrations of mycotoxins as compared to their parent grains as mycotoxins tend to concentrate on outer portion of grains. This factor coupled with long rearing period of animals make them more susceptible to mycotoxicosis.

Mycotoxicosis is a condition observed in animals upon the ingestion of different concentrations of mycotoxins in the complete feed. Mycotoxins, a diverse group of toxic secondary metabolites of fungi, are a world-wide challenge in animal industry due to the increasing globe trading of raw materials as well as climate change and changing agricultural practices. Although animals can be exposed to more than 600 different mycotoxins, most research till date has focused on six groups of mycotoxins (mentioned in the decreasing order of sensitivity); ochratoxins (OTA), T-2 toxin, aflatoxins (AF), deoxynivalenol (DON), fumonisins and zearalenone (ZEN). The emerging mycotoxins such as moniliformin, cyclopiazonic acid (CPA) are also known to cause toxicity in poultry.

Although mycotoxins affect most organs and systems in livestock and poultry, there are two systems that can be affected by many mycotoxins even at low concentrations. One is immune system and the other one being gastro-intestinal tract (GIT, gut). This paper talks about the negative effects of mycotoxins on gut and immune systems as well as "3D Approach" to manage multiple mycotoxins effectively.

Impact of mycotoxins on gut health

GIT is a system that is constantly in touch with feed-borne mycotoxins right from oral cavity all the way to large intestine. As a result, GIT is particularly affected by mycotoxin. Generally, intestinal barrier in the GIT functions as a filter against harmful mycotoxins. However, some mycotoxins have been found to exert their detrimental effects in the GIT. For example, mycotoxins can alter the normal intestinal functions such as barrier function and nutrient absorption. Some mycotoxins also affect the histomorphology of intestine. As the feed gets digested at different levels of GIT, mycotoxins get released into the intestinal lumen and subsequently absorbed into blood circulation. From blood circulation mycotoxins reach liver and various other organs resulting in toxicity. To prevent toxicity, a sound gut health is critical. Table 1 shows different ways in which mycotoxins can compromise gut health. 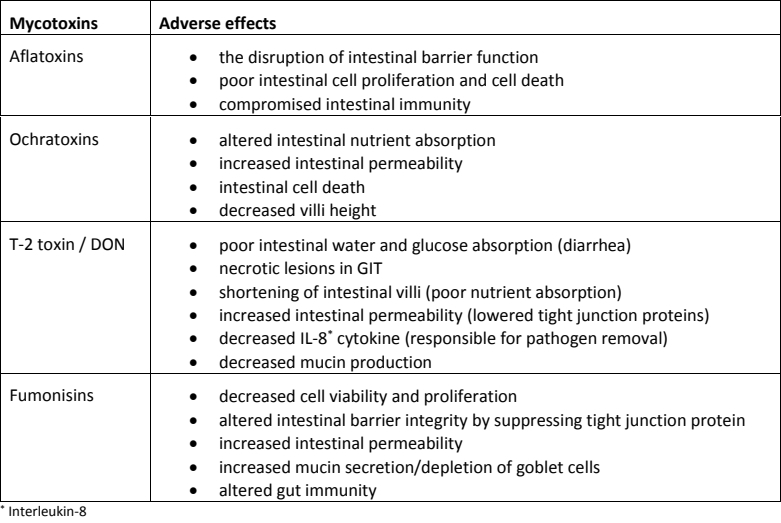 Impact of mycotoxins on immunity

The most under rated negative effects of mycotoxins in animals are on their immune system. The immune system is broadly classified into innate (macrophages/dendritic cells), cell-mediated (DTH, cytotoxic T cells) and antibody-mediated (B cells, T helper cells, antibodies). Mycotoxins are known to affect all these arms of immune system and subsequently making animals more susceptible to various bacterial, viral and protozoan infections. Table 2 provides how mycotoxins affect immunity of animals.

As it can be seen clearly in Table 1 and Table 2, all the key mycotoxins have significant negative effects on gut integrity and immunity in addition to affecting the performance. Although inorganic adsorbents such as bentonites can effectively bind aflatoxins, ergot toxins and bacterial (endo) toxins in intestine, they only have moderate binding to T-2 toxin, ZEA and OTA. DON and fumonisins are not easy to bind. Mere mycotoxin binding strategy, hence, may not help in protecting the birds and there is a need for ingredients capable of improving immune and gut health. On top of this, animal feed is usually contaminated with multiple mycotoxins and producers are looking for a broad-spectrum solution to safeguard their business.

in vivo Validation Proof for Toxo-XL

TOXO-XL has been validated through various established in vivo models, with the collaboration between Trouw Nutrition and independent scientific partners. Most recently, a trial was conducted at Department of Animal Nutrition and Feed Science, College of Animal Science and Technology, Huazhong Agricultural University (Wuhan, Hubei, China). In this trial, 26-week-old Roman laying hens were enrolled and randomly allocated into five experimental groups.

The trial results showed that after a 12-week exposure to mycotoxins, there was a significant reduction in egg-laying rate from 90.6 to 85.8% (p<0.05; data not shown) and TOXO-XL inclusion improved egg-laying rate significantly to 88.8% (p<0.05). Mycotoxin contamination increased FCR from 2.18 to 2.26. TOXO-XL inclusion was able to reduce this ratio back to 2.18, while for two other products FCR ended at 2.29 and 2.27. The return on investment (ROI) for TOXO-XL inclusion was positive and reached 3.9:1, while for both benchmarks' ROI were negative.

Latest research on mycotoxins in livestock and poultry has shown that both gut health and immunity are significantly compromised by multiple mycotoxins. Research over last few decades has also shown that mycotoxin binding alone is not sufficient to manage multiple mycotoxin risk in animals. Mycotoxin Risk Management strategy combining mycotoxin binding concept along with means of improving gut health and immunity are of paramount importance in not only enhancing animal health and performance but also improving the bottom line of business operations.

Video >
Technical Paper >
What poultry producers should know about endotoxins
Effective endotoxin management is a crucial task for poultry producers, allowing them to safeguard their animals' health and productivity. In this second part of our two-part s ...
Mycotoxins in poultry: A hidden factor affecting flock health
The immune system is constantly under siege by different stressors. Stress, whether from disease or environmental factors, plays a critical role in the overall health and well-bein ...
Immunomodulatory effects of heat stress and lipopolysaccharide on the bursal transcriptome in two distinct chicken lines
Transcriptome analysis identified genes and pathways involved in bursal responses to heat stress and LPS and elucidated that these effects were greatest in the combined treatment. ...