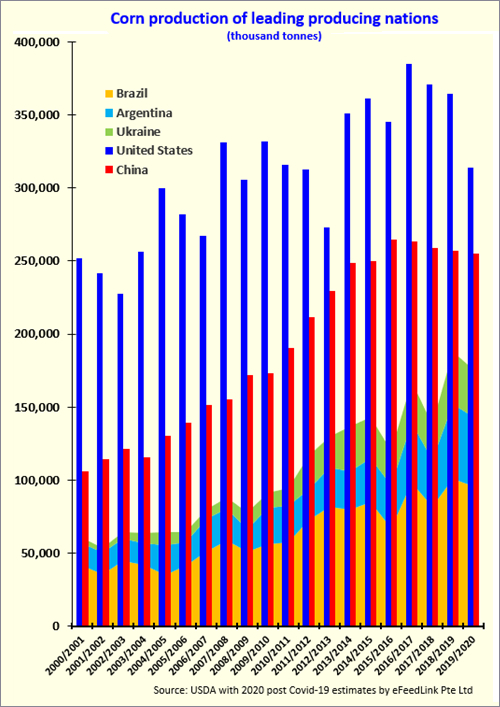 Before the Black Swan event of uncontrollable SARS-CoV-2 outbreaks, the corn market was following a classic recovery path seen during late commodity bear market phases: Gradually declining inventories, with each price cycle bottoming out slightly higher than the previous one over several consecutive years.
Covid-19 disrupted corn's market recovery path, transforming even factors that once provided solid market support into deflationary forces. Overnight, biofuel markets that once made corn outperform soybeans were transformed into strong deflationary headwinds.
By any measure, the corn market has gone off the rails. While more deflation might be on the way, corn is now in a bizarre zone of highly risky, two-way price volatility rarely seen. Radical market shifts and deep uncertainty forces us to push the Nobel prize-winning economic concept of "rational expectations" out of academia and into the Real World.
Interestingly, the attached price graph shows that even before coronavirus emerged, corn's cyclical upturn had wavered: Rather than forming noticeably higher price bottoms with each market cycle, corn's cyclical lows in Q3 2018, Q2 2019 and Q3 2019 formed a nearly flat base, as if they were anticipating an unforeseeable market shock.
Covid-19's demand shock was transmitted via ethanol; a factor that previously was either inflationary or neutral, but never deflationary. Most of the time, corn nominally responds to energy market fluctuations. It only strongly reacts to ethanol when oil market volatility is high –and it hasn't been this high for nearly five decades.
Record high soybean stocks meant that before coronavirus, corn's outlook was significantly more bullish than that of beans, causing farmers to shift planting intentions toward the golden grain. The USDA's March 30th report was based on farmer surveys conducted in late February and early March –when the market outlook was far more optimistic. It estimates 2020 corn planted area at 97.0million acres, up 8% or 7.3 million acres more than 2019's 89.7 million acres.

Even if 10% of these planting intentions are abandoned, with the USDA projecting a 178 bushels/acre yield, that would make for a bloated 2020 harvest of approximately 400 million tonnes –but that supply-side assumption does not take Covid-19's impact on corn demand.
At the time this planted acreage survey was taken, farmers assumed that the proportion of US corn turned into ethanol roughly equaled the proportion milled into livestock feed. –Suddenly and without warning, this is no longer be the case.
Peaking at slightly over 140 million tonnes or 40% of America's annual corn harvest in the mid to late 2010s, falling oil prices trimmed the quantity of US corn used for making ethanol to a USDA estimated 137.8 million tonnes by early 2020. Coincidentally, the years 2016 through 2019 saw once rapidly rising ethanol output level off into an undulating 1.0 to 1.2 million barrels/day plateau.
That left the USDA's April WASDE report with ethanol distilling corn procurements of 128.3 million tonnes and feed corn consumption at 144 million tonnes –the first time since 2015 that livestock consumed significantly more corn than ethanol. --But 2020's ethanol production volume now projected to total 30% to 50% less than what was assumed a few weeks ago. Consequently, the USDA's April corn market projections were dead on arrival.
With state-wide lockdowns idling America's cars during the peak US driving season, the quantity of corn transformed into ethanol is poised to fall into the 70 to 90 million tonne range. This will be the lowest volume of corn fermented into ethanol since the late 2000s. The first time it fell below 100 million tonnes since 2009 –and it will break an unripe, three year downtrend in corn inventories.
More importantly, world corn stocks minus China's protected markets will easily eclipse their previous 119.1 million tonne record. Instead of falling to 98.3 million tonnes with a stocks-to-use ratio of  11.5% assumed in March's USDA report, we are thrown into the unknown territory that economists call "rational expectations": Sudden, radical changes in corn's forecasted price, supply and demand forces market players to change their behavior –and this will induce new, possibly counterbalancing revisions to the radically changed forecast itself.
Before taking into rational expectations into account, America's ethanol output downturn implies that instead of a USDA forecasted six million tonnes, closing 2019-20 world corn inventories are on track to jump by 50 to 75 million tonnes and rise into the 350 to 375 million tonne range, easily breaking their 351.96 million tonnes all-time high set in 2016-17.
Similarly, instead of the USDA's six million tonne increase to 104.1 million tonnes, corn inventories outside China are poised to close in the 150 to 160 million range, with a stocks-to-use ratio near 22% --but all this is before we adjust the USDA's figures for how corn growers, livestock farmers, ethanol makers, and vehicle owners adjust to these new circumstances, which are themselves to rapidly change. 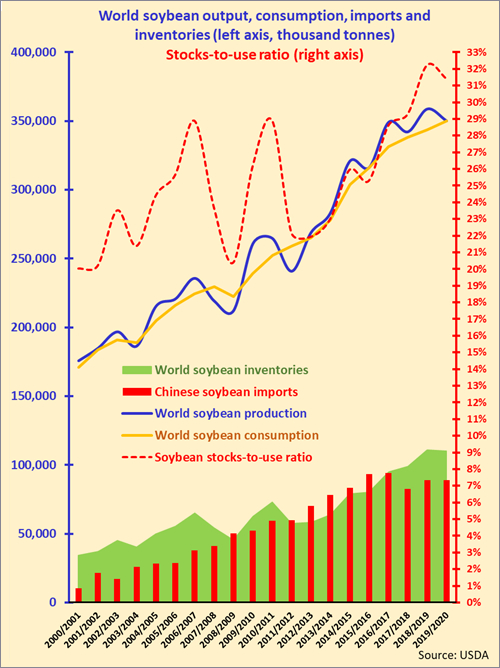 When the USDA last surveyed corn planting intentions, farmers assumed a price band of US$3.70/bushel to US$4.20/bushel. Before many farmers could even seed their fields, corn plunged to as low as US$3.16/bushel, due to an oil futures contract that traded at extremely low levels for technical reasons.
It has since rebounded 4.1% to near US$3.29/bushel in just a few days. Even so, upward momentum is severely limited by the above-described ethanol demand destruction. Over the short-term, we will probably see an exceptional market rarity: Thanks to the impact of coronavirus, corn will probably tread water in a new price bottom below its last three bottoms, which were in the US$3.40/bushel to US$3.60/bushel price range.
Over the medium term, many observers wonder if corn will fall belowUS$3.00/bushel; something it has not done since the early 2000s. Based on USDA corn planting and the more recent ethanol production downturn, a breaking of the US$3.00/bushel barrier can only be prevented by catastrophically bad weather –or if farmers rationally reduce their corn planting intentions -but that's before we take the rational behavior of US farmers into account.
Current prices are near and in some cases, below the break-even point for a significant proportion of US grain farmers. It will motivate many of them to consider changing their planting intentions. Nor is that the only factor that will make some farmers revise their planting intentions.
From late March through mid-April, corn fell 9.3% in price. Unaffected by US biofuel consumption trends, beans only dropped 5.9% from their late March peak of US$8.88/bushel, bottoming out In the third week of April near US$8.36/bushel, before recovering to US$8.48/bushel at the time of this article's publication.
Soy's stronger performance was followed even more bullish news: China's surprised the market by purchasing six US soybean cargoes, even though Brazilian beans were selling at a sizable discount. This is a clear indication that Beijing ordered China's importers to step up their US bean purchases for political reasons; namely to satisfy their Phase 1 US-China trade deal requirements.
Unless the US-China trade war re-ignites, this gives farmers who can't make a profit with corn below US$3.50/bushel that by shifting their acreage to beans, their crop will have a buyer.
Our conclusions below must be qualified by the following: Many unforeseen events have happened. If more market shocks happen, they could make both this forecast and the adaptive behavior of market players irrelevant.
For now, with ethanol driving overall feed crop market deflation, we see US farmers cutting back corn planted acreage to around 70 million acres, with possible harvested area falling up to five million acres below this total. The reductions will be greatest in marginally profitable areas outside the corn belt or near its periphery. Assuming the USDA's 178bushel/acre yield estimate holds, this would produce a US corn harvest of 300 million to 320 million tonnes –the smallest since 2012's drought.
By limiting the rise in closing stocks from the previous marketing year's 56 million tonnes to 66 million tonnes or less, it will keep the rise in world corn inventories to under 10 million tonnes –not the catastrophic 50 to 70 million tonne rise one would assume if farmers were not capable of adjusting their crop size to new market realities.
Going beyond this marketing year, we can expect Latin American growers to reduce both their corn and soybean plantings, allowing both their inventories to resume down-trending from 2021 onwards.
For now, we can expect rational, loss-averse behavior on the part of US farmers to reduce corn acreage by enough to keep inventories roughly stable, from 56 million tonnes last year to somewhere between 51 and 59 million tonnes this year. That, in turn, will keep world corn inventories roughly constant at their current levels near 300 million tonnes, or 98 million tonnes excluding China.

Once the reduced corn planting intentions become evident, the market will know that despite the ethanol crash, the world did not end. It will keep US corn inventories within +10/-10% of the closing 2018-19 level of 56 million tonnes. That should keep corn prices solidly above the $3 barrier, most likely around US$3.60/bushel to US$3.90/bushel in the latter half of this year.
When combined with smaller, deflation driven acreage reductions in China and other nations, America's projected 50 million tonne drop in corn production will cause 2018-19 global output to come in below its 1.13 million tonne USDA estimate. Instead, from 1.124 milliontonnes in 2018-10, we anticipate that our current 2019-20 will see global corn output fall 4.4%, to 1.075 million tonnes.
Not all the reduced corn acreage would go to beans; some will go to other crop lines –but enough will to put this year's bean harvest in the 105 to 110 million tonnes range –far more than the 96 million tonnes assumed by the USDA before ethanol nosedived.
On one hand, China's buying a majority of its 2020 imports from the United States (even if they cost more) will boost market confidence. That will keep CBOT soybeans 10% higher (and close to US$9.00/bushel) than if Beijing opted to an identical quantity of beans from Brazil.
On the other hand, it means that instead of slipping to 100 million tonnes as projected, the partial shifting of planted acreage from corn to beans will keep closing 2019-20 inventories stuck at 110 million tonnes.
Beyond this year's harvest, as the world (we hope) returns to business as usual, a spell of low corn and soybean prices should keep the inventories of both these feed crops on a downtrend lasting into the middle of this decade.