Intra-EU trade in pork declined in 2016

Despite pork production increasing to 23.2 million tonnes, the volume of pork traded among the 28 EU member states declined in 2016, AHDB Pork reported.

The pork division of the UK Agriculture & Horticulture Development Board said that although the extent of the decline is unclear due to inconsistencies in the data from different countries, the directionality was clear: import figures showed a 2% decline in the amount traded while export figures showed a greater fall of 4%. "Regardless, trade in pork within the EU still accounted for almost a quarter of production", it said.

The decline in intra-EU trade in the face of higher overall production was partly influenced by the one-third growth in shipments to non-EU markets in 2016. Shipments to China, in particular, sharply increased by 86% last year to 990,000 tonnes. At the same time, consumer demand for pig meat within the EU declined, AHDB Pork said.

The majority of the key EU exporters posted a drop in shipments to fellow member states. Germany remained the largest supplier, although volumes were back 2% compared with 2015. Spain bucked the general trend and saw EU exports growing 4% year-on-year. This reflects the 5% increase in domestic production and efforts of Spanish exporters to penetrate other EU markets.

On the import side, most key nations followed the declining trend. Italy, the largest pork importer within the EU, reported a 5% fall, following reports of declining consumption and an increase in domestic production.

This year, supplies for export within the EU are likely to be limited following previous declines in the breeding herd. Expect, therefore, to have less pork traded on the EU market in 2017. This could be accentuated by continuing slack consumer demand within the EU and further growth in the Chinese market, where export demand is expected to grow 20% in 2017, based on the latest forecasts from the USDA Beijing attaché. 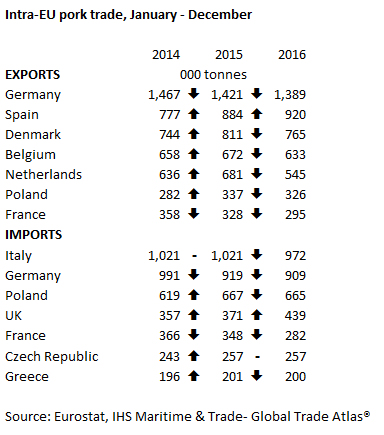