Fusarium and Aspergillus mycotoxins are often considered the most common and critical mycotoxins in grains and feed. However, Alternaria fungi, where the most predominant is A. alternata, have also a large presence in wheat, sorghum and barley, and have also been reported to occur in oilseeds such as sunflower and rapeseed, tomato, apples, citrus fruits, olives and several other fruits and vegetables (EFSA, 2011). Furthermore, some recent feed surveys pointed out the massive detection of Alternaria mycotoxins in feed and evoked increased attention to them in the last few years (Novak et al., 2019; Koshal et al., 2019). Alternaria species produce more than 70 phytotoxins and some of them have been chemically characterized as mycotoxins to animals. The most important Alternaria mycotoxins due to their harmful effects are alternariol, alternariol monomethyl ether and tenuazonic acid (Ostry, 2008) (Figure 1). These Alternaria mycotoxins are described to induce harmful effects in animals including fetotoxic and teratogenic effects. Alternaria mycotoxins are also well known to have estrogenic activity, thus, some Alternaria mycotoxins and several phase I and II metabolites of them are able to bind and activate estrogenic receptors because they act as mimetic of 17-β-estradiol (Lehmann et al., 2006; Dellafiora et al., 2018). Hence, due to their possible harmful effects, Alternaria toxins are of concern for animal health and performance. But, although Alternaria toxins have a significant toxicity, relevant in vivo toxicological data are scarcely available.

Feed surveys helped to identify tenuazonic acid as a big threat for livestock as they detected the large incidence and concentration of it in feed. Nonetheless, feed surveys are not able to elucidate the real mycotoxin exposure specifically for each farm. Recent analytical advances allowed to develop methods to determine mycotoxin biomarkers in blood and they rapidly have been proposed as the successful method to assess the exposure to mycotoxins, specifically for each farm. Thus, Innovad, applying Myco-Marker® service, collected 200 blood samples using FTA cards from Asian farms to elucidate the real mycotoxin exposure. Thirty-six (36) different mycotoxin biomarkers were analysed per sample to determine the real mycotoxins risk and not just the four typical studied mycotoxins (deoxynivalenol, aflatoxin, zearalenone and fumonisins). Surprisingly, blood analyses allowed to see that tenuazonic acid was the most frequent mycotoxin detected in blood. Thus, tenuazonic acid was detected in blood samples from 42% of the studied farms. Although, tenuazonic acid was more detected in blood from swine (60%), it was also persistent in poultry farms (33%). In addition, some worrying concentrations were detected, for instance, a maximum concentration of 100 ng of tenuazonic acid /mL in blood from pig was detected. The tenuazonic acid concentrations quantified in blood indicated specifically moderate/high threat for some farms (~30%) when risk level was established after using toxicokinetic data (Fraeyman et al., 2015). Noteworthy, another Alternaria mycotoxin, alternariol monomethyl ether, was also detected in blood samples. So, obtained results permitted to identify the large exposure of livestock to Alternaria mycotoxins, with tenuazonic acid as the principal threat, specifically for each farm. Moreover, analyses revealed that animals were always exposed to three or more mycotoxins in all studied farms from Asia (Figure 2) and this is of concern as co-exposure to other mycotoxins have a synergistic or additive negative toxic effect. These results are, without a doubt, demonstrating that mycotoxin control strategies cannot be only focused in the main four mycotoxins (zearalenone, deoxynivalenol, fumonisins and ochratoxin A), other commonly no controlled mycotoxins as tenuazonic acid or other emerging mycotoxins, as beauvericin or enniatins, can represent a greater threat than the main four mycotoxins. This means that real mycotoxin impact can not be totally known if the most frequent mycotoxins as tenuazonic acid or emerging mycotoxins are not controlled. For this reason, it is important to control the real mycotoxin levels to optimize mitigation strategies to reduce mycotoxins impact and improve animal performance. 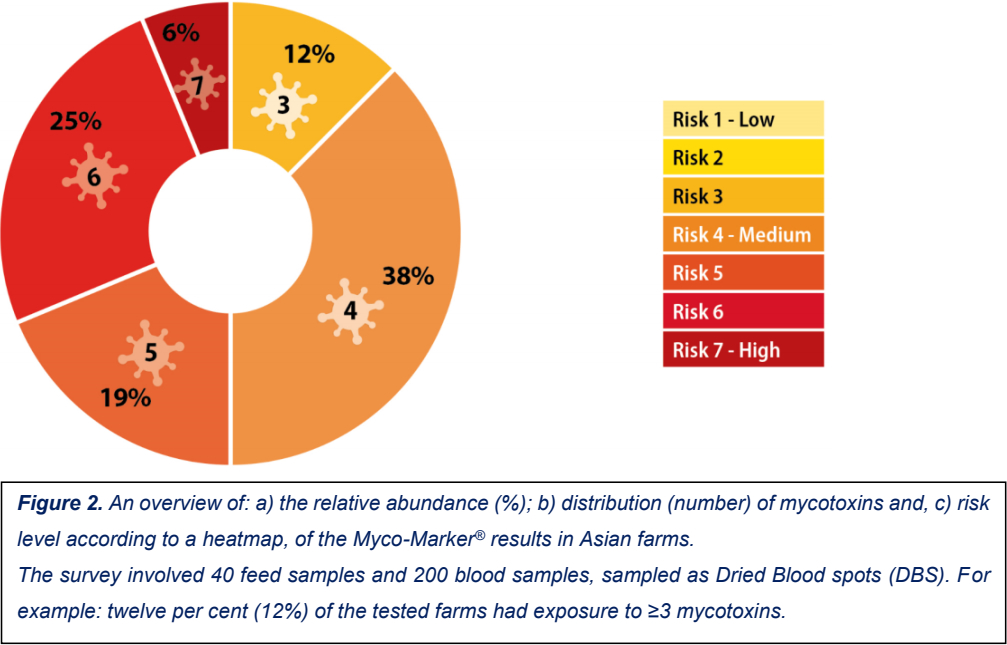 Article made possible through the contribution of Innovad