Although 2014 turned out better than was expected for Australian beef cattle, this year is seeing the industry pay the price for an expansion based on unsustainable supply-side fundamentals.
Thanks to a low Australian dollar and scarce US supplies, Meat and Livestock Australia (MLA) reports January and February beef export volumes where 19% above their five year average for these two months. Unfortunately, with 2015 cattle slaughter falling a USDA estimated 15% amid depleted inventories, Australia will not be able to take full advantage of high international demand for its beef.
Excessive slaughter, animal exports limit 2015 prospects 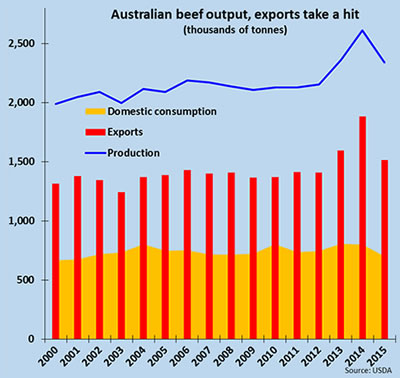 Last year, northern Australia's drought encouraged the culling of beef cattle herds. Severely impacting leading cattle raising state Queensland, this dry spell coincided with record export prices for beef, high prices for live cattle and a crashing world dairy market. The latter motivated a slaughter of aging, less productive cows in the country's southern dairy producing regions.
Alongside boosting slaughter rates, high animal prices encouraged the export of live cattle, particularly to Indonesia, which re-liberalized Australian imports after a trade dispute some years earlier. As a result, live cattle exports surged by a whopping 52.8%, from 813,000 head in 2013 to 1.30 million head last year.
The impressive performance was driven by a tripling of cattle exports to Indonesia over three years. From 280,000 in 2012 when import restrictions were imposed, to 450,000 live cattle in 2013 when imports were liberalized late in the year, and 720,000 head in 2014.
With rising personal incomes boosting Chinese and Southeast Asian beef demand, even more explosive growth occurred in cattle exports to Vietnam. It went from buying less than 2,000 live Australian beef cattle in 2012 to 80,000 head in 2013 and approximately 190,000 head last year. China similarly increased its 2014 Australian live cattle imports to 108,000 head, from approximately 80,000 the previous year.
The rise in beef demand from developing Asian countries can also be seen in the relative performance of beef export classes. On one hand, exports of grain-fed beef, which are bought by mature, slow growing markets like Japan and South Korea, increased only 10%. On the other hand, shipments of beef from grass-fed, northern cattle jumped destined for China, Southeast Asia or US burger chains, jumped by over 22%.
With an unexpectedly high proportion of animals being slaughtered or shipped abroad, projected beef's output, beef exports and cattle exports were all revised upward. With American cattle numbers falling to lows not seen since the mid-20th century, the US economic recovery's demand for ground beef caused exports to that country to jump 73%, from 211,000 tonnes in 2013 to 395,000 tonnes last year –90% of which was ground beef.
Unfortunately, much like the above mentioned high cattle slaughter rates within Australia itself, 2014's excessive live cattle exports are now forcing a curtailment of this year's animal inventories, beef production, beef exports and even live cattle exports themselves. The latter are falling by 31% this year
Moreover, the proportion of females slaughtered, which normally hovers in the 45% to 47% range, peaked at over 50% for much of last year. With an unusually high proportion of females slaughtered, the expectation that high beef prices would motivate an expansion of Australian herds has been dashed. Instead of rising from 9.56 to 9.70 million head this year as expected, 2015 calf replenishment will only total 9.4 million head, a 1.7% drop from 2014 levels.
As a result, after rising 1% to 29.29 million head in early 2014, Australian cattle inventories fell to 27.6 million and are expected to close out this year at 27.43 million head, down 6.3% in two years. But with so many cattle shipped to East Asia, their slaughter will boost Indonesian, Vietnamese and Chinese beef production at Australia's expense.
Plunging output, exports, inventories
Consequently, because a large proportion of the inventory drop was due to animals that will not be slaughtered in Australia itself, beef production will fall significantly faster than the total number of cattle. Moreover, with unusually few female cattle left, to rebuild herds, slaughter will have to fall from 10 million head to 8.65 million.
The resulting 13.5% drop in slaughter rates is more than two times the actual drop in cattle inventories themselves. The large drop in cattle slaughter is further augmented by a projected rise in finishing weights. Consequently, from a USDA estimated 2.60 million tonnes in 2014, the initial 2015 projection of 2.34 million tonnes output has been revised downward to 2.20 million tonnes, down a whopping 15.3% on-year. 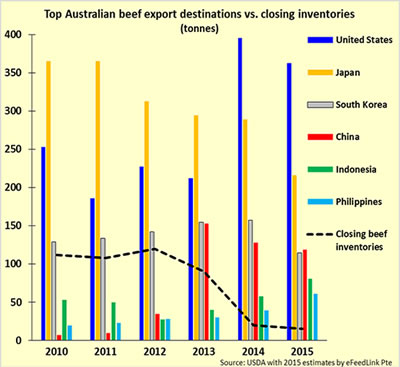 Such a decline also cannot help but dent exports too. Previously, amid relatively flat domestic consumption and rising cattle numbers, beef exports jumped by 13.2% and 18.0% in 2013 and 2014 respectively.
But when exports peaked at a record 1.880 million tonnes in 2014, to exceed the initial USDA forecast of 1.775 million tonnes by 113,000 tonnes, only 23,000 tonnes of additional beef came from domestic cattle slaughter. Another 17,000 tonnes of beef was freed up for export by lower than expected domestic consumption. The other 73,000 tonnes of additional exports came from inventories, which plunged a whopping 81%, from 90,000 tonnes to 17,000 tonnes.
With 2015's culled herd forcing a 15.3% reduction in beef production and inventories at rock-bottom levels, there is no way an estimated 19.4% decline in export to 1.515 million tonnes can be avoided. Hence, Australian beef's medium term outlook is, to say the least, constrained.
...But the future is bright
The good news is that the industry has much brighter long-term prospects. With the rains returning to Queensland, beef prices staying high and feed costs falling lower, fat profit margins are already encouraging a rebuilding of herds. As the slowest growing livestock line, the turnaround in Australia's beef production will take time, but will most likely enter a high demand world market.
With China's beef demand having grown exponentially, 2014 saw it become the third largest importer of the country's live cattle. Towards this end, a new China-Australia free trade agreement will commence in late 2015 and result in a gradual removal of the current 10% tariff on live cattle by 2019. It will also further boost Australia's beef exports to China, which grew by several thousand percent over five years even before this agreement was signed.
To complement its booming live cattle exports to Vietnam, November 2014 saw Australia being granted permission to export feeder and slaughter cattle into Thailand with no tariffs. Integrators estimated that Australia's live cattle exports to Thailand could exceed 30,000 head within two years.
In northern Asia, a new free trade agreement with Japan will cut tariffs on its exports of frozen and chilled beef to that country from the current 38.5% to 19.5% percent and 23.5% percent respectively by 2030. Japan also immediately slashed tariffs on live cattle imports from Australia by 20% and abolished all existing volume restrictions.
No leading beef producer is located closer to East Asia's fast growing economies and these new trade liberalization agreements merely compliment Australia's natural advantage in supplying this region.  Provided Queensland continues receiving adequate rainfall, Australia's recovering cattle herds should be able to take full advantage of the world's fastest growing markets for red meat.