eNewsletter
March 31, 2015
Soya beans, soya meal and palm: An emerging oversupply of oilseeds
Although soymeal shortages delayed the inevitable market adjustment, a catching up of soy harvests with demand exposes an oilseed glut that had been gathering pace for a decade.
By Eric J. BROOKS
An eFeedLink Exclusive Commentary
Unless North America has unusually, rare instance of bad weather, the world at this time is facing a glut of oilseed based feed crops. Currently trading near US$9.70/bushel, soy, the oilseed market's bellwether indicator, is down by 46% from its US$17.94/bushel peak in late 2012. It fell 33% in the last year alone, as record crops in Brazil and particularly the US, pushed world inventories to near 90 million tonnes and 113 days of consumption.
Soymeal supply constraint delays  --but cannot stop-- market adjustment
Even so, some would say this is overdue, as they thought the move below US$10/bushel should have occurred late last year, rather in the first quarter of 2015, when it spent most of January and February above US$10/bushel. According to Emily French, founder and president of CosiliAgra, while most world soy crop growing-for-export capacity is in Brazil and America, their growing domestic soymeal demand, especially in Brazil, is leaving less of it available for export.

At the same time, political problems in third-ranked soybean exporter Argentina have depressed its export-driven soymeal crushing capacity utilization from above 90% three years ago to slightly below 70% during most of 2014, when the country's debt default motivated a holding back of exports in hope of achieving higher foreign exchange earnings. In China too, thin crushing margins depressed output, leaving less soymeal available for export.
At the same time however, large crushing overcapacity with low returns in Argentina and China means there is no incentive for Brazil or the United States to build more crushing plants, even if they hold most of the world's soy exports.
India, Argentina inflate meal/bean price ratio
The resulting oversupply of soy but under-crushing of soymeal can be seen in the relative price ratio between these two inter-related commodities: From 77% in April 2011, the soymeal:soybean price ratio rose into the 90% in early 2013, when India's soymeal demand left less of its domestic supplies available for export. With Indian soymeal capacity answering to the demands of its booming poultry and dairy sectors, its domestic soymeal consumption quadrupled from 2004 to 2014. As a result, Indian soymeal exports fell from 4.4 million tonnes in 2012/13 to 2.1 million tonnes in 2014-15. 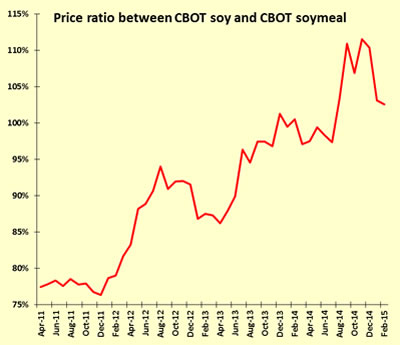 Then, on the heels of India's soymeal contribution to the world market falling by 50%, July 2014's Argentine debt default resulted in depressed soymeal crushing rates and the holding back of exports, in case their value in US dollars appreciated. Within a month of Argentina's soymeal crushing downturn, the soymeal:soybeans price ratio climbed above 100%, staying in the 105% to 115% range from September through to January.
The dichotomy between soymeal and soya bean prices can also be seen in the behavior of their inventories: Totaling almost 90 million tonnes, world soy inventories have broken their old record, and stand 126% above previous all-time high set in 2010-11. World soymeal inventories, by comparison have only started to recover: At 3.55 million tonnes, they amount to 86% of their all-time high of 4.1 million tonnes, which was set in 2006-07 and equaled in 2010-11, even though world soymeal demand has increased significantly since then.
According to French, the mismatch between bloated soya bean inventories and relative shortfall of exportable soymeal kept world soybean prices about 10% higher than they would otherwise have been over the past three quarters. -And this price floor in turn supported markets for other oilseeds and their feed crop derivatives, keeping them more costly than they would have otherwise have been. This situation, is now ending:
Towards the end of the first quarter however, all indications were that Argentina's soymeal production was rebounding. As a result, after falling far less than soya beans in price, the last six weeks have seen CBOT soymeal's price drop exceed that of CBOT soybeans. Consequently, going into April, the soymeal:soybean price ratio was near 95%, with considerable scope for more downtrending.
With soymeal's gradual supply re-emergence, more than just raw soya bean prices are effected. As soya beans descend towards their market balancing price, their bloated inventories intersect with even larger oversupply issues in other parts of the oilseed complex.
Soy abundance, palm oversupply coincide
During the 2000s, palm oil output grew rapidly, overtaking the production of soy oil, and creating a ready supply of palm kernel meal, which has become an increasingly important input for the dairy industry.  For most of that time, neither palm nor soy's fundamentals suffered: While palm supplies grew faster than demand, soy fell behind oilseed consumption growth, creating a situation where the former was substituted in place of the latter.
But while palm oil and palm kernel meal were welcomed when soy was in short supply, amid record inventories of soya beans, rebounding soy supplies and an abundance of rapeseed and its derivatives, this is no longer the case.
Responsible for over 90% of 2014 palm oil exports and producing ten times more than the next largest producer, Malaysia and Indonesia collectively drive the world palm oil market. At this time however, a combination of market signals, weather and policy changes is inducing them to level off their supply growth -but long after inventories have been overbuilt.
Over the medium term, from its secular peak of US$860/tonne in March 2014, palm oil fell a steep 32% in one year and was trading around US$585/tonne in late March. Late last year, the flooding of 184,000 hectares of Malaysian palm plantations offset a 3.6% rise in cultivated area. With floods cutting this year's crop yields, 2014-15 Malaysian palm oil output will level off, falling a nominal 0.8%, back to 20 million tonnes.
Although 2014-15 exports rose 3.8%, from 17.34 to 18.0 million tonnes, along with this year's nominally smaller crop, competition from both cheapening soymeal and Indonesian palm is expected to make 2014-15 Malaysian palm oil export volumes taper off 0.55%, to 17.9 million tonnes.
Biodiesel cannot forestall inventory rise
Although Malaysia's domestic human consumption and feed use of palm oil is has stayed flat in the 680 to 690 tonne range since 2012 and will stay in this range into 2015-16, there is a new source of domestic demand: With the government new B10 biodiesel standard, 2014-15's oil price crash induced 2.3% fall in biodiesel production will turn into a healthy, 7% increase in 2015-16. The 2.15 million tonnes of Malaysian palm oil converted to biodiesel in 2015-16 also represents a record high 11% of its projected harvest.
But rising Malaysian biofuel output cannot make up for flat domestic consumption and faltering exports. As a result, inventories will rise 8%, from 2.0 to 2.16 million tonnes. Rarely rising above 1.5 million tonnes before the late 2000s, it will be the fifth inventory closeout above 2 million tonnes in six years, and roughly equals 2010's record level.
Malaysia's palm oversupply however, is not faring badly compared to what Indonesia must contend with. Fuelled by government subsidies and record palm prices in the late 2000s Indonesian, harvested palm acreage jumped from 147% in fifteen years, from 3.7 million hectares in 2001 to a USDA estimated 8.9 million acres by early 2016. 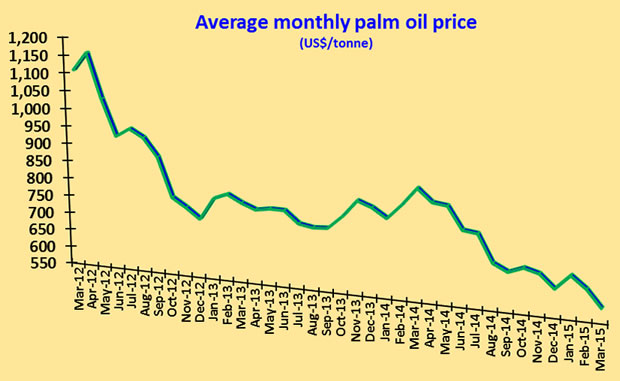 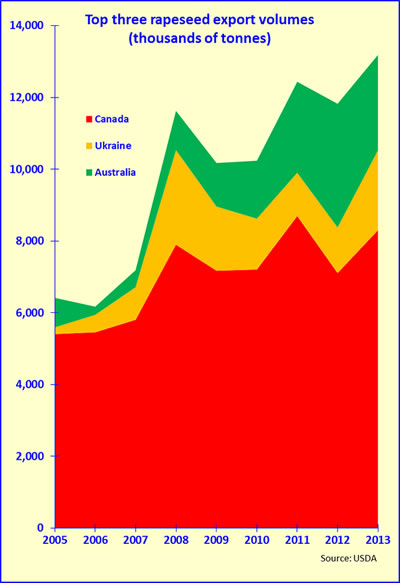 Although the last year saw planting intentions fall off sharply, a decade of acreage expansion and yield increases that outraced demand cannot be easily undone: Since 2007, output has increased by roughly 10% annually, much faster than world demand. In fact, amid decelerating feed demand growth and rebounding soy supplies, world palm oil consumption growth has decelerated greatly over this time.
Although Indonesia's government also encourages biodiesel production, it comes in the form of a financial subsidy, rather than a minimum biofuel content mandate as is the case in Malaysia. Although the government more than doubled Indonesia's palm oil biofuel conversion subsidy from Rp1,500/liter  (US0.12/liter) to Rp4,000 (US$0.30/liter), with oil's price crashing, it is failing to boost biodiesel production by an amount sufficient to prevent a large inventory increase.
Starting from a low base of 0.1 kiloliters in 2006, biofuel production grew rapidly but flattened out at 5.8 kiloliters for the last two years. Although the increased subsidization is expected to make it increase a healthy 20.6% to 7 million kiloliters that will not be nearly enough to absorb the emerging Indonesian palm oil glut.
With projected 2015-16 output rising by 2 million tonnes or 6.1% to 35 million tonnes, exports are increasing a mere 0.2 million tonnes, to 22.7 million. The large biofuel production increase and higher feed, industrial and human consumption only boost domestic demand up by 0.6 million tonnes, to 10.92 million tonnes. 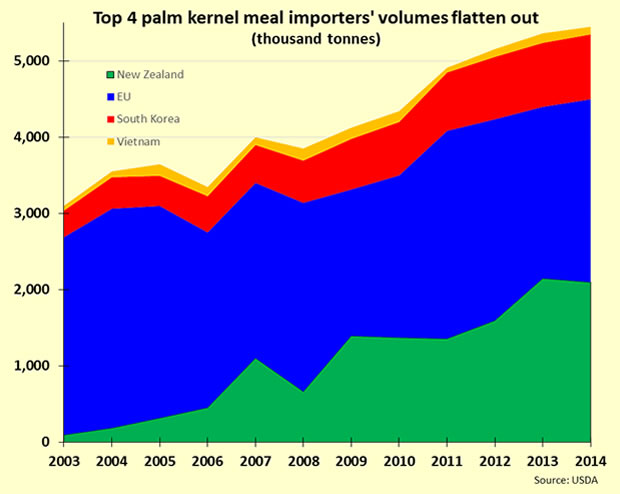 The excess production is expected to bloat Indonesia's 2015-16 closing palm oil inventories to a new record level of a whopping 3.57 million tonnes, which will easily shatter 2014-15's record closing level of 2.19 million tonnes -and it must be stated that closing inventories never exceeded 1 million tonnes prior to 2006 (when the biofuel program was introduced) or 1.5 million tonnes before 2012. The USDA has, for three consecutive years, been forced to revise its Indonesian closing palm inventories upward after making initial projections.
Moreover, with November to March Indonesian exports of palm oil sinking to their lowest levels since the 2008 world recession, closing inventories may have to be revised upward even higher. The poor export performance reflected lower import volumes by China, where a tapering off of cooking oil demand coincided with lower prices for soy-based meals and oils.
Palm feed demand downturn, coincides with everything else
Through palm kernels and palm kernel meal (the latter consumed by dairy cows in Europe, East Asia and Oceania), the deflationary impact of Southeast Asia's palm glut is being transmitted into the feed sector. New Zealand, the EU, South Korea and Vietnam account for over 90% of world palm kernel meal imports. With high feed prices motivating a switch to cheaper meals, the these top 4 palm kernel importers saw the volume of their palm kernel meal imports rise at a 5.9% annual rate in the years 2003 to 2011 inclusive.
However, from 2011 to 2014, even though combined Malaysian and Indonesian palm kernel production kept rising by approximately 7% per annum, world exports increased at only a 3.4% annual rate.
That is due to a situation that is unlikely to change soon: Palm kernel meal can only be consumed by ruminants and in that respect, the world dairy market crashed by up to 50% in 2014. With China's rising domestic production limiting the top importer's apetite for dairy powders, there is not much scope for America, the EU, Australia or New Zealand to materially increase their dairy herds or milk production for several years.
For three years, low world soy inventories, historically poor harvests in Latin America and the US from 2010 to 2012, rising biofuel production, record dairy prices, booming dairy exports and high but falling feed costs resulted the following situation from late 2012 to early 2015: Both soy and palm trading sideways for six months to a year, before falling to a lower plateau.
Now equally bloated inventories of both soya beans and palm oil are coinciding with a dairy market downturn, recovering Argentine soymeal production, falling Chinese soy import growth and a dairy market downturn -all compounded by woefully insufficient biodiesel production. It will be a good time to be a soymeal or palm kernel meal buyer but a difficult time for palm and soy growers.