EU pork exports are off to a good start as shipments in January rose by over 25% to 156,000 tonnes from the same month last year.

The AHDB Pork said this "represented comfortably the best start to the year on record, despite the ongoing Russian ban".

It was noted that, as ever, China remained the key driver of the growth, with shipments more than double their level in January 2015.

Other Asian markets, except South Korea, also imported more pork from the European Union. "This indicates that demand remains strong, despite the slowdown in economic growth, and EU product remains competitive", said the pork division of the UK's Agriculture & Horticulture Development Board.

It said exports of other products rose, such that those for offal were up 30% from a year earlier, at 105,900 tonnes, with stronger sales to Asian markets (except South Korea). Pig fat sales were also up 23% year-on-year although they remained well below their level before the Russian ban in February 2014. China, Georgia and the Philippines were the key buyers.

AHDB Pork sees increased competition from North and South America, especially in light of Brazil's regained access to China. "However, the strong start can only be a positive sign for the year ahead", it stated.

Last year the EU's total pork exports recorded a rather strong growth, rising 11% to 1.74 million tonnes year-on-year, also benefiting from an 82% increase in shipments to China. 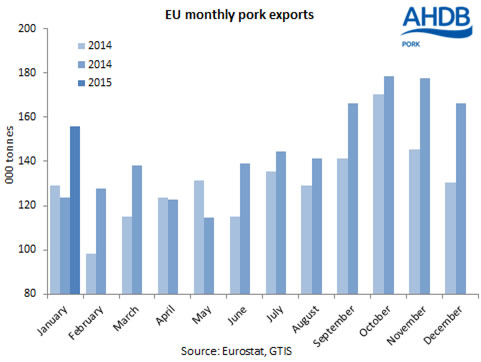