Abstract
Background: In Vietnam, lack of animal health information is considered a major challenge for pig production. The main objective of this study was to assess the seroprevalences of five pathogens [porcine circovirus type 2 (PCV2), porcine reproductive and respiratory syndrome virus (PRRSV), mycoplasma hyopneumoniae (M. hyo), Japanese encephalitis virus (JEV) and leptospirosis] and to better characterize the farm movements through a survey.
Results: A total of 600 samples were collected from 120 farms from Bac Giang and Nghe An. Among unvaccinated herds, the highest seroprevalence was found for JE with 73.81% (95% CI: 68.39–78.74) in Bac Giang and 53.51% (95% CI 47.68–59.27) in Nghe An. Seroprevalences for PCV2 and M.hyo were 49.43% (95% CI: 45.06–53.80) and 46.06% (95% CI: 41.48–50.69) among unvaccinated animals. Accumulative co-infections for JE (86.25%) showed the highest level followed by M. hyo (66.25%) and PCV2 (62.50%). Three co-infections with JE had the highest positive rate (28.75%) followed by four co-infections (25.0%). Medium farms had relatively higher herd prevalences for all pathogens, except from leptospirosis. Overall, farmers exported/imported their pigs at the most 1–2 times every 6 months. Some respondents (5% for exportation and 20% for importation) had moved pigs more than 6 times over the last 6months.
Conclusions: Our study provided another pool of evidence that showed that PCV2, PRRS and H. hyo are endemic in pigs in Vietnam. Given the economic impacts of these pathogens elsewhere, the findings confirm the need for studies to evaluate the association between antibody response and clinical relevance as well as to assess the economic impact of co-infections at farm level. We also found that high seroprevalences of JE and leptospirosis were detected in pigs. From a pubic health point of view, it is crucial to raise public awareness especially for high risk occupations (mainly pig farm workers).
Background
In Vietnam, several constraints to pig production have been identified, most importantly animal diseases, lack of veterinary services, poor nutrition and inadequate animal productivity/genetic make-up [1]. Poor access to animal health information is considered a major challenge for pig production. In addition, more than 70% of producers are smallholders and have low awareness and knowledge on potential disease transmission pathways and biosecurity.
Vietnam's national animal health surveillance program consists primarily of local authorities who collect data daily/weekly (through email, fax and hard copy paper forms) on major animal production diseases only. These include, classical swine fever (CSF), Foot-and-mouth (FMD) disease and porcine reproductive and respiratory syndrome (PRRS). Most cases are reported from small and medium holder farms via passive surveillance. Among reported cases, only a few are confirmed by laboratories while most reported cases are clinically diagnosed by local animal health workers due to lack of diagnostic facilities in rural areas. It can be assumed therefore that most diseases are underreported under the current national surveillance program. 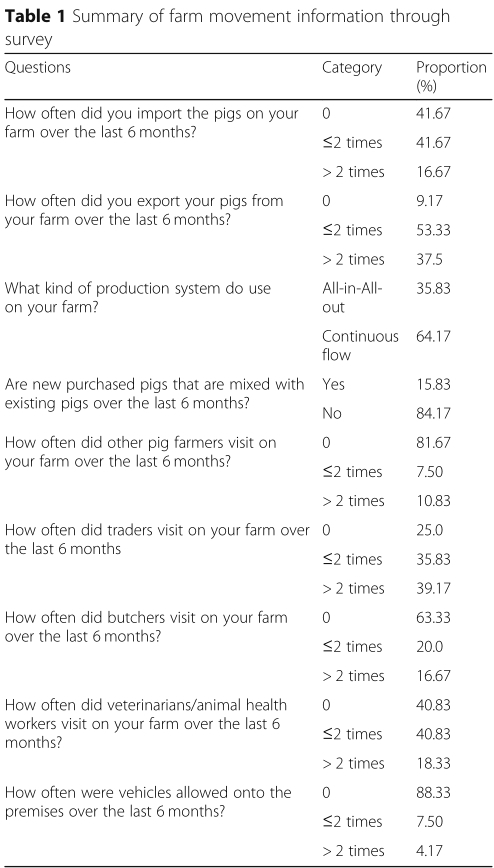 A few epidemiological and serological surveys have been conducted for major production diseases in pigs in Vietnam [2–5]. Recently, using national animal health data, the first national PRRS study was conducted to identify seasonal patterns and clusters [6]. In the area of zoonotic diseases, while leptospirosis is a notifiable disease in humans, only few cases have been reported to the national surveillance system in Vietnam even though the disease is considered to be endemic [7–9]. A recent study showed that the sero-prevalence was 21.05% in pigs from 10 provinces [8]. Japanese encephalitis (JE) is a vector-borne zoonotic disease and pigs are considered to play an important role in amplifying hosts for transmission to humans given that pigs are often raised near human habitations [10]. A recent study showed that the sero-prevalence of JE in pigs was 73.45% [8].
Previous studies suggest that the major risk factors for animal diseases are the regular movement of animals between farms [11–14]. Moreover, transportation and fomites (e.g. body fluids, soil and droplet) can play a role in disease transmission [15–17]. Therefore, it is very important to understand the movement patterns at farm level.
To our knowledge, few studies in Vietnam have looked at a range of pathogens simultaneously. Therefore, the main objective of this study was to assess the seroprevalences of five pathogens and better characterize the farm movements through a survey.
Results
Farm survey and description of farm movement.
A total of 120 pig farmers [26 (Female): 94 (Male)] were interviewed from two provinces (60 farmers/province) (Additional file 1). The median age of respondents was 49.5 and the range was 25–90years old. Almost 90% of people reached either primary to high school education levels. A total of 74.17% farms were classified into small farms whereas large farms accounted for 4.17%. Overall, farmers exported/imported their pigs at most 1–2 times every 6 months (Table 1). Some respondents (5% for exportation and 20% for importation) had moved pigs more than 6 times over the last 6 months. More than 60% of pig farms use the continuous flow systems. Veterinarians and animal health workers visited farms more than 2 twice every 6 months while most of farmers (88%) did not allow vehicles onto their premises.
Seroprevalences of multi-pathogen
A total of 600 samples were collected from 120 farms across the two provinces. Six samples from Bac Giang (three samples each farm from two farms) and one sample from Nghe An could not be analyzed due to hemolysis, while sufficient sera for 9 samples were not available to perform the microscopic agglutination test (MAT) for leptospirosis. The highest seroprevalence was found for JE with 73.81% [95% confidence interval (CI): 68.39–78.74] in Bac Giang and 53.51% (95% CI 47.68–59.27) in Nghe An (to note: none of the herds were vaccinated against JE). Seroprevalences for porcine circovirus type 2 (PCV2) and mycoplasma hyopneumoniae (M. hyo) were 49.43% (95% CI: 45.06–53.80) and 46.06% (95% CI: 41.48–50.69), respectively whereas leptospirosis and PRRS showed the lowest seroprevalences among unvaccinated animals (Fig. 1). 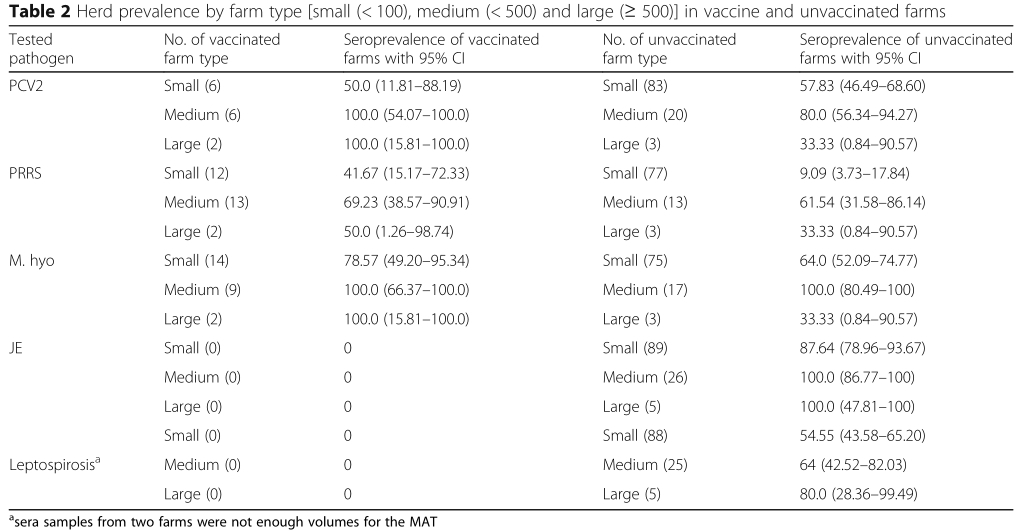 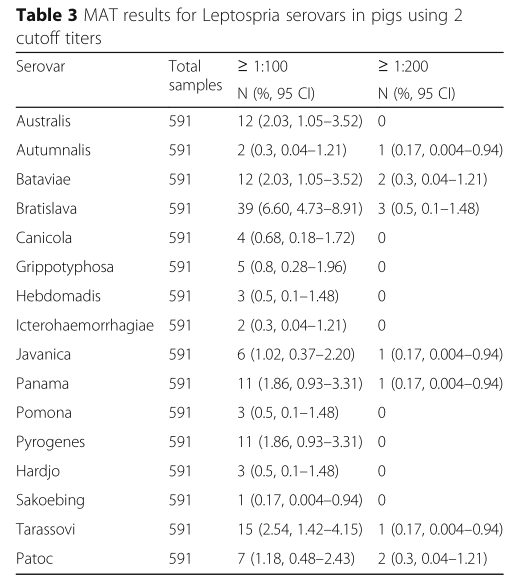 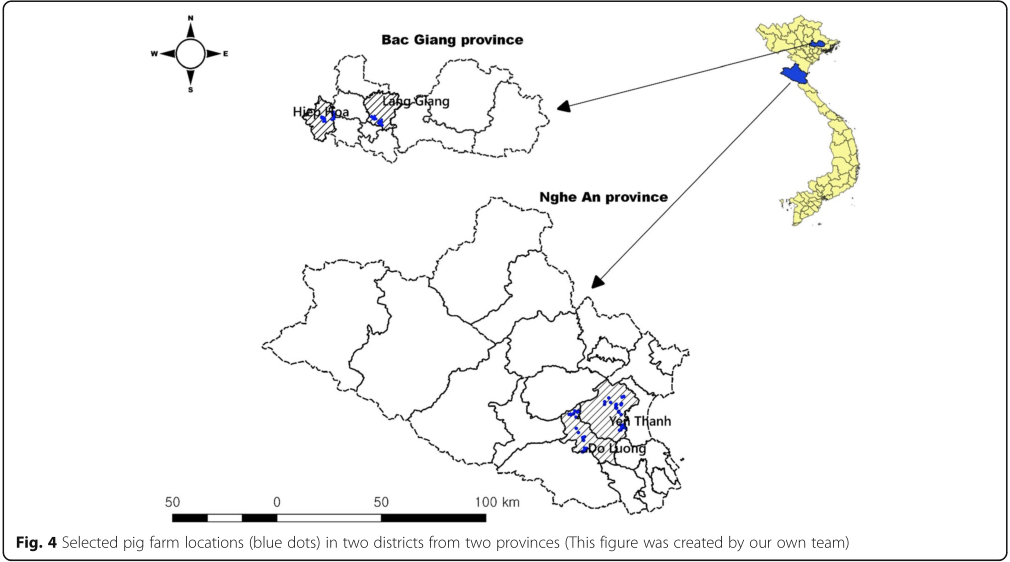 Conclusions
Our study provided evidence that PCV2, PRRS and H. hyo are endemic in pigs in Vietnam. Given the economic impacts that these pathogens have elsewhere, the findings confirm the need for studies to evaluate the association between antibody response and clinical relevance as well as to assess the economic impact of co-infections at farm level. We also found that high seroprevalences of JE and leptospirosis were detected in pigs. From a pubic health point of view, it is crucial to raise public awareness for high risk occupations (mainly pig farm workers) who have higher chances to come in contact with infected pigs, contaminated materials and vectors.
Methods
Study locations and design
Bac Giang and Nghe An are located in the Red river delta and north central coast regions of Vietnam, with an estimated human population of 1.7 and 3.1 million, respectively (Fig. 4) [58]. As of 2017, there were about 1.08 pigs in Bac Giang and 0.89 million pigs in Nghe An. A total of 120 pig farms (60 farms /province) were randomly selected among registered farms from two provinces. Within each province, two districts were selected. Face-to-face interviews were carried out with adults (>18years old) who were mostly involved in pig-rearing. The questionnaires covered demographic information, farm management, vaccination history and farm contact information (on and off farm movements; Additional file 1).
For blood sampling, five pigs (16–20 weeks old) were randomly selected in each farm while farmers were being interviewed. A total of 600 blood samples were collected for evaluating the sero-prevalences of five pathogens [PCV2, PRRS, M. hyo, JE and leptospirosis]. 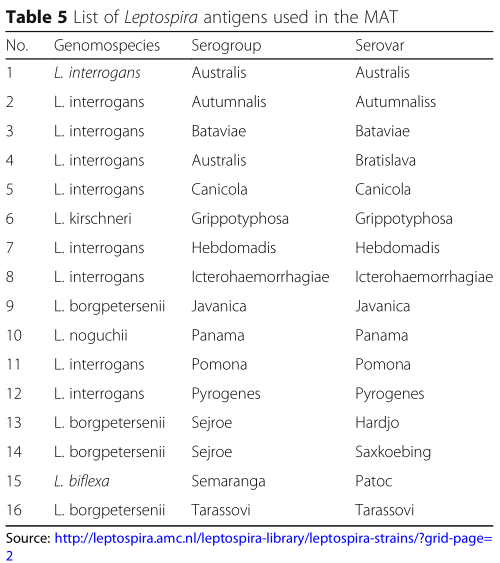 Laboratory analysis
The sera were extracted after centrifugation and kept at −20°C in a cool box until delivery to the National Institute of Veterinary Research (NIVR) in Hanoi. For four pig pathogens (PCV2, PRRS, M. hyo and JE), enzyme-linked immunosorbent assay (ELISA) was used to measure antibodies in pig samples. We followed the guidelines of manufacturer (VDPro PCV2, PRRS, M. hyo and JE AB ELISA; MEDIAN Diagnostics, Chuncheon-si, Gangwondo, Korea). For leptospirosis diagnosis, the MAT was used to identify the positive samples. The MAT results were recorded by using 2-fold serial dilutions of serum samples, beginning from 1:100 to 1:1600 (end-point). A total of 16 serovars (Table 5) were tested as the highest dilution point that agglutinated >50% of live leptospires compared to the control samples were recorded. Positivity was considered as MAT titers ≥1:100 for at least one of the tested serovars.
Data analysis
The selected farms were classified into types based on number of pigs held by farms: small< 100; medium between 100 and 500; large farms≥500 pigs. The seroprevalence was calculated based on the proportion of positive samples with a 95% Clopper-Pearson/Exact CI. It was calculated by vaccinated and unvaccinated at animal/herd level, respectively as vaccination history was collected. Herd prevalence was estimated by the farm type (small, medium and large), which was defined as positive when at least one sampled pig showed positivity.
For positive pathogens, we assessed the proportion of co-infection with other pathogens. In addition, we evaluated the proportion of accumulative co-infection trends among five pathogens. All data were entered into Microsoft Excel 2016 and analyzed using STATA (version 15.1 StataCorp, College Station, TX, USA). 3.5.2). QGIS (Quantum GIS development Team 2018. QGIS version number 3.6.0) was used to create the map.

Article made possible through the contribution of R. Boyd et al.
Video >
Technical Paper >
Synergism between DON and Campylobacter: A challenge for food safety
The close relationship between human health and the pathogenic bacteria present in animal microbiota is a long-standing concern for food safety and the animal food industry. Over t ...
Mitigation of AFB1-related toxic damage to the intestinal epithelium in broiler chickens consumed a yeast cell wall fraction
In vivo experiments were conducted to evaluate the effectiveness of a yeast cell wall fraction (YCW) to reduce the negative impact of aflatoxin B1 (AFB1) to the intestinal epitheli ...
Investigation of the efficacy of mycotoxin-detoxifying additive on health and growth of newly-weaned pigs under deoxynivalenol challenges
Mycotoxins are secondary metabolic products of fungi with toxigenic effects in other living species. Worldwide, about 88% of animal feed and feedstuffs are contaminated with at lea ...