Although the Black Sea is well known for its impact on grain markets, the oilseed complex is also feeling the competition from this region's supply surge, and not even Southeast Asia's early 2014 drought can forestall a deflationary spell. 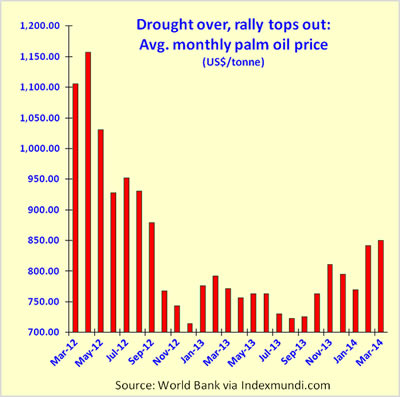 Soy's market fundamentals inside and outside the United States have undergone a huge divergence.  A thin 3.95 million tonne US ending inventory, 4.4% closing US soy stocks-to-use ratio and thin American supply chain inventories. But with the US having gone from supplying 80% of world soy exports in the early 1990s to 38% today, a constellation of market forces are turning in a deflationary direction.
America's tight domestic soy supplies are counterbalanced by world inventories of 70 million tonnes and a global stocks-to-use ratio of 26.2% --with 49 million tonnes of those inventories located in Brazil and Argentina, which account for 49% of world soy exports. But alongside bountiful Latin supplies, demand side trends also point towards deflation.
China, the soy market's biggest customer, suffered a 6%, H7N9 avian flu-induced drop in broiler inventories near the start of 2014. This is putting China on track for feed demand to fall for a second consecutive year for the first time since its agricultural sector was liberalized in the early 1980s.
Moreover, at the end of 2014's first quarter, the country's crushers will have suffered net loss margins for eight consecutive months. Hence, from the viewpoint of both Chinese feed demand and the need crusher's attempt to minimize operating losses, it increasingly looks like China may fall several million tonnes shy of importing the USDA's forecasted 69 million tonnes of soy.
The situation also causes a divergence in demand (and prices) for soymeal and soy oil. With vegetable oil demand unaffected by bird flu, soy oil stayed high in price while prices and net returns on soymeal sagged. This in turn helped boost demand for substitute oilseeds, such as rapeseed and palm oil. With the latter's price holding up well, it helped keep CBOT soy firm in the first two months of this year. However, after getting early year market support from rapeseed and palm oil, these commodities are also deflating and with them, soy's own price outlook.
Palm oil market support tops out
Early this year, a two month Southeast Asian drought arrived shortly after Indonesia boosted the mandatory proportion of biodiesel blended into diesel fuel from 7.5% to 10%, and Malaysia followed with a similar move increase in legislated biofuel content. These changes quickly boosted by nearly 50% the quantity of Malaysian and Indonesian palm oil used to make biofuel. They also happened near the end of two years when Indonesia's impressive 18.2% rise in palm oil output was outraced by a USDA estimated 19.4% rise in domestic palm oil consumption. 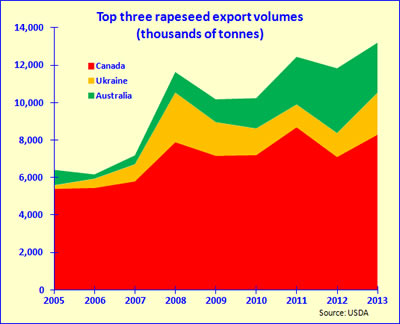 Amid rising, biofuel-driven domestic demand growth and dry weather constraining the volume of palm oil available for export, prices, rallied 24% from lows near US$715/tonne in mid-January. Prices peaked at US$886/tonne in mid-March, when Russia's invasion of Crimea threatened to cut off Ukrainian rapeseed supplies and Southeast Asia's drought showed no signs of breaking.
Shortly thereafter, an inter tropical convergence zone cloud belt re-formed over Southeast Asia, rains resumed –and palm oil fell by 5% over six consecutive days, to US$841/tonne by the third week of March, before rebounding slightly.
Although the current rainy weather must persist for a longer time before the H2 2014 supply situation improves, palm oil's deflation was also demand driven: In response to the higher prices, Malaysian palm oil exports fell 21% in the first half of March compared to a month earlier, as Indian and Chinese buyers sought out less expensive substitutes. Chief among these was rapeseed oil, where the conflict between Russia and Ukraine showed signs of stabilizing –and did not appear to materially impact Ukraine's rapeseed exports.
Booming Ukrainian rapeseed output, bloated Canadian inventories
That was an important development: From 2004-05 to this marketing year, Canadian rapeseed oil exports have risen 137%, Australia's by 198%, and Ukraine's by 2,653%, from 81,000 tonnes to an estimated 2.23 million tonnes in 2013-14. From 2005-06 to 2013-14, Ukraine's rapeseed production increased by a factor of 7.
Between the opening up of new arable land and ongoing yield increases, Ukrainian rapeseed harvests are poised to increase at a 5% to 10% pace over the next decade, and exports can rise at several times this pace. As a result, from near 0%, Ukraine now accounts for 16% of world rapeseed exports and looks poised to overtake Australia as the second largest supplier within a few years.
Over the medium term, to Russia's announcement that it will be business-as-usual for Ukrainian exports must be added the fact that on the other side of the ocean, Canada's ending inventory of rapeseed tripled, from 0.6 million tonnes in 2012-13 to 2.4 million tonnes this marketing year.
Given the huge inventory surpluses of soy in Brazil and Argentina, Canada's bloated rapeseed stockpile, China's exceptionally weak feed demand, and the resumption of rains in Southeast Asia, at the time of writing, the world oilseed market appears poised to weaken over the next two quarters.
So long as US soy and Canadian rapeseed growing weather get off to a good start and Ukraine's rapeseed export momentum proceeds uninterrupted, we can expect gently falling oilseed prices, with price weakness gradually moving from feed meals into vegetable oils, gradually limiting palm oil's scope for upward price movement.