After a decade of torrid consumption growth, the feed crop market's delicate supply and demand balance is visibly shifting in favour of the former. Although the question of slack crop yield growth has not yet been solved, new crop growing regions, new feed crops and slowing demand growth are working to create a more balanced and less oligopolistic market.
Supplies expand, demand slackens
This can be seen in the world corn inventories. At her presentation at this year's Global Grain Asia summit in Singapore, Emily French, managing director of ConsilAgra notes that, "From 70 plus prior to the early 2000s, "the supply cushion bottomed out at 55 days in 2011-12, and is now back at over 60 days and rising." 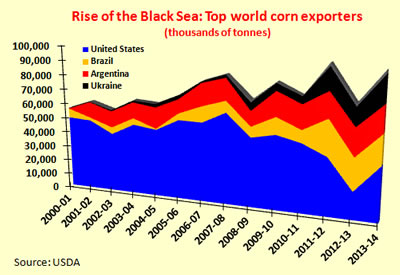 In a break from the pattern of the last decade, French notes that this year, with a Fed-induced monetary contraction taking the wind out of emerging markets, not only is feed demand growth slowing down, but most of the increase is now coming from developed countries. Even here however, with US ethanol output topping out, the feed sector will not face competition for every addition to corn supplies like it did over the previous decade.
On one hand, the long-term problem of corn yields failing to keep pace with feed demand still haunts the industry. On the other hand, with demand growth tapering off and new acreage coming under cultivation in both South America and around the Black Sea, the last year has seen a trend whereby supply is overtaking demand. As a result, whereas annual world corn exports stayed in the 90 to 100 million tonne range from 2006 to 2012, they have now surged, from 100 million tonnes in 2012-13 to a USDA estimated 114.1 million tonnes this marketing year.
Black Sea, logistics, eat up US, Latin American market shares
Along with an impressive increase in supplies, corn has also seen a diversification of its export base. From the 1950s right up to a decade ago, the United States accounted for approximately 60% of world corn export.
From 2000-01 to 2009-10, Brazil and Argentina's combined corn exports jumped 342%, from 6.4 million tonnes to 28.1 million. This growth henceforth tapered off, with 2013-14 combined Brazilian and Argentine exports of 38.0 million tonnes up by respectable but slower 35% from their 2010 volume. On the other hand, from 2009-10 to 2013-14, Black Sea corn exports from Russia and Ukraine jumped 273%, from 5.5 million tonnes back then to an estimated 20.5 million tonnes this marketing year.
There is, of course, a cloud over the latter forecast, in that Russia's occupation of Crimea may upset export commitments, particularly the last 4 million tonnes of corn it was expected to ship out from now to late August. Nevertheless, with US corn closing corn inventories and stocks-to-use ratio at 37 million tonnes and 10.9%,  French opines that, "the US can handle up to 4 million tonnes of Ukraine demand shift and still have more than adequate stocks. It will come at a price [and put the US stocks-to-use ratio at 10%] but it is there." 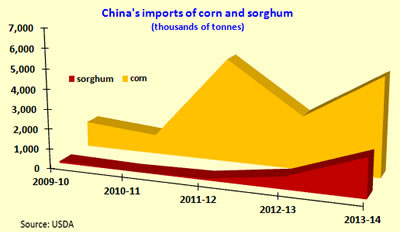 Although it has a sensational short-term impact, such a potential supply disruption cannot stop a longer-term trend well underway: According to Daniel Hofstad, FC Stone's risk management consultant for Eastern Europe and the Black Sea, East Asia's grain imports from the Black Sea region jumped from 2.1 million tonnes in 2011-12 to an estimated 5.9 million tonnes during 2013-14. In particular, its import of feed corn skyrocketed 531%, from 600,000 tonnes in 2012-13 to an estimated 3.79 million tonnes in the current marketing year.
Unlike previous years, the feed corn was not purchased by low-income countries looking for cheap supplies: South Korea and Japan traditionally bought almost all their combined 24 million tonnes of corn from the United States, with only Latin America making minor inroads in recent years. For 2013-14, South Korea's Black Sea corn imports jumped from 100,000 tonnes in 2011-12 to 1.85 million tonnes in 2013-14, Japan's from 300,000 tonnes to 961,000.
In all, the Black Sea's share of South Korean and Japanese corn imports jumped from 1.8% in 2012-13 to 11.5% this year. Indonesia, China, Malaysia, Thailand and Philippines all saw similar hundred or thousand percent increases in their Black Sea corn import volumes. Just prior to Ukraine's coup, China in particular, recently signed an agreement with Ukraine's government to import up to one million tonnes of that country's corn annually. Ironically, if Russia's annexation of Crimea does not disrupt exports, the Ukrainian currency's subsequent nosedive may cause the above Black Sea corn export forecasts to be exceeded.
Moreover, the quantity and quality of Black Sea wheat available for export is rising even faster than its corn harvests. Hoftstad stated that, "milling quality of Black Sea wheat was so high that Turkey and other countries had to buy lower quality wheat for blending for feed." Hence, we may eventually see a return of the widespread feed wheat substitution in place of corn seen in 2010 to 2012.
The Black Sea's export surge also assisted by South America's creaky transport infrastructure. Frederico Humberg, Gavilon Brazil's general manager notes that from 2009 to 2013, Brazilian corn and soy exports increased by 64.5% or 31 million tonnes but, "with no new investments in infrastructure, it translates into longer delays and longer waiting times."
With delays boosting expected delivery times from under 90 days to over 125 days in some cases, some buyers have stopped replacing cancelled Brazilian orders with US corn or soy, opting to shift their business from Latin America to Ukraine and Russia instead.
Sorghum, wheat in place of corn
The feed grain supply base is also being augmented by China's explosive rise in feed sorghum imports, from 4,000 tonnes in 2010-11 to 2 million tonnes in 2013-14. Pablo Altuna, Toepfer Asia's senior manager for grains expects China's sorghum imports to jump by another hefty 50%, to 3 million tonnes in 2014-15.
Nor is it a coincidence that instead of totaling 10 to 15 million tonnes (as was commonly forecasted in 2010), China will only import only 5 million tonnes of corn in 2013-14 -along with 2 million tonnes of sorghum and eight million tonnes of wheat, more than double the previous year's 3 million tonnes.
Importing almost no sorghum or wheat for feed use five years ago, the total volume of corn, sorghum and feed wheat imported is in the 12 13 million tonne range. -That is exactly the volume of Chinese corn imports that had been commonly estimated by this time. Hence, China's substitution of abundant wheat and sorghum in place of corn goes a good way towards explaining why China consistently imports less than half the volume of corn that was expected by this year -and why the world feed crop market is increasingly tends towards supply surpluses.
China will probably follow Japan and South Korea's lead, importing more feed corn and wheat from the Black Sea and less from America and Australia. With all this in mind, ConsilAgra's French expects CBOT corn to float in its current range, with price resistance at the US$4.20/bushel and US$5.00/bushel levels.
Finally, while US corn yields remain stubbornly stuck in the 155 to 160bushel/acre range and other countries also report poor yield improvements, an ongoing 20% increase in Black Sea corn cultivated acreage over two years has compensated for this. Moreover, corn yields are rising most quickly in the Black Sea region itself.
Hence, barring any unforeseen weather events or geopolitical upsets, the market is poised to see several years of feed grain inventory rebuilding and gently falling prices.