March 6, 2020
Coronavirus, trade war politics and the fate of US soybean farmers
Trade war politics devastated US soybean farming but the revenue downturn pre-dates the trade war with China. Coronavirus is forcing China to ramp up soybean imports and partly restore US soy farming fortunes. Why you should expect China to embark on an H2 2020 US soybean buying spree.
By Eric J. Brooks
An eFeedLink Hot Topic
NOTE: The preliminary estimates given below will be adjusted as market information, planting intentions and Chinese meat import information comes in.

The world soybean market remains as oversupplied as ever but a significant change has just happened: After granting special permission to purchase limited cargoes of US soybeans tariff-free in late 2019, March 5, 2020 brought the news that for one year, China will allow crushers to import unlimited quantities of US soybeans tariff-free.
While this does not change 2020's stagnant, deflated soy market forecast, it does carry deep implications in a range of factors ranging from relative market shares to how quickly bloated world bean inventories fall from all-time high levels.
As of early March, soybean export sales to China have totaled just 1.13 million tonnes, down from 5.08 million tonnes in the comparable period of 2019, according to USDA data –but we expect this to change drastically before America's autumn harvest.
When one examines China's motives for its one-year liberalization of US soy imports, the news is very good for both US farmers and Donald Trump's re-election.
Soybean farmers voted en masse in favor of Trump in 2016's presidential election but have been the biggest victim of his trade war with China –and we have good reasons to believe that their pre-2018 soybean earnings will be restored.
To be fair to the Trump administration, the downturn in soybean farming revenues predates their trade war, though the latter made matters much worse. US soybean export revenues peaked at US$24.74 billion in 2012, when America exported only 36.1 million tonnes, of which 24 million tonnes were shipped to China, earning $14.85 billion.
–That's because soybeans traded for an average of US$14.62/bushel in 2012, compared to under US$10.00/bushel from 2016 onwards. That occurred as the world soybean stocks-to-use ratio rose from 20.4% in 2012 to 32.4% in 2019.
By 2016 US soybean exports had risen a whopping 63% above 2012 levels, totaling 58.96 million tonnes, of which 28 million were shipped to China –but export revenues were 7.6% below 2012 levels, totaling US$22.87 billion, of which US$10.5 billion came from China.
America exported over 58 million tonnes of beans again in 2017, with over 33 million tonnes shipped to China. –But with their average selling price falling to US$9.78/bushel in 2017 from US$9.89/bushel in 2016, total revenues fell 5.9%, to US$21.53 billion –as rising revenues from China totaling US$12.2 billion could not offset lower exports to the rest of the world.
Thereafter, impeded by trade war tariffs as high as 30%, US soybean exports to China fell from US$12.2 billion in 2017 to US$3.2 billion in 2018. Last year they rebounded slightly, to US$7.99 billion, after China imported several million tonnes of US beans tariff-free during late-year trade negotiations.
On one hand, the Phase 1 trade agreement between America and China does not commit the latter to buy any specific volume or dollar value of US soybeans. On the other hand, this trade deal commits China to import an additional US$32 billion of US agricultural exports above pre-trade war levels over two years.
The additional US$32 billion of US agricultural imports Beijing opted to import over two years be any combination or volume of American grains, meats, fruits or vegetables. Given China's skyrocketing demand for imported meat, it was initially believed the greatest beneficiaries of the new agreement would be US exporters of pork, beef, chicken and dairy products.
Even when the deal was implemented, some analysts were skeptical about the US$32 billion in additional agricultural exports target being met. Unfortunately, less than a month after the deal was signed, the Wuhan coronavirus epidemic shut down vast sections of China's economy.
Many sectors including retail, shipping, finance, transport, logistics, energy, manufacturing and agribusiness supply chains are being forced to operate at 30% to 60% below normal levels. This has dented consumer incomes, reduced demand for imported proteins and temporarily halted the import of such meats.
With coronavirus causing consumer incomes and meat demand to fall below previously anticipated levels, China's demand for meat and dairy imports has fallen drastically. Instead of expanding by 10% to 50%, many meat and seafood lines have import volumes far below 2018 levels. This will make it difficult for China's policymakers to buy enough US beef, chicken, pork or dairy goods to fulfill their pork importing commitments.
Even so, the coronavirus crisis is expected to impact domestic meat production a lot less than meat demand. This means that China's feed demand and feed crop imports are likely to fall by far less than its meat imports.
Traditionally soybeans were by far China's biggest US agricultural import in both volume and financial terms. The Phase 1 trade agreement implied that China's imports of American soybeans needed to rise back to US$12 billion and total around 33 million tonnes while boosting imports of US protein lines by a collective several million tonnes.
This is because feed crops such as soybeans (US$340/tonne)  and corn (US$153/tonne) are high volume goods that generate far lower revenues per unit than beef ($6,200/tonne), pork (US$2,600/tonne), chicken (US$1,090/tonne) or dairy goods such as butter (US$4,030/tonne) or skim milk powder (SMP) (US$3,026/tonne).  With coronavirus constraining China's capacity for increasing US meat and dairy imports, China can only meet its Phase 1 trade deal commitments by boosting  US soybean imports significantly above previous levels.
Hence, we concluded that if China is serious about meeting tits Phase 1 trade agreement obligations and its meat demand does not rapidly rebound from the coronavirus crisis, its US soya bean imports could rise into the 40 million to 50 million tonne range –with the value of US soya bean exports to China rising into the US$15.0 billion to US$18.5 billion range. 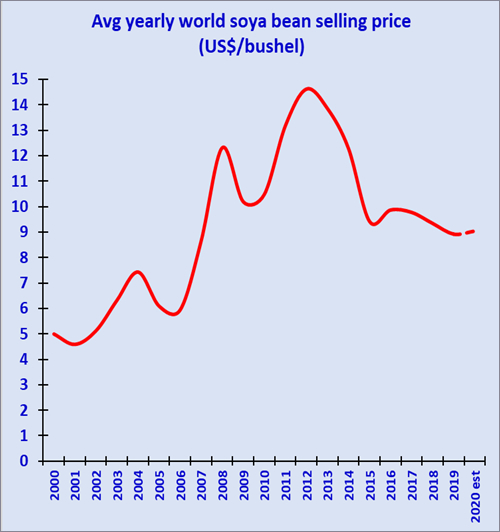 Even with US soya bean exports to other nations falling from US$14.1 billion in 2018 and US$10.7 billion last year and US$7.5 billion in 2020-21 marketing year, a mass re-alignment of world soybean export destinations would ensue from Q3 onwards.
With no significant increase in revenues from US meat export to China expected due to coronavirus, to keep Phase 1 trade agreement US export revenue commitments, it will need to boost US soya bean import volume to near 45 million tonnes, China will have to reduce soy imports from Brazil, Argentina, Paraguay and other nations by a collective 25 million tonnes or more.
Up to 4 million tonnes of the adjustment will come from Argentina, as its government just passed a progressive export tax on its soya bean farmers. Barring further devaluations in Argentina's currency, the new export tax will make it easy for China to buy far fewer soya beans from this nation.
At the same time, at least 20 tonnes of Brazilian soya beans that were bought by China last year will have to go to buyers in Europe or East Asia.
With the total demand for soya beans rising by far less than the magnitude of these trade flow shifts, CBOT soy is likely to stagnate close to the US$9.00/bushel level. Marginally higher world soya bean demand should be enough to make world soya bean stocks decline.
Consequently, should China decide to meet its Phase 1 US import obligations, with coronavirus complicating the forecast, the big winners would be US farmers and Donald Trump's election prospects. The big losers would be Latin American farmers. The latter will also respond to this uncertainty by reducing their planted area for the 2020-21 marketing year, making for an accelerated downtrend in world soybean stocks from 2021 onwards.