French pork exports in decline for 4th consecutive year; imports up 3% in 2017

French pork exports in 2017 declined 5% to over 423,000 tonnes compared with 2016, partly reflecting lower production levels, AHDB Pork reports. It was the fourth consecutive year of decline.

Citing Eurostat figures, the pork division of the UK Agriculture & Horticulture Development Board said that last year slaughterings stood at 23 million head, 2% lower than 2017. Although France exported less last year, more pork was exported in the final quarter of 2017, in line with the wider EU trend.

Whereas China was the main destination for French pork in 2016, last year Chinese import demand was driven down due to the ongoing recovery of Chinese domestic production. As a result shipments from France fell 42% year-on-year. Despite this, China remained a significant destination for French pig meat, accounting for 11.5% of the market share in 2017.

The export decline to China was partially offset by an increase to other markets. Notably exports to Italy increased by 28%, returning Italy as the main destination for French pork in 2017.

Meanwhile, pork imports to France in 2017 were up 3% year-on-year to 290,000 tonnes, all of which came from other EU countries. Spain maintained its position as market leader with imports remaining steady, while Denmark increased its trade with France by 28% to become the third-largest importer of pig meat to France, overtaking Belgium.

Eurostat figures also showed that the total French pig herd, as of Dec. 1, had increased by over 2% year-on-year to 13 million head, driven by a 3% increase in finishing pigs between 20 and 110 kilogrammes. Piglet numbers were also up 3%, ensuring that supplies will remain ample in the short term. 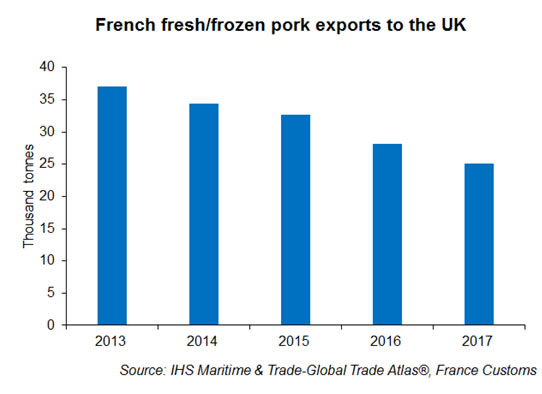