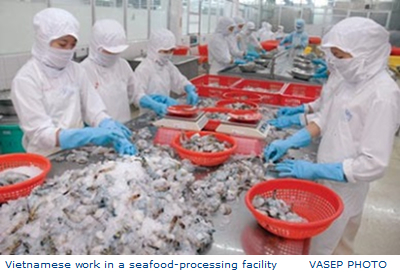 Vietnamese seafood exports in 2016 met the target of US$7.05 billion, representing a 7.3% increase over 2015, despite the fisheries sector experiencing difficulties in sourcing raw materials due to drought, salinity and the trade barriers including anti-dumping tariff in the US market, the Vietnam Association of Seafood Exporters and Producers (VASEP) said.

Except for Canada and Brazil, exports to the top 10 major markets registered positive growths, with Russia having the strongest rate of 122%. Exports to China grew by nearly 40%.

Exports to the EU and Japan recovered slightly by 3.7% and 5.9%, respectively, and in 2017 it's expected to continue rising, though at lower levels than 2016.